If you want to record both the front and rear of your vehicle, then check out a dual dash cam 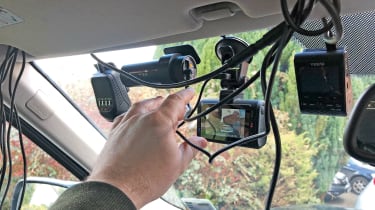 Dual dash cameras (which record the front and rear of your car) have also been gaining popularity. Which is why we conducted a mini test to see what these up and coming dual lensed recorders are all about. How we tested them was almost the same as the main test, although of course, the testing can’t be 100 per cent identical as it was not carried out at the same time. 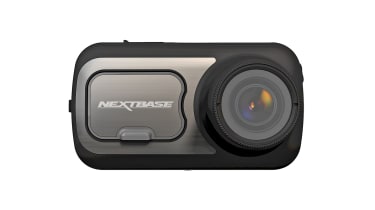 Generally, the Nextbase is much quicker to set up than the other dash cams, with neat magnetic mounts that make it much easier to remove the camera if you want to swap the unit to another car or protect it from theft.

However the sphere-shaped rear camera mounting actually proved a little tricky to fit and it was easily knocked when loading items into the car’s boot.

The touchscreen is easy and intuitive to use, but the real advantage of the Nextbase is the excellent PC/Mac or smartphone apps, which make accurate downloading and editing of footage extremely simple. That footage isn’t quite as sharp as others like the VIOFO, of course, but the front camera has a slightly wider field of vision – 140 degrees versus the VIOFO’s 130 degrees – so it takes in more of the view and the video was still clear and visible in most situations.

It’s unable to provide the almost-forensic detail of a 4K camera like the VIOFO, but the 422GW’s ease of use and value for money means it’s still our favourite dash cam. 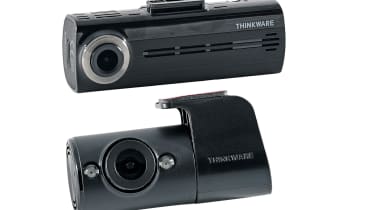 The F200 comes with separate front and rear cameras, mounted on the respective screens with tape. The front camera records in 1080p at 30 frames per second, while the rear unit works at a lower 720p quality. We captured a good amount of detail with the front camera; it adjusted for exposure well and we could read licence plates and road signs easily.

The rear camera lost points for clarity because its footage wasn’t as sharp. Even so, the lens picked up licence plates from a good distance, and offered a better field of vision than the Duo, so we could position it anywhere we liked in the rear window. The F200 has a parking mode and warnings, including red-light and speed-camera alerts. 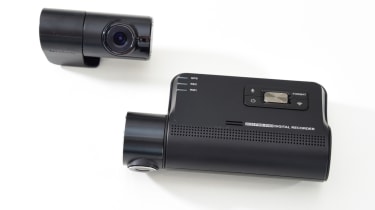 The Thinkware F800 Pro has a low profile that means it looks slightly less intrusive on the front windscreen than some of its rivals, with its rear camera nicely continuing on the design langauge. On the move we were impressed by the set-up’s clarity of recording. The 1080p footage is well balanced and is so good that in the past it’s put some 1440p cameras to shame. The recording also adjusts quickly for exposure; shadows and glare affected it less.

The F800 Pro really showed its teeth in the night test, where we were able to pick out good detail from side streets, saw pedestrians and cyclists nice and quick and had an easier time reading licence plates on parked cars in the dark.

The rear camera impressed us with its clarity of footage, too, and we liked how easy it was to wire in. A sticking point is the price. The F800 Pro costs far more than its entry-level rivals, but it is the better cam. 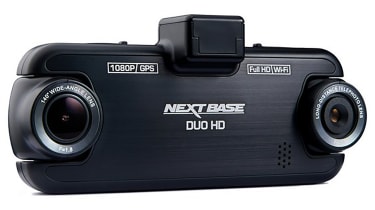 Nextbase’s Duo set-up impresses. The camera is split into two lenses, one facing forward and another that rotates backwards and has a 50-metre zoom. Both record in crisp 1080p at 30 frames per second. We like the fact that the Duo doesn’t have a second wire running across the cabin to a rear camera, while the front lens offers sharp, accurate recordings that captured licence plates and detail well.

The rear unit is sharper than the Thinkware's, but its field of vision is smaller because the rear-facing lens zooms from the front screen. This makes it tricky to position the unit so back seats or passengers don’t disturb recordings.  It didn’t capture everything happening behind the car as a result, although it does have a parking mode.