Which of eight full pliers kits is the perfect pick for use on a car? 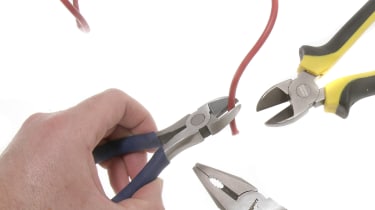 Like screwdrivers and spanners, pliers are best bought as a set because just one limits your options. Combination pliers are great all-rounders, but they’re often compromised by their short, squared-off jaws and limited reach. Slender, long-nose pliers are easier for jobs involving placing, or retrieving, components from recesses. Similarly, side cuts are less fiddly for chopping wires, as combis’ cutting blades are always at the bottom of their jaws.

Many sets include just combis, side cuts and long-nose tools. More comprehensive collections can include water pump pliers, lock-grips and even adjustable spanners. So which is the one to help you get a grip on your car maintenance? We tried eight.

We kicked off by assessing each tool here for grip by attempting to turn threads tightened to increasing torques. During testing we looked at jaw and handle shapes, plus the comfort and effectiveness of the handle grips. We also tried each cutting blade against thick 45Amp cable.

Finally we looked at the tools you get for your money, how smoothly they opened and closed, and whether a decent case or wallet is included. Prices came from various online retailers.

Thw Draper 33057 set wins again with its blend of versatility, quality and ease of use. Yamoto’s basic three-piece YMT-558-9850K and Clarke’s more comprehensive PRO97 are also commended for excellent performance and great value. 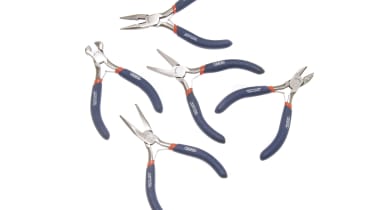 Once again, Draper’s mighty midgets top our pliers test podium. But as the shortest tool is still 125mm, and the longest 150mm, they’re more compacts than true minis. Well-shaped handles and great grips mean they fit better in the hand than many larger tools, and smooth-sprung jaws aid ease of use. The cranked long-nose and end-cut pliers are handy additions to the combi, long-nose and side cuts found in most kits. 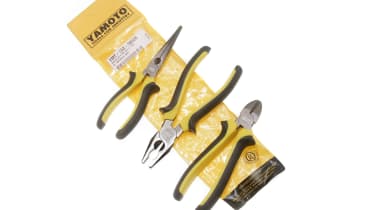 It’s hard to imagine a more basic set of pliers, but what made us like these Yamotos in our last test two years ago still holds just as true now. Put simply, the tools get everything right at a bargain price. All three have enthusiastic and tough cutting blades, and all three are nice to use.

The jaw action is smooth and loose – almost to the point of feeling sloppy. Don’t worry, though, because there’s a reassuring lack of play in any of the tools’ pivots. The handles are comfy but slightly bulky, which makes it fun getting these 205mm-long tools back into that snug wallet. 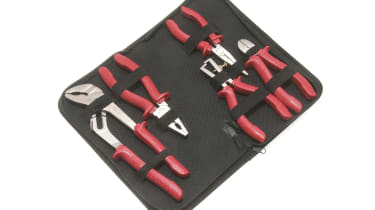 Although not the sub-£20 bargain it was in 2016’s test, this set still packs in a lot of metal for the money. As with Draper, Clarke has chosen wisely with its additions to the core three essential tools. The adjustable, end bladed wire stripper works brilliantly on a wide range of cable sizes. The huge 254mm-long water pump pliers are a little sloppy, but their excess jaw play doesn’t affect performance and they’re a great extra to have included. At around 150mm long, the three core pliers are a step up from the winning Drapers. 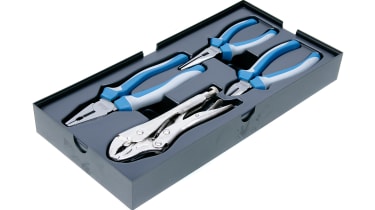 A brand new entry, and part of Halfords’ Modular Tray tools range. Predictably enough, the plastic insert is designed to butt up against other tool trays in a suitable drawer or chest. And although the tray doesn’t offer protection to the tools in the same way as the Clarke PRO97’s wallet, the insert is sturdy enough to hold its own in a toolbox base. The pliers themselves run the Yamotos close for freeness of movement, with no discernible slop in their pivots. And we feel it’s a bit of a masterstroke to include lock-grips in the set, particularly as they work very well, too. 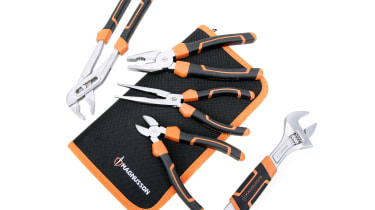 Magnusson impressed us greatly in our recent test of screwdriver sets. But this pliers kit is a little patchier and, ultimately, doesn’t quite justify its premium price. Admittedly, the firm has excelled with its presentation. The tools’ eye-catching colour scheme, well-shaped handles and that smart zip wallet all create the right impression.

Plus, again, water pump pliers and an adjustable wrench are both good extras to include with the core three pliers. But all of the tools lacked the precise, play-free feel of many here. Not that we can complain too much, though; the set comes with a lifetime warranty. 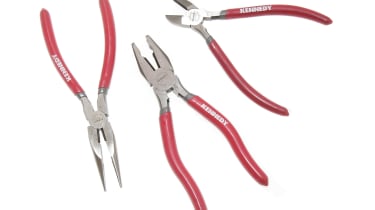 Everything about these pliers screams premium quality. With 180-200mm lengths, each tool allows slightly better leverage than average. Overall finish is a step up on most, too. The handles are really well shaped and their coating becomes more appealing the more you use the tools.

What initially seems like thin shiny plastic proves far grippier than you’d expect from such a smooth surface – even when skin is wet or oily. The bonus is that prolonged use doesn’t agitate the skin like bulkier, rougher designs. If you use pliers intensively and frequently, this set is well worth considering. 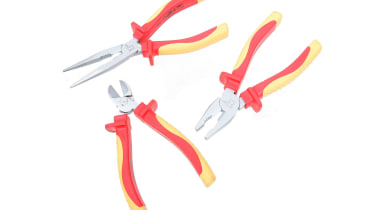 If a penny under 30 quid seems steep for three very ordinary-looking pliers, bear in mind that these are VDE tools, making them suitable for electrical work up to 1,000 Volts. This also explains why the handles are rather chunky. Having said that, they fit in the hand reasonably well, and certainly allow plenty of grip to be amassed.

Numerous tiny raised dots even prevent slip when hands are wet or oily. Overall these are top-quality tools with smooth, slop-free mechanisms and decent blades. But they’re only worth the money if you make use of their VDE attributes. 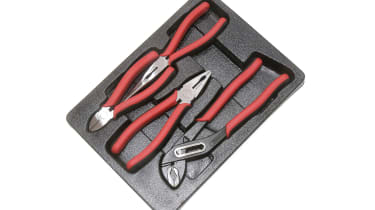 A good budget alternative to Halfords’ 269875? Both sets come in trays, have four tools and are a cut above in the quality stakes. But we’d still opt for the Halfords package despite its higher cost. For automotive work, the 269875’s lock-grip plier is more useful than the water pump pliers supplied in this Sealey set.

And while both sets kick off with rather compact side-cut pliers, the AK8579’s combi pliers, at 175mm, are dwarfed by the Halfords’ 200mm monsters. Both sets are well made and smooth acting. But hit-and-miss cutting blades, and the flimsy storage tray, count against the Sealey.

Take a look at our essential workshop tools page for more of the garage equipment you need.