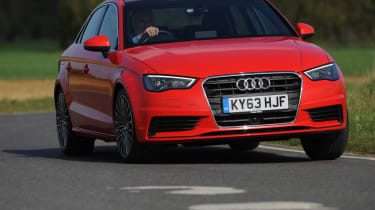 The most efficient engine in the Audi A3 Saloon range is the 1.6-litre TDI diesel, which in its most basic trim has a six-speed manual gearbox and returns 72.4mpg as well as CO2 emissions of 104g/km. When fitted with Audi's quattro drivetrain, emissions increase markedly to 127g/km while economy drops to 60.1mpg.

The other diesel engines in the line-up are the 2.0-litre TDIs. When fitted with the S tronic system in 148bhp guise, the 2.0 manages 62.8mpg and emits 118g/km of CO2. If you stick with the regular six-speed 'box, then efficiency increases thanks to 68.9mpg and 107g/km of CO2. 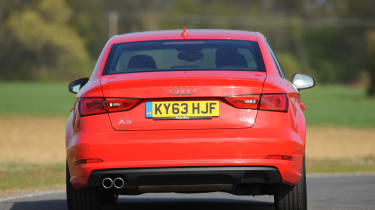 The petrol engines are also efficient. The 1.4-litre TFSI unit with Cylinder on Demand technology and S tronic gearbox will return punchy performance, plus 60.1mpg and 109g/km of CO2. Without the S tronic 'box, it'll still manage a credible 110g/km of CO2, as well as 58.9mpg.

The other petrol engine in the Audi A3 Saloon range is the 1.8-litre TFSI. In quattro spec with the S tronic unit bolted on, it does 42.8mpg with emissions of 153g/km of CO2.

The Audi S3 quattro Saloon is powered by a 2.0-litre turbocharged engine, which produces 296bhp, 40.9mpg and 159g/km. Unsurprisingly, thanks to its performance, it's the least efficient car in the line-up.

Insurance groups for the A3 Saloon range from 14 for the slowest diesel model – the 1.6 TDI – all the way up to group 36 for the high-performance S3 version. The punchy mid-range models are grouped in the early 20s.

Although it’s quite pricey to buy new, at least compared with VW group stablemates such as the Golf and Skoda Octavia, the Audi’s premium badge makes it quite a strong performer on the depreciation front.

The smaller, most fuel-efficient diesel models are expected to do best, but you should be expecting residual values of between 46 and 51 per cent after three years, according to our experts.