While not as fast as a Tesla Model X, the e-tron offers more than enough power and performance for most buyers.

§Electric cars are famed for their instant acceleration and scintillating straight-line performance – and with 664Nm of torque, the Audi e-tron is no different. While it may not be as fast as a Tesla Model X from a standstill - and a softer calibration for the throttle pedal makes it feel less hyperactive than the Tesla - the e-tron still offers plenty of shove and more than enough punch for most motorists.

Instant torque and a quattro all-wheel drive system mean the e-tron launches effortlessly time after time. It makes light work of quick overtakes, and can nip into gaps in traffic that would have long gone by the time diesel rivals’ auto gearboxes had woken up.

On the open road the e-tron impresses with incredible refinement, too. In some EVs, the lack of any engine drone makes wind and road noise even more conspicuous, but not so the Audi. It’s incredibly hushed - especially when fitted with the optional acoustic side windows - making a 70mph cruise feel more like 50.

It’s comfortable, too, thanks in part to the standard air suspension system, which can cycle through various settings and levels of suppleness. Even over twisty, bumpy roads, it manages to glide over surfaces that many other cars would thump across. Both 20 and 21-inch options are available, and both deliver similarly impressive levels of comfort. 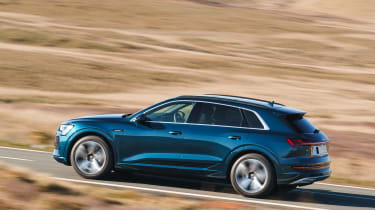 However, the e-tron is a heavy car and struggles to disguise its bulk on twistier roads. At almost 2.5 tonnes, it is more than 350kg heavier than the Jaguar I-Pace, and even weighs more than a Tesla Model X. This harms its agility and can make it feel quite cumbersome through tighter bends. Grip and stability are good thanks to the relatively low centre of gravity, but this isn’t a car you’ll particularly relish hustling along your favourite B-road; an I-Pace is more accomplished in this regard.

But accept the e-tron isn’t a sports car and you’ll find the driving experience can satisfy in plenty of other ways. The regenerative braking system is particularly intuitive to use, and while it isn’t as aggressive as the set-up you’ll find in a BMW i3 or Nissan Leaf, it can sufficiently slow the car on approach to junctions or roundabouts. Unusually, the system also works when you depress the brake pedal; only reverting to the mechanical brakes under particularly heavy loads, which helps to recoup more battery charge.

Whichever way you look at it, the Audi e-tron is a quick car. The 0-62mph sprint takes 5.7 seconds for the 55 quattro version, while the top speed is electronically limited to 124mph in an effort to preserve a usable all-electric range. While that may not be as fast as a Jaguar I-Pace (0-62mph in 4.8s) or a Tesla Model X 75D (0-62mph in 5.2s) it still offers all the torque, power and performance you expect from an electric car. It certainly isn’t slow, that’s for sure. Even the 50 quattro model offers decent pace, with its 309bhp propelling the car to 60mph in 6.8s and a maximum of 118mph.

Response from the two electric motors is instant, while Audi’s quattro all-wheel drive system keeps things in order – and the e-tron pointing in the right direction. Of course, being an EV means there’s little in the way of ‘engine’ noise; there’s just a muted whine from the motors. Refinement is excellent, too.