Technology is first rate; the Audi e-tron is the first production car to be available with fully-digital door mirrors

Audi played it safe with the e-tron’s styling. It’s instantly recognisable as one of the firm’s family SUVs – slotting in somewhere between the Q5 and Q7 in terms of size. It uses a similarly sculpted front grille, as well as an LED rear light bar lifted from the current A7. It’s dimensions aren’t too vast, either, so despite weighing almost 2.5 tonnes, it doesn’t look like a huge car on the road.

Inside, the e-tron feels as beautifully built as any modern Audi, with quality materials covering every surface. There are swathes of leather, polished plastic and high-grade metal trim; the fully digital cockpit gives it a high-tech edge in the SUV class, too.

On Launch Edition cars, that fully digital dashboard is flanked on either side by a pair of swish virtual door mirrors. The tech replaces the conventional mirrors with two hi-resolution cameras, which feed images to a set of small screens in the doors. It’s also available as a cost option (£1,250) on standard models – but in our experience it’s not quite there yet. The main issue is with the placing of the displays. While the passenger side is okay, the driver’s side sits on the door at a shallow angle, as if you’d get a greater view by opening the door by 10 or 15 degrees. The aerodynamic benefit they bring, however, is said to eke out a little extra range. 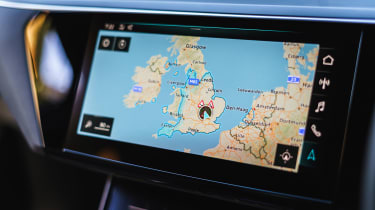 The Audi e-tron lifts its dual-screen infotainment system from the A6, A7 and A8. It’s standard across the range, and compliments the car’s familiar Virtual Cockpit digital dials.

The two full-HD (10.1-inch upper and 8.6-inch lower) displays use haptic feedback to recognise touch inputs. This takes some getting used to, and while the functions aren’t as easy to operate as physical buttons, at least the system makes you aware when something has been selected. The menus are logical enough, but lack the intuitive layout of BMW’s latest iDrive system.

The top-of-the-range Vorsprung trim is loaded with kit, including a head-up display, Audi's Virtual Cockpit Plus system and a Bang & Olufsen audio system.