The Audi e-tron is capable of ultra-rapid charging, but the infrastructure isn’t fully available in the UK just yet

As an electric car, how much the e-tron costs to run will depend on where and when you charge it. Despite being capable of charging via a 150kW fast-charge point, only a few such stations currently exist in the UK. It’s not yet clear whether Audi’s plan to offer easy access (using a single account/card) to 70,000 Europe-wide charge points will be available to British customers.

That means you’ll likely be forced to charge at a maximum of 50kW for the time being, which should top the car up to 80% full in less than 90 minutes. Of course, you can recharge the car overnight using a home wallbox, although no times have been given for this kind of charging.

It's worth noting that Audi's parent company, Volkswagen Group, has entered into a joint partnership with other manufacturers to launch the 'Ionity' network of High-Power Chargers. Using Ionity's 350kW charge network drivers will be able to charge their EVs, where vehicle technology allows, in less than 20 minutes. Being an electric car, the e-tron is exempt from road tax (VED) and escapes the London Congestion Charge, too.

The Audi e-tron can’t match the Jaguar I-Pace’s 292-mile (WLTP) range but counters with super-quick 150kW charging. However, while that would allow you to add 80% of the e-tron’s near-250-mile range in less than 40 minutes, the infrastructure isn’t readily available in the UK. So, like the I-Pace, you’ll be forced to charge at a slower rate, hampering the car’s feasibility for longer journeys. 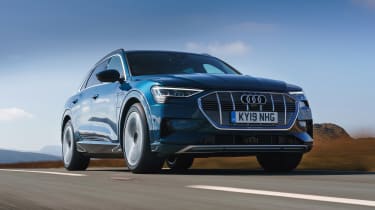 Further to this, our only experience – in the scorching heat of Abu Dhabi, granted – showed the range to plummet faster than Audi suggests. In just 30 minutes we did a little over 50km (31 miles) but lost over 100km (62 miles) of range. But with the air-con on full blast and a higher motorway speed limit (140kmh), this was a particularly tough test for Audi’s first EV.

You needn’t worry about battery degradation, though; Audi offers an eight-year/100,000-mile warranty on all models. That matches the Jaguar I-Pace’s guarantee, and comes in addition to the e-tron’s standard three-year manufacturer warranty. There is currently no option to rent or lease the battery pack, with the cost included in the car’s list price of between £60,000-£86,000, dependent on trim level.

The Audi e-tron sits in the maximum group 50 insurance, as is the all-electric Jaguar I-Pace and Tesla Model X.

Audi claims best-in-class residual values for the new e-tron. However, at 55% (after three years/36,000 miles) it pretty much matches the Jaguar I-Pace pound for pound, although the Tesla Model X holds on to a shade more of its original value, at around 57% over the same period.