Audi usually fares pretty well for reliability and safety, and given the e-tron is fully electric we expect this trend to continue

As the Audi e-tron is so new, there is no specific reliability data as of yet. The fact it’s the firm’s first all-electric production model makes things even harder to predict, but Audi’s reputation precedes it – so we’ve few reservations in recommending the SUV from a dependability point of view.

The highest placed Audi in our 2020 Driver Power Survey owner satisfaction survey was the Q5 (46th out of 75 cars), although various Volkswagen Group models – including the Skoda Octavia and SEAT Arona – placed further up the list. The manufacturer finished 21st overall, ahead of BMW and Mercedes, but behind Jaguar and Volvo.

With regards to safety, the e-tron should prove a tough family car. It achieved full marks in the 2019 Euro NCAP safety test, and every version is fitted with Audi Pre-sense Front and Basic, Lane Departure Warning, Cruise Control and a speed limiter. It also gets a 360-degree parking camera and a host of airbags. 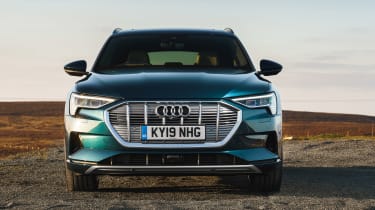 As with any new Audi, the e-tron comes with a three-year/60,000-mile manufacturer warranty. At the time of writing, it was unclear if the firm would offer the same extended warranty options (up to five years/90,000 miles) as it does on the rest of its range.

Audi e-tron servicing costs haven’t been confirmed, but due to the fact there are fewer moving parts than you’ll find on a petrol or diesel car, we expect prices to be slightly lower.

Audi’s standard models fall into one of two brackets, allowing fixed (every 9,000 miles or one year) or flexible (up to 19,000 miles or two years) service schedules. Again, whether the same will be true on e-tron models hasn’t been confirmed.