The Audi Q5 Sportback is the sportier alternative to the brand’s best selling model, and a hot SQ5 variant is also in the pipeline 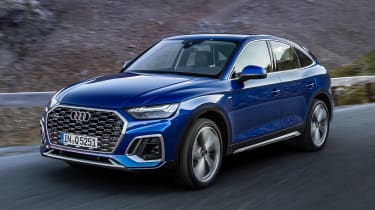 This is the new Audi Q5 Sportback, the German brand’s third coupe-SUV and rival for the BMW X4 and Mercedes GLC Coupe. It joins the smaller Q3 Sportback and the all-electric e-tron Sportback in Audi's growing coupe-SUV line-up.

Intended as a sportier alternative to the popular Q5 - the brand’s best-selling vehicle globally in 2019 with over 300,000 delivered to customers - it will arrive in the UK before summer 2021. Prices should start at around £45,000, carrying a small premium over the Q5.

The design departs completely from the regular Q5 from the B-pillar rearwards, incorporating a sportier, more rakish roofline and shallower rear window, into a rear end with a high-mounted bumper and tailgate. S-Line trim cars get a large singleframe honeycomb grille and more aggressive bumpers. 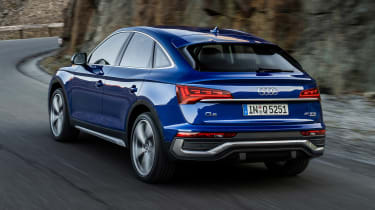 The Q5 Sportback measures up at 4,690mm from nose to tail, which is 7mm longer than regular Q5. It’s just as tall with the new roofline peaking at the same height, but it cuts downwards aggressively from the top of the B-pillar to give the car its coupe look.

For the first time Audi will offer OLED lighting technology, available in the new taillights. This will enable customers to customise the lighting signature of the vehicle for the first time, with three different lighting patterns to choose from.

Inside, the dashboard and front quarters are carried over wholesale from the SUV, with a 10.1-inch floating touchscreen infotainment system and the availability of Audi’s Virtual Cockpit ahead of the driver.

Boot space stands at 510 litres, compared with the 550 litres of the regular Q5. Pushing the rear bench forward (an optional feature) opens up a maximum of 570 litres with all seats in place, while folding the rear bench flat results in a loading area 1,480 litres in size, which is still down on the regular model. 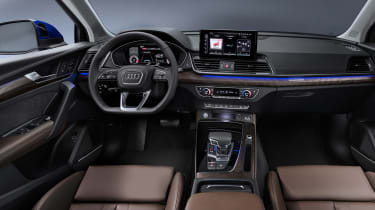 Under the skin all versions of the Q5 Sportback get sports suspension as standard, with adaptive dampers as an option alongside air suspension with adjustable ride height. Engines are shared completely with the Q5, which means an initial choice of four-cylinder petrol and diesel engines.

The launch option is a 2.0-litre TDI four-cylinder turbo diesel engine with 48-volt mild hybrid assistance. It develops 201bhp and 400Nm torque, sending drive to a quattro all-wheel-drive system via a seven-speed automatic gearbox. After launch another 2.0-litre TDI unit is coming, and two 2.0-litre four-cylinder petrol options will also be added to the mix.

Audi will also introduce a six-cylinder TDI option at a later date, alongside a plug-in hybrid version of the Q5 Sportback and also a sporty SQ5 Sportback, using a 342bhp 3.0-litre TDI engine. However, which engines are destined for the UK market remains unconfirmed - something that will be revealed closer to orders commencing early next year.

Click here for our review of the standard Audi Q5...

From electric cars to supercars, this is our list of the best new cars coming in 2021
New Audi Q5 facelift means fresh looks inside and out plus extra tech

The updated Audi Q5 features a range of styling and technology tweaks, including a smaller radiator grille and a larger infotainment system
Audi Q5 review 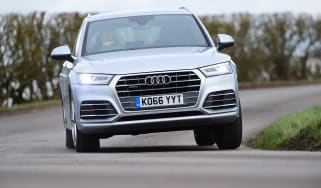 The Audi Q5 is refined and comfortable, but other SUV rivals offer a bit more involvement and agility
Audi Q5 TFSI e vs Volvo XC60 T8