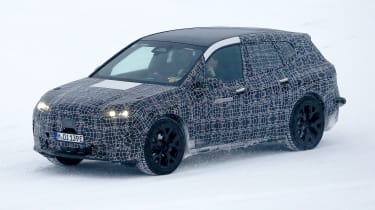 The new BMW iNEXT electric SUV has been spied testing in northern Sweden ahead of its expected arrival in the UK in 2021.

First revealed at the 2018 Los Angeles Motor Show in concept form, the iNEXT will act as the technological halo for the brand’s zero-emissions “i” range, being a larger car than the Audi e-tron and the forthcoming electric version of the X3 - the iX3.

The latest images give very little away, with the test car almost completely shrouded in a dense camouflage wrap. As with previous spy shots the detailing is hard to make out, although the front end of the car looks like it will share design characteristics with the iX3.

This would point towards BMW’s signature kidney grille featuring on the nose, with air intakes either side to smooth the airflow over the front wheels, maximising range. At the rear a pair of brake and reversing lights stick out from the rear bumper, although these are almost certainly temporary units that will make way for a more conventional set-up when the production model is finally unveiled.

Our exclusive image previews how the BMW iNEXT could look when all is revealed. It’ll draw inspiration from the Vision iNEXT concept, albeit with a few practical design changes. Most noticeably, the rear suicide doors will be ditched in favour of conventional units, while the front end will be reworked with a smaller grille and an added air scoop.

The concept’s missing B-pillar will be reinstated, while its wing-mounted cameras will be replaced with conventional rear-view mirrors. However, the concept’s slim LED headlights and swept-back panoramic windscreen look set to be transferred faithfully onto the production variant.

BMW is yet to reveal full information on the iNEXT’s performance and powertrain, but it has discussed its next-generation electric drivetrain and platform plans before. The iNEXT will be one of the first vehicles on BMW’s new ‘common platform,’ which is capable of supporting petrol, diesel, plug-in hybrid and fully-electric powertrains. 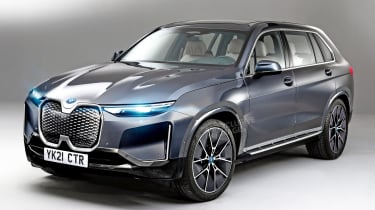 Despite this, the iNEXT will only be offered as an electric vehicle, with a likely maximum battery size of 120kWh. Robert Irlinger, head of BMW’s i division, says the SUV has been designed as a “car for everyday use,” which will provide the means for customers of the plug-in hybrid X5 to move into full electrification.

The company is targeting a WLTP-verified range of 360 miles, which would make it the longest-range electric car in the world with the sole exception of the Tesla Model S Long Range, which can do 379 miles on a single charge.

BMW first teased the iNEXT’s cabin in 2019, offering us a glimpse of the SUV’s polygonal steering wheel and infotainment system. The unconventionally shaped wheel has been designed to allow drivers to easily switch between autonomous and active driving modes, with BMW claiming its squared-off shape makes it easier to recognise the car’s steering angle.

BMW also says the iNEXT’s steering wheel will be fitted with optical fibres which can inform the driver when autonomous driving modes are available for use, as well as indicating situations where the driver is required to retake control of the vehicle.

A floating curved infotainment system, similar to that found on the iNEXT concept, will also feature – albeit without the additional smaller screen tacked onto the dashboard in front of the driver. BMW says it’s held in place by a lightweight magnesium bracket, and is mounted in such a way that the occupants can’t see its physical connection to the dashboard. The screen is also made from non-reflective glass.

Irlinger said: “iNEXT will be ‘all-in’ – everything we can do technology-wise in 2021 you will see in iNEXT. People have been asking why we’ve waited so long, but we waited for the next step in technology – it’s not only battery, it’s autonomous driving and it’s also new systems for communication and connection. All this technology will be new in 2021.”

The iNEXT concept’s cabin is strictly experimental and does not preview the interior layout of the production car. As such, it’s loaded with a range of stargazing features that won’t be seen on the finished item.

Created from a combination of open-pore wood, illuminated crystal glass and textile cloth, the concept’s front compartment features a steering wheel that partially collapses into the dashboard and pedals which fold flush into the wooden floor when the concept is switched into autonomous mode.

The interior is constructed from vegan-friendly materials, and each seat in the boutique hotel-inspired cabin is unique. The lounge-style rear quarters is asymmetrical, with one side assuming a more relaxed position pointing towards the centre of the car. This will allow easier conversation with the front passenger, who is able to fold the headrest 90 degrees backwards to give a clearer view of those behind. 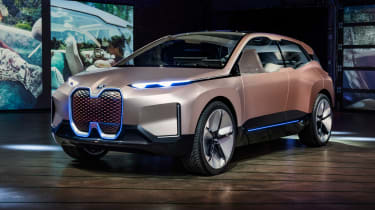 Hidden underneath a veneer of wood on the centre console and embedded in the fabric used on the vast rear bench is a combination of sensors and micro LEDs, which respond to the touch. Pinching and swiping like you would on a smartphone draws illuminated patterns on the surfaces, and allows those on board to control minor features such as music volume.

Similarly, there are no screens in the back of the concept. Instead, BMW showcases what it calls Intelligent Beam, which uses interactive projectors capable of tracking blank books and projecting information and entertainment straight onto the pages as an alternative to displays and tablets.

At just over five metres long, the Vision iNEXT concept is a large two-box SUV, similar in footprint to X5 and in height to an X6. The concept rides on 24-inch wheels, and is free of a B-pillar thanks to a set of ‘suicide’ rear-hinged back doors.

X7 cues are seen in the form of the tall and upright gills placed at each corner of the front apron. The new ‘streamflow’ style window line employed on the iVision Dynamics concept – which will become the i4 – makes it clear that this is an “i” car.

At the front end, extremely slim four-piece headlights sit either side of a huge interlinked kidney grille, blanked off to signify the car’s electric powertrain. In place of the traditional door mirrors are a pair of cameras – one facing forward and one backward – which, in combination with a selection of radars, lidars, cameras, GPS antennas and an external microphone, enable the iNEXT to drive with level 3 autonomous ability.

This will be enhanced further by the inclusion of 5G communication, which will eventually allow the facility for autonomous cars to communicate with each other, even in the sort of busy urban environments which, due to the interference of crowded networks, would be impossible with Wi-Fi or 4G.

Do you think the BMW iNEXT SUV will meet its targeted range? Let us know in the comments section below…