From large scale Lego Technic models to smaller Lego car sets for kids, we’ve put together the best Lego cars on sale for 2019 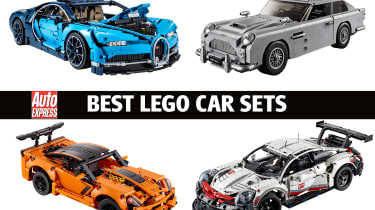 The process of becoming a petrolhead often starts from a very young age, drawing cars in textbooks, playing with toy cars and of course, building your own Lego car sets. Throughout its long history, Lego has always been keen on cars, whether paying homage to famous brands or creating its own unique models the firm has strong links to the automotive world.

In fact, Lego loves cars so much that the company is the world’s largest producer of tyres, beating Goodyear, Michelin and Continental to produce over 700,00,000 tyres per year. Although, it has to be said that Lego’s tyres are on the smaller side.

• The life-size LEGO Bugatti Chiron you can actually drive

Lego works incredibly hard to try and replicate some of the car industry’s best designs and transform them into brick form. From the curves of the Lego Creator Aston Martin DB5 to the complex racing aerodynamics of the Lego Technic Porsche 911 RSR, there is a Lego car set to suit every age range and Lego proficiency level.

Many of these Lego car sets feature intricate working features to mimic their larger metal counterparts. Gearboxes, engines, suspension components and more have all been scaled down to give the most accurate representation of these cars possible in Lego form.

A Lego car makes a great gift for anyone who’s interested in cars or just Lego fans generally. Spending a few hours pouring over the instructions and coming out the other end with a great Lego replica is always a rewarding exercise. That’s why we’ve rounded up 10 of the best Lego car sets currently on sale. Any of them is sure to keep your kids (and you) entertained for hours.

Whether you are looking for an expensive collector's item or in need of a great present for someone you love, you’ll find everything you need in our handy Lego car list. 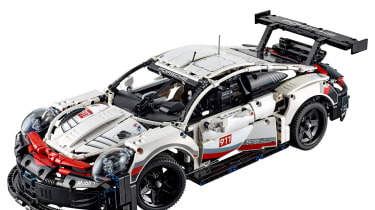 While the Lego Porsche 911 RSR may not boast the impressive 510bhp from the 4.0-litre engine as its mechanical counterpart, it does feature a working six-cylinder boxer engine as well as working steering, all-round independent suspension and a detailed differential. Other features include an accurate replica of the livery, a map of Laguna Seca on the driver's door, and a fire extinguisher located in the cockpit. 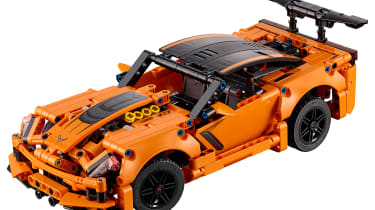 The Chevrolet Corvette is one of America’s greatest cars so it was only a matter of time before it received the Lego treatment. This 579 piece set is based on the fastest production Corvette ever produced, the 210mph ZR1.

With its striking orange paintwork and black decals, this Lego set certainly stands out and matches the real car very closely. There’s a detailed version of the 755bhp V8 with moving pistons, while the exterior features signature Corvette styling elements including the quad exhaust pipes and bonnet bulge. If you get bored with your miniature muscle car then you can transform your ZR1 into another American icon, a hot rod. 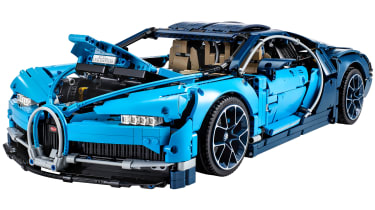 This 1/8th scale Lego Technic Bugatti Chiron is the biggest and most expensive Lego set on this list. At just shy of 3,600 bricks, this Chiron is quite complex to build but features many authentic and realistic parts, from the W16 engine with moving pistons to an 8-speed gearbox operated by movable paddle shifters behind the steering wheel and a special key which activates the active rear wing needed to access the car’s top speed, just like on a real Chiron.

Just as the real Bugatti Chiron is a masterpiece of technical engineering, this Lego version is a showcase of just how complex and detailed these scale models can be and while it may not be able to reach the real Chiron’s 261mph top speed under its own steam, it does cost a fraction of the car’s £2.1million price tag. On that basis, you could consider it the bargain of the century. 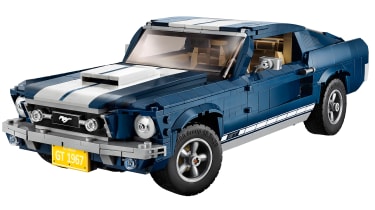 Is there any car more synonymous with a country than the Ford Mustang and its links to the US of A? The car has been a symbol of American muscle for over 50 years with more than 10 million Mustangs produced. It’s even a star of the silver screen after famously featuring in Steve McQueen’s Bullitt film.

Obviously, recreating such a beloved car in plastic brick form will always be a challenge but Lego has pulled it off with great success. With white racing stripes, bonnet scoop, GT emblems and five-spoke wheels, this Lego Creator model is instantly recognisable as the Ford Mustang. The Mustang can also be fitted with different number plates, a supercharger, rear ducktail spoiler, side exiting exhaust pipes, front chin spoiler and a nitrous oxide tank to give it a unique modified look. 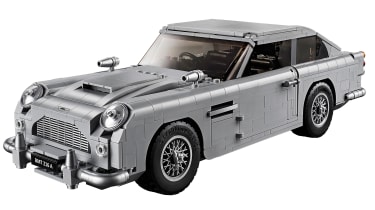 When you think of James Bond, you immediately think of gadgets, girls, guns and Aston Martins - not necessarily in that order. In particular, 007 is forever linked to the Aston Martin DB5. This car has featured in several Bond films over the years but arguably its most memorable role was its starring one in Goldfinger. Jam-packed with MI5 gadgets and with that timeless exterior design, it’s no wonder why the DB5 is often voted as the best Bond car ever.

Lego has not only recreated the design but also filled it with all the gadgets as seen in the film, albeit in less-lethal, more blocky, form. You’ll find revolving number plates, front wing machine guns, a bulletproof rear shield and even a working passenger ejector seat among many other gadgets. Inside there is a concealable radar tracker and a door compartment containing a telephone as well. 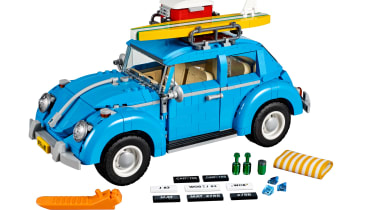 If you missed your chance to get your hands on the original ‘people’s car’ then fear not as Lego is here to help. The Lego Creator Volkswagen Beetle is a detailed replica of the most popular Beetle with authentic features such as a 4-cylinder air-cooled engine, fully accessible beige interior, white rims with distinctive hubcaps and a unique VW printed brick. As this is a 60’s Beetle then there are some period features too such as a cooler box and roof-mounted surfboard for that relaxed American beach vibe. 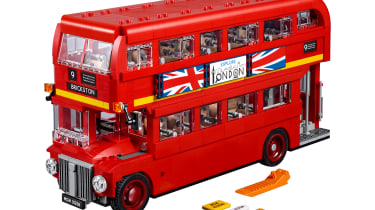 Tourists flock from all across the globe to visit London. Taking pictures of the world-famous landmarks, black taxis and of course, the double-decker buses. Based on an old Routemaster bus, this Lego Creator model is perfect for anyone who wants to reminisce about the good ol’ days of 1950's public transport.

You can explore the retro exterior styling of the Routemaster with its separate driver's cab, complete with sliding door, panoramic windscreen, opening bonnet and reversible advertising boards. Both the upper and lower decks are detachable to let you peer inside at the period interior including the ‘worn-look’ bench seating, half spiral staircase and open rear boarding deck. To make this feel like a traditional bus, there is also a forgotten umbrella, newspaper, empty drinks cans and discarded chewing gum. 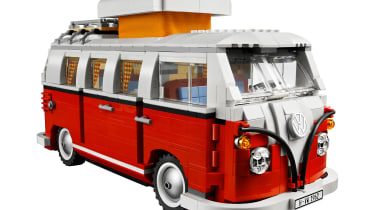 Nothing symbolised the swinging sixties better than the Volkswagen Camper van. Known for ferrying hippies around from festival to festival, spreading love and the message of peace to all, it’s a classic design in every sense.

At some point, everyone has wanted to own a Camper van but costs for secondhand examples can be tens of thousands of pounds. So step forward Lego with its distinctly more affordable 1,300 piece Camper van set for those on a tighter budget.

There is a great amount of authentic detail on this scaled-down version, including opening split safari windshield, iconic pop-up roof with textile curtain surround and even a T-shirt with ‘Make LEGO Models, Not War’ inside referencing its hippy past. Speaking of the inside, the rear bench converts into a bed, while a folding dining table, a closet with a mirror and even a painting to give an authentic feel. 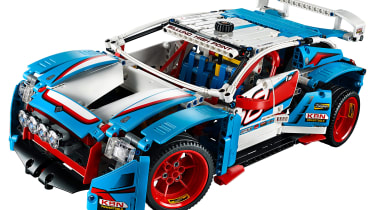 Rallying is one of the most dangerous and thrilling motorsports in the world. Cars flying down dirt tracks, over crescent hills and drifting mere inches away from trees and cliff edges, it truly is unique. The sport has also given us some of motor racing most recognisable cars, from the 60’s Mini to the Lancia Stratos to the Subaru Impreza.

With such a long history, Lego has decided to honour the motorsport by creating its own Lego Rally Car. This remote controlled rally car, while not based on any particular manufacturer model, would fit into any modern-day rally line-up due to its large rear spoiler, quad spotlights upfront and flared wheel arches while under the bonnet you will find a V6 engine with working pistons, suspension, steering and two-fan engine cooling to give an authentic rally car feel. It can also be rebuilt into a Buggy once you’re done playing out your best Colin McRae fantasies. 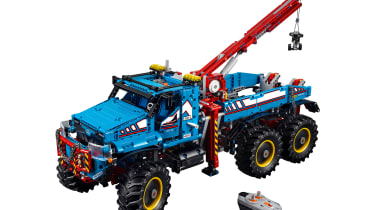 When you think of off-road vehicles your mind tends to lean towards Range Rovers, or perhaps even a Mercedes Unimog for the best go-anywhere machine. Lego disagrees and thinks the ultimate off-roader would look a little like this. This is the All-Terrain Truck and it seems Lego has followed every page in the ‘Big Book of 4x4s’.

Big chunky tires, check. Heavy-duty bull bar; check. Giant crane; check. But this Lego set is more than just a showpiece as it comes with motorised parts and a remote controller meaning the truck can be driven and the crane’s winch and outriggers are operational. It seems like the perfect off-road vehicle, if only it was real.