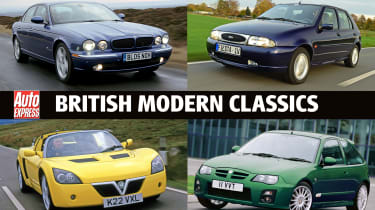 Over the decades Britain has tried its hand in making mid-engined sports cars, luxury limousines, practical hatchbacks and off-roaders so if you’re looking for a modern classic with its roots closer to home, you’ll be well-catered for.

Part of the allure of modern classics is getting a car you can drive every day while its price appreciates. Of course, it’s a gamble as you never truly know how the classic car market will change in the future and what mechanical demons await for your own pride and joy. We’ve done our best to get you ahead of the curve, however, with our list of the best British classic cars you can afford.

We’ve found cars from premium marques like Jaguar, Rolls-Royce and Lotus that have gone on to gain modern classic status but it’s not just premium cars with high running costs that feature. Unassuming hatchbacks like the Ford Fiesta and MG ZR are proving that modern classics can also be affordable and accessible. With prices starting from as little as £100, entry into the modern classic club can be surprisingly inexpensive. 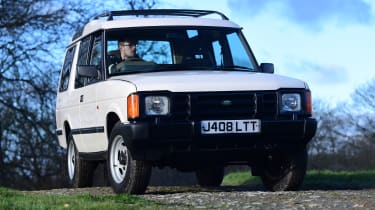 While prices of Land Rover Defenders and early Range Rovers have gone through the roof, Discoverys are still seen as workhorses – and have the prices to match. This is strange, because all these models share the same basic chassis and powertrains, but the Disco has a more comfortable and useful body bolted on top. It does have a tendency to rust, though, meaning early Discovery 1 models are now getting quite rare on the used market.

They can make great starter classics, however. Repairs are easy to do, parts are plentiful and there are loads of friendly owners’ groups to help you along the way. Find a good Disco (or one that needs light restoration) and it makes a useful classic, which will get you through snow and mud, tow almost anything, carry seven people, and be a good investment. The early ones, especially the three-doors, are now genuinely collectable. Just be wary of rust and nasty modifications 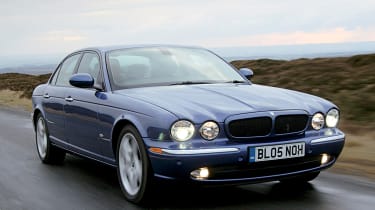 When Jaguar built an all-new XJ in 2003 it made it look almost identical to the old one, just to avoid upsetting loyal customers. Yet it was completely different – and highly advanced – underneath.

Today, those XJ6s (codenamed X350) offer classic looks with modern driving dynamics. An aluminium bodyshell means rust isn’t an issue and it’s pretty light, so you get better economy. We’d go for the 3.0 V6 for its blend of performance and running costs. 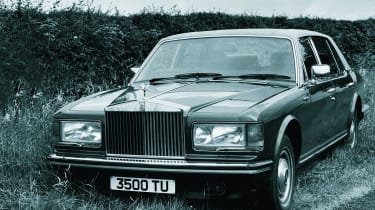 A car that originally cost more than a family house can now be yours for the price of a week’s holiday in Spain. The Silver Spirit was once the preserve of captains of industry and celebrities, prized for its extreme comfort and handbuilt quality. Its boxy looks are unfashionable now and the running costs are potentially bankrupting. It’s also too big to fit in most garages, but choose well, join an owner’s club, find a specialist mechanic, and Silver Spirit ownership can be affordable. 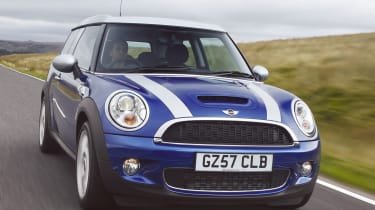 While buyers loved the idea of the new MINI, the fact it was only available as a three-door hatchback limited its appeal, especially for anyone who had kids and the corresponding luggage. MINI’s answer in 2007 was to create a miniature estate, with barn-style rear doors instead of a hatch and a bizarre ‘Club Door’ arrangement on the offside, which gave access to the rear seats. The Clubman wasn’t a huge sales success, but it has got a cult following now, meaning future classic status is assured. 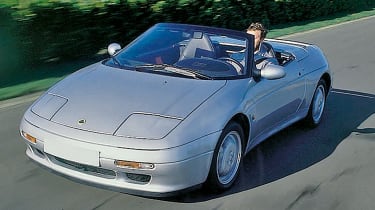 Lotus may be a blue-chip classic car brand, but the reinvented Elan has never really been seen as desirable among collectors. This is mainly due to snootiness about its front-wheel-drive layout and characterless Isuzu engine. The good news is that this has kept prices down to a level where they are affordable, so you could own one of the best-handling cars in the world for less than £5,000. But do some research first, because repairs can be expensive. 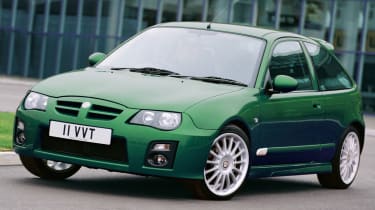 Although it wasn’t considered a class leader when it was new, the MG rehash of the Rover 25 was still a pretty and fun warm hatch. Some keen finance deals and cheap insurance even meant it was Britain’s best-selling ‘hot’ hatch for a while.

Now the ZR is seriously cheap to buy, and most owners tend to scrap them at the slightest hint of a big repair bill. That means they will soon be rare and their values will start to rise as drivers look to relive their youth. Find a good one and you’ll be on to a sure-fire winner. 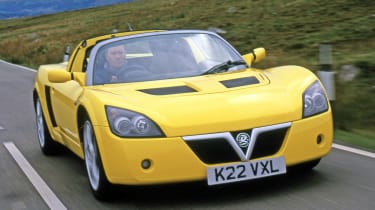 Why would you buy a VX220 when you could have a legendary Lotus Elise for not much more money? Well, in many ways the Vauxhall is the more interesting car, and it will almost certainly be easier to live with.

Underneath their very different plastic bodies, the two cars share the same lightweight chassis, but the VX uses a sturdy 2.2-litre Vectra engine rather than the Mk1 Elise’s temperamental Rover unit. The Vauxhall has a better roof and the handling is slightly tamer, too. It’s not as much fun on a track, but is less likely to catch you out on a damp road.

While that Vauxhall badge means a VX220 will never be as collectable as an Elise, it’ll cost you less to buy. 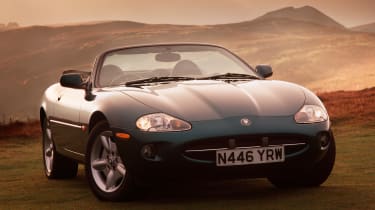 With Jaguar E-Type values in six-figure territory, and even the once-unloved XJ-S getting a lot of interest, it isn’t hard to see what will happen to XK8 values over the next few years. Buy one for less than £6,000, and while you wait for prices to rise, you can enjoy the wood and leather luxury, typical Jag refinement and relaxed performance. Convertible and supercharged XKRs are most prized. 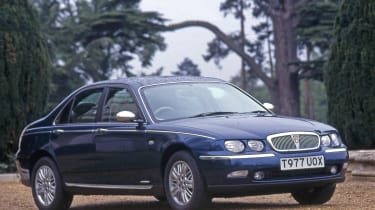 Look in the classified adverts at Rover 75s and you will see a strange split. A used car with the right specification, mileage and colour could be priced at £5,000 or even more, while a seemingly very similar model might struggle to get scrap value.

Enthusiasts have realised that the 75 is arguably the finest Rover ever made, combining the best of British and German engineering; the 75 was built while Rover was owned by BMW. The styling has aged well and it’s relaxing to drive, meaning that this makes a viable classic that can be used every day.

• Most comfortable cars on sale

But enthusiasts do their research and know what they want to avoid big bills and ensure collectability. A range-topping, pre-2003 Connoisseur in a dark colour with light leather interior could be a wise used buy, especially autos with the diesel engine or V6 petrol. These are sought-after and pricey, but find one and you could have a modern classic for a couple of grand. 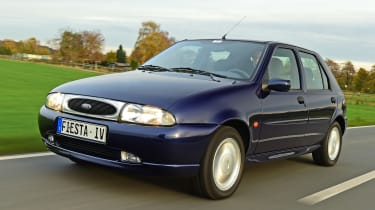 Ford got a kicking in the early nineties for the Fiesta and Escort’s lacklustre talents. The brand took it to heart and made the replacements really fun to drive. The Mk4 Fiesta was a bit of a surprise at the time, with exceptional dynamics and zingy 1.25 and 1.4-litre engines. They’ll never be cheaper than they are now, and as with all Fords, used values will eventually rise – especially on top Ghia and sporty Si versions. 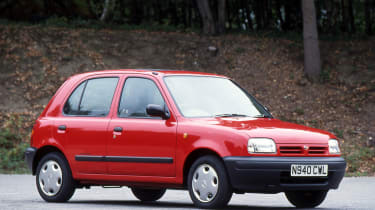 What’s a Nissan doing in the British car category? Well, the ‘K11’ Nissan Micra was not only built in Britain in greater numbers than any other car at the time, it was engineered in the UK, too, at the company’s technical centre in Bedfordshire.

Almost 1.4 million were made in Sunderland – slightly more than the legendary Morris Minor managed throughout its production run. And just like the Minor was for a previous generation, the K11 Micra was the trusted family motor(and first car) for thousands of British people.

Fans will soon be keen to rekindle those fond Micra memories, but the numbers on the road are falling fast due to the Micra’s Achilles heel: rust. There are still plenty of them around, though, so find one that has been cherished or rustproofed and it will give good fun and cheap motoring while you wait for the inevitable classic status to arrive. 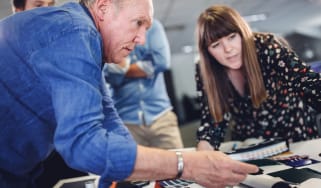 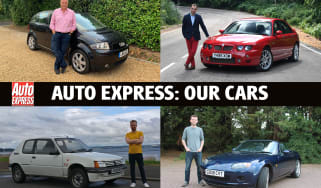 We drive the latest cars for a living, but what motors do we have sitting at home?
Best Japanese classic cars you can afford 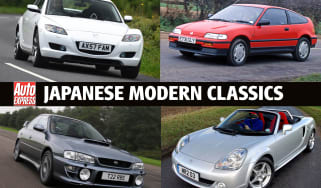