The exterior of the C3 combines lots of Citroen’s recent design traits into a pretty funky-looking package. The front end is dominated by the ultra-slim daytime running lights and a huge double-chevron badge, plus the larger headlights and foglights mounted lower down.

The flanks can either look pretty ordinary if you don’t choose Citroen’s Airbumps textured protective plastic inserts (they're standard on Origins and Flair Plus models but only an option on Feel trim), or quite different from the class norm if you do. And at the rear, there’s a ‘floating roof’ effect created by blacked-out C-pillars. The overall effect is modern and stylish – and, perhaps most importantly, different from the likes of the conservative VW Polo, Skoda Fabia and Hyundai i20.

Don’t climb into the C3 expecting it to be the last word in luxury – but Citroen has tried to follow up the external looks by creating a welcoming cabin that offers something different in the class.

As such, the seats are similar to those found in the C4 Cactus, in that they’re designed to be quite soft instead of offering supreme lateral support during cornering. The dashboard is very simple and, on all but the most basic trim level, dominated by a seven-inch touchscreen that controls many of the functions, including infotainment, heating and air-con. 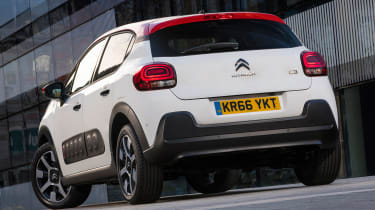 There are some soft-touch materials around the fascia, but the main plastics – those on top of the dashboard and those in the door linings – are hard, although nicely textured. The C3 just about manages to look smart and avoid feeling cheap – but the likes of the Skoda Fabia, VW Polo and even the Renault Clio make a better fist of it.

There are a few neat touches that help the C3 to stand apart, though. The main one is ConnectedCAM (standard on Flair Plus trim), which is basically a camera mounted at the back of the rear-view mirror that constantly records what you’re seeing out of the windscreen. In the event of an accident, it’ll save the preceding 30 seconds and following 60 seconds of footage for use in any criminal proceedings or insurance claim. But you can also use it for more recreational activities, such as just taking pictures of anything you fancy as you drive along; the photos you take are then saved to your smartphone using the bespoke ConnectedCAM app and can then be shared on social networks.

Citroen also reckons the C3 is the ‘mainstream’ supermini with the greatest scope for personalisation – and there’s no denying that the extensive range of colours and options is impressive. You can have any of the nine colours over the entire vehicle, or in combination with one of three contrast colour roofs (in black, white or red) giving a total of 36 possible exterior looks. There are a couple of different treatments of Airbumps, too, further extending your ability to personalise your C3 if you order them.

All three trim levels come with 16-inch ‘Matrix’ alloy wheels as standard, although the Fair Plus models can be upgraded further to 17-inch diamond-cut items.

Citroen was one of the first manufacturers to move to a fully integrated infotainment system that controls not only music and radio but also key vehicle functions, including heating and air-conditioning. The C3 continues this trend, as all models of the C3 get a seven-inch touchscreen mounted centrally and reasonably high up in the fascia. 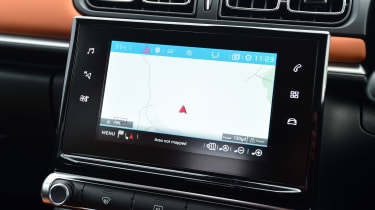 The system includes Bluetooth handsfree connectivity and media streaming, but you’ll have to rely on Apple CarPlay or Android Auto for sat-nav in Feel models.

There’s plenty of functionality, but the touchscreen interface can be a little laggy. It’s the latest generation unit from Peugeot-Citroen, so the graphics are nice and sharp, but the touch-sensitive shortcut keys at either side of the screen aren’t as easy to use as the labelled buttons you'll find in a VW Polo.

Smartphone connectivity is reasonable, with CarPlay catering for Apple users and Android Auto for Android users.