Citroen has a decent record on fuel efficiency from its small petrol and diesel engines, and the C3 continues that trend, even under the tougher WLTP test procedure. The cleanest C3 of all is the 1.6 BlueHDi which emits as little as 117g/km of CO2, while fuel economy of up to 67mpg is quoted.

The core of the C3’s line-up is petrol engines, though, and the 1.2-litre three-cylinder unit does a pretty decent job of maximising fuel economy. The PureTech 82 manages up to 51.3mpg, with CO2 emissions from 130g/km, while the range-topping turbocharged PureTech 110 offered with Flair Plus models emits 130g/km of CO2 with a claimed economy figure of 52.2mpg when fitted with the six-speed manual gearbox. Opt for the EAT6 torque-converter auto and those figures slip to 138g/km and 49.4mpg. 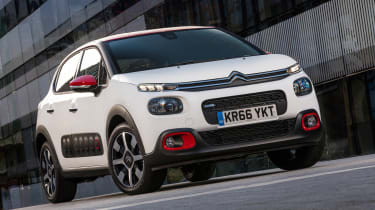 In theory, then, the PureTech 110’s 45-litre fuel tank easily gives a range in excess of 500 miles – and thanks to the tougher WLTP test, that's more likely to be achievable in regular driving. The diesel’s range is more impressive again, of course, and you should be able to travel for 600 miles without worrying about refuelling.

The most basic C3, the PureTech 83 in Feel trim, slots into insurance group 11E; that’s higher than the likes of Vauxhall’s least powerful Corsa, but still pretty reasonable. The same engine but in Origins or Flair Plus trims actually drops to group 8E, which is the lowest the C3 goes in terms of insurance.

The last C3 was a particularly poor performer when it came to resale time, and unfortunately the new car isn't on a par with other superminis. Residuals in the region of 30-35 per cent are well below models like the VW Polo and Hyundai i20. There could be a variation in residual value depending on long-term demand for C3s with Airbumps, as these should help reduce the risk of car park dings. Cars could be depreciation sensitive courtesy of wacky specifications from the personalisation options, too.