Citroen has managed to offer a seven-seat MPV that comes with CO2 emissions below the 100g/km figure – 98g/km to be precise. It’s the BlueHDi S&S manual model which also claims a combined fuel economy figure of 74mpg. That means company car tax bills for family-orientated company car drivers will be temptingly low.

Even the most powerful diesel, the BlueHDi 150, claims an impressive 72.4mpg and 102g/km on 17ins wheels and in manual guise. Pick the same engine with the auto gearbox and 18-inch alloys and the claimed figure drops to 64.2mpg. 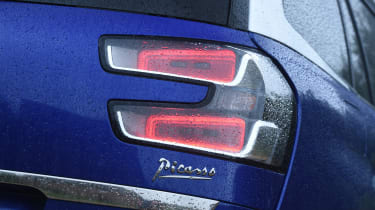 On our test of the BlueHDi 150, the 34.6mpg we averaged was some way below the official figure. You could achieve better in gentler driving, no doubt, but the real-world 45-50mpg of the 1.6 makes it a better bet.

Petrol efficiency looks great on paper too, with Citroen claiming up to 56.5mpg (combined) and 115g/km for the PureTech 130 engine, and 48.7mpg and 134g/km for the THP 165 engine. Expect that to drop to around 40mpg in the real world.

Purchase prices are set competitively against MPV rivals, and all models are very well equipped. So you shouldn’t find your budget becoming overstretched by the need to tick option boxes in the showroom.

A Grand C4 SpaceTourer with the three cylinder petrol engine falls into insurance group 14, while the flagship BlueHDi 150 diesel is group 25. The rates mirror performance-matched versions of the Ford S-MAX almost exactly.

In recent memory Citroen has always suffered on the depreciation front, and the latest SpaceTourer line-up is not likely to be the exception to the rule. Pay out £25k+ for a high-spec diesel model, and you could face the prospect of £16,000 of depreciation over three years – a strong argument for getting a deal up front on the list price. However, the SpaceTourer resists depreciation better than its rival, the Renault Grand Scenic.