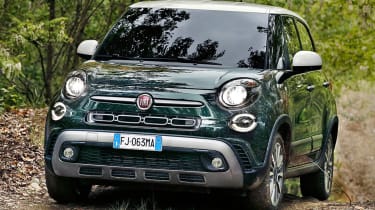 After updating the 500 city car a couple of years ago, Fiat has turned its attention to its 500L big brother. The mini MPV gets a raft of tweaks for 2017 including a fresher look, additional tech and a range revamp, with sales beginning later this year.

Spied in prototype form last year, the revisions to the exterior are as light as we'd been led to expect. Reprofiled grilles and bumpers feature, as does a pair of stylised LED daytime running lights borrowed from the 500, plus new fog and reversing lights. Colour choices have increased, with up to 37 combinations possible. 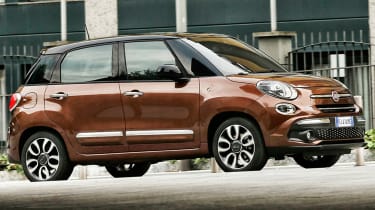 That's not all, though, as the entire range has been renamed with three variants. The Urban remains broadly similar to the current car, while the Wagon is the new name for the longer seven-seat version. The Cross (which used to be called the Trekking) is the model with rugged body cladding, a 25mm ride height increase and a traction-enhancing drive mode selector with 'Gravity Control' - Fiat's showy term for hill descent control.

Safety tech has increased, with autonomous emergency braking added, while a rear view camera will be brought to the range later in 2017. Personalisation comes in the form of various option packs and Mopar's range of 92 parts and accessories.

The engine range is similar, with a choice of a 1.4-litre petrol engine in non-turbo form producing 94bhp, or a 118bhp T-Jet turbo. Fiat's characterful 0.9-litre Twinair two-cylinder petrol is also available with 103bhp - though it's not confirmed for the UK yet. The diesels are the 94bhp 1.3-litre and 118bhp 1.6.

Full prices and specs for UK cars are yet to be confirmed, but we expect to see the facelifted 500L in dealers this summer.

Check out our view on the best MPVs on the market now...