Great performance and smooth, relaxed road manners make the Kona Electric one of the best-driving EVs around 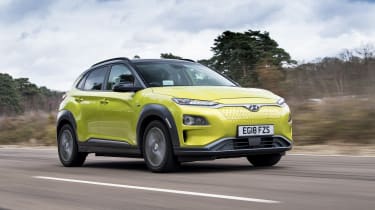 Put simply, the Hyundai Kona is great to drive – it’s surprisingly fast in 64kWh guise, rides nicely and handles quite neatly. It’s not the last word in driver involvement – the Kona takes a more relaxed approach – but there’s enough grip and agility to help you make the most of the impressive power and torque in the most powerful version of the car.

Like most EVs, the Kona Electric’s lack of a gearbox means that engine braking is absent in the traditional sense – instead, the car uses a configurable regenerative braking system that can be used to simulate the effect while also charging the car’s batteries. Switched off, the system allows the Kona to coast off-throttle with almost no loss of momentum, but when dialled up, the car can almost be driven without touching the brakes – you can use the paddle on the left behind the steering wheel to step down gradually, much like changing down gears on an internal combustion car. It has a similar effect to that of the ‘e-Pedal’ system found in the Nissan Leaf, but doesn’t bring the car to a complete stop as that system does.

• Electric vs hybrid vs ICE: which powertrain is best for you?

The Kona Electric is best enjoyed in 64kWh guise – its power and range are genuinely impressive – but those whose journeys are limited to urban commutes could save some money by opting for the 39kWh version. Performance isn’t quite as impressive but it still feels nippy, with a similar sense of instant torque and linear acceleration. It feels faster than an equivalent 1.0-litre turbocharged petrol Hyundai Kona and, while best suited to town driving, can easily keep up on open roads and motorways. 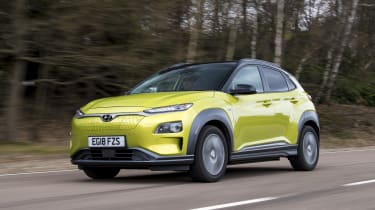 The Hyundai Kona Electric’s single electric motor is available in two power outputs: 134bhp and 201bhp. The first option is the cheaper of the two and comes with a smaller 39kWh battery, but still produces the same 395Nm of torque as the more powerful 64kWh version.