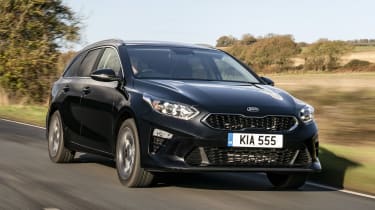 There are only three engine choices in the Sportswagon, and all of them are relatively efficient with no real performance options available. As a result you can expect them all to be cheap to run.

The most economical petrol is the 1.0-litre, which under the latest WLTP measurement regime offers up to 47.1mpg. The 1.4-litre petrol returns up to 44.8mpg, while the 1.6-litre diesel returns up to 58.9mpg, so you’d need to do quite a few miles to make the diesel a cost-effective option. CO2 emissions are 137g/km for the smallest petrol and 127g/km for the diesel, with the 1.4 petrol the worst offender at up to 143g/km of CO2.

There won’t be many shocks on the insurance front for Kia Ceed Sportswagon owners, as the insurance groups are competitive and pretty low. The cheapest models to insure will be the 1.0-litre petrols which fall into groups 12 or 13 depending on spec. The 1.6-litre diesel has a group 15 insurance ranking, while the costliest to insure will be the 1.4 petrol which is rated at group 18. That still makes the Ceed less expensive to insure than some superminis. 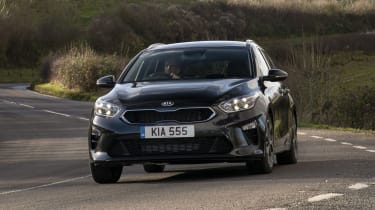 Secondhand values of the Kia Ceed range are expected to be reasonable, and pretty close to mainstream European rivals like the Ford Focus or Vauxhall Astra. The last generation Ceed hatch residuals were decent at 42-47 per cent for petrol models, and 36-44 per cent for diesels – all at three years/30,000 miles. We’d expect the new generation car to do better, as it’s better equipped and better built. Estate models should retain a small extra percentage of value too, thanks to their extra usefulness.