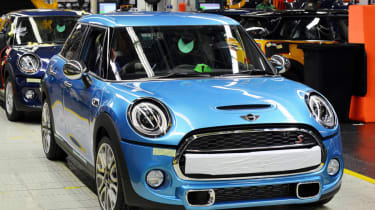 The first ever five-door MINI Hatch has rolled off production lines at the BMW-owned brand’s Oxford plant.

The car will arrive in showrooms this autumn, and will start from £15,900 in basic MINI Cooper spec, with each model costing £600 more than the equivalent standard three-door hatch.

This new five-door model uses a stretched version of that car’s flexible UKL1 platform, which also underpins the BMW 2 Series Active Tourer and will eventually provide the base for a number of future MINIs.

As well as an extra pair of doors, MINI’s most recent offering benefits from more legroom thanks to a 72mm longer wheelbase, and gains an additional 15mm of headroom. Aimed at young families desperate for extra space, there are three seats in the back for the first time, too, along with a boot that’s expanded from 211 litres to a more practical 278 litres.

While the three-door Hatch’s engine line-up carries over unchanged, the five-door is also the first MINI available in an all-new Cooper SD guise, which will make its way across to the standard hatch later this year.

This latest MINI variant marks another phase in a £750 million investment programme across BMW Group UK’s production facilities from 2011 to 2015, an initiative which will help lead to the release of a new Clubman and a Convertible.

The latest MINI offers the quality and driver appeal of a baby BMW, but the design is becoming caricatured
New MINI Electric 2020 review

Small cars come in all kinds of shapes, if not sizes. Here we highlight the best new small cars on sale
New MINI Electric 2019 review 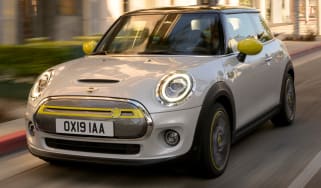