The 2008 got a more muscular look for 2016, while the interior remains classy with a layout that won't suit all tastes

A boxy shape and chunky detailing give the Peugeot 2008 a distinctive shrunken 4x4 look that is desirable nowadays. However, even the 2016 facelift wasn't enough to make it the most stylish car in the class. 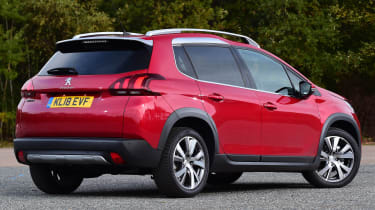 In recent years, Peugeot has made a concerted effort to push its cars upmarket, and the 2008 is proof that this policy has been a success. For a car that’s smaller than most family hatchbacks, it has an unexpected road presence thanks to its rugged and fashionable SUV lines.

The facelift only enhanced the 2008’s visual appeal, with the nose getting a larger, more upright grille plus redesigned headlights and a new front bumper.

The other big change was the addition of extra black cladding, which starts on the front bumper, extends back over the wheelarches and goes all the way to the rear. There are fake skid plates on the front and back bumpers, too, although aside from that new nose, the 2008 appears largely the same as before. Neat detailing, chrome trim inserts and distinctive alloy wheels give it an expensive feel.

Inside, the 2008 feels very upmarket by class standards, although you’d be forgiven for thinking you were inside a pre-facelift 2008. Except for new seat upholstery and a carbon fibre-effect finish across the dashboard, the interior has been left largely unchanged. Peugeot’s i-Cockpit cabin layout has been retained, so the instruments are set high up with a small steering wheel ahead of you.

It's rather more sober than the funky detailing of rivals like the C4 Cactus and Nissan Juke. There are soft-touch plastics on the dash, a smart centre console and blue-rimmed dials. High-spec models offer the plushest trim with lots of lovely metal accents. The quality of the switchgear is also good, although the Citroen feels better built and has a higher-grade feel.

However, unlike in the Cactus, you need to drop the steering wheel into your lap to see the dials, rather than look through the wheel, which some drivers may find irritating. The seats are comfortable, but as in the Citroen, the driving position isn’t the most natural, although it’s something you soon get used to.

The entry-level Access model has a decent level of kit as standard, including a touchscreen infotainment system which includes USB connectivity, a DAB digital radio and Bluetooth phone connectivity. 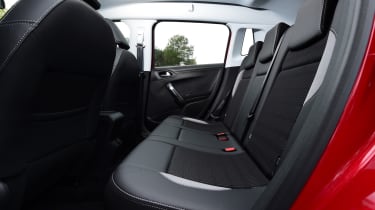 The infotainment touchscreen is clear and very similar to the set-up in the Citroen C4 Cactus, although the scrolling sub-menus take some getting used to, and isn’t as easy to use as some rival systems. Not only is the 2008’s screen overly sensitive to inputs, you have to navigate through a few too many sub-menus for our liking even to perform the most basic functions.

All models get Mirrorlink, Android Auto and Apple CarPlay connectivity as standard. The touchscreen can also be combined with the optional Peugeot Connect Apps USB key that connects via 3G, allowing you to access apps such as live traffic, parking and points of interest information. Allure Premium cars get sat nav and voice recognition.

Part of the problem is the touchscreen that controls everything from the radio to the climate control. It isn’t the simplest system to use; finding your desired DAB station is a bit of a chore, for example.

It’s not made any easier by the fact that the screen often doesn’t register your inputs. Once it has, it can take a while to process them, which can make a simple job such as changing the temperature frustrating, although the facia is at least clean and free of clutter.