V6 twin-turbo power makes the Porsche Cayenne GTS an easier SUV to live with. It's faster and just as sharp too. 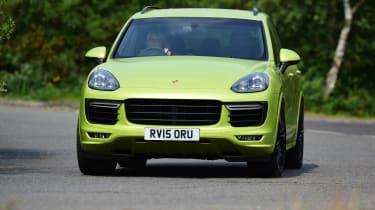 If you like your Cayenne to be fast and powered by a big petrol engine, but don’t want the high running costs of a Turbo or Turbo S, the new GTS remains the pick of the range. The way it mixes agile handling and hot hatch performance in an SUV that still has the ability to tackle off-road terrain is deeply impressive. However, there’s no getting away from the fact that the GTS’s new twin-turbo V6 is just not as thrilling to drive as its V8-powered predecessor.

Porsche's new Cayenne GTS impressed us earlier this year when we sampled it on ice at the company’s winter driving facility in Sweden – but how does it fare on UK roads?

Before we get to that, it’s worth explaining a few things about the GTS. Porsche’s famous three letters have appeared on a host of more focused models for decades, and first graced the Cayenne’s bootlid in 2007. The GTS is designed to fill the gap between the Cayenne S and the ferocious Turbo models, and just like the rest of the range’s refresh last year, it’s been updated to be cleaner and more economical, and gets a minor facelift, too. 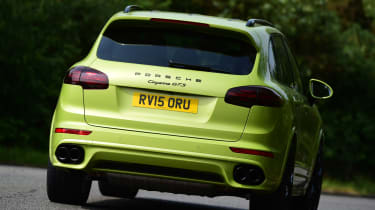 Porsche has replaced the naturally aspirated 4.8-litre V8 with a tweaked engine you’ll find in the Cayenne S – a 3.6-litre twin-turbo V6. On paper, the decision to switch engines looks to be a good one as there’s an extra 20bhp and 85Nm of torque, meaning you get 436bhp and 600Nm to play with. These gains also include a 3mpg improvement in fuel economy, to 28.8mpg, and the GTS now completes the 0-62mph sprint in 5.2 seconds (5.1 with the optional Sport Chrono pack) – that’s 0.5 and 0.6 seconds quicker than the old car.

On first impressions, the switch from normally aspirated to a twin-turbo set-up is good, too. Floor the throttle and that 600Nm kicks in at just 1,600rpm and only dwindles when the revs push past 5,000rpm. And with the eight-speed Tiptronic S gearbox firing through ratios, progress feels faster than the 0-62mph time suggests. 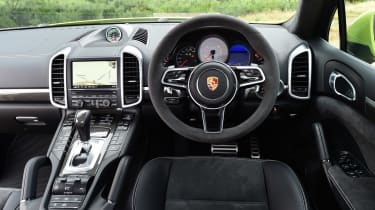 The problem is, by ditching the 4.8-litre V8, some of the GTS’s charm has gone. The eight-cylinder’s growl has made way for a more muted V6 soundtrack. The standard sports exhaust spices things up a bit, but after a while the noise becomes more of a drone than a treat to listen to – a crucial part of a performance SUV.

Putting the engine’s quiet nature to one side, though, the GTS still delights. It comes as standard with steel springs, a 24mm lower ride height and Porsche’s Active Suspension Management. Switch to Sport mode and despite its 2,210kg weight, the Cayenne tackles corners like the best hot hatches around, and yet can settle down to a comfortable cruise in Comfort. The GTS also comes with Porsche Traction Management, allowing an impressive amount of off-road ability, too.

Just like its predecessors, the new GTS is easy to spot as the racy Cayenne in the range. Along with a lurid colour palette, there’s a Cayenne Turbo front end, side sills, extended arches, 20-inch RS Spyder alloys and blacked-out rear lights, while on the inside there’s GTS-branded leather and alcantara upholstery, and electric front sports seats.