Renault has prioritised comfort and refinement over outright driving dynamics, but the Megane still handles well and is a competent motorway cruiser 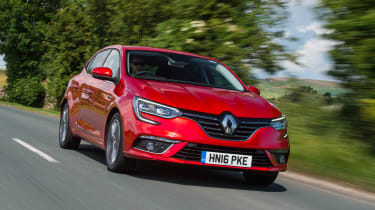 It doesn’t take long behind the wheel of the Renault Megane to discover that the brand’s engineers have focused on comfort and refinement. Not only does it ride well, but noise levels are low. This relaxed approach extends to the car’s outright acceleration, though, with the popular 1.5-litre dCi diesel falling short of punchier rivals.

On the road, however, the diesel Renault feels every bit as eager as a SEAT Leon 1.6 TDI, plus its slightly shorter sixth gear means you’re less likely to need a downshift from the slick manual box on the motorway. There’s decent grunt, and it doesn’t sound too brash, either.

Refinement is impressive, and the Megane rides well, too. At low and medium speeds it soaks up bumps with the sort of supple finesse for which French models used to be famous. It’s also settled at motorway speeds, but sharp ridges send a shockwave through the cabin. Overall, it’s calm and composed.

This emphasis on comfort means the Renault doesn’t handle quite as sharply as rivals like the SEAT Leon or indeed the latest Vauxhall Astra. It’s still capable and poised through corners, but if you’re a keen driver then your money might be better spent elsewhere. 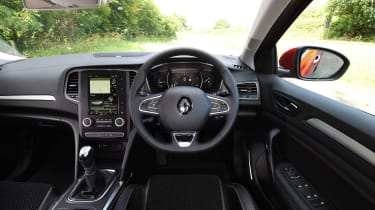 The steering is a little light and the Megane turns in more lazily than the Vauxhall, but once settled, the Renault grips hard. And while there’s some roll, body control is good, with mid-corner bumps failing to knock the Megane off line.

An update to the Megane in 2018 saw the engine range stripped back to just two variants, the 128bhp 1.2-litre TCe 130 turbo and the 108bhp 1.5 dCi diesel. The basic unit is punchy enough, although rivals offer more punch, as we've experienced when we've tested the engine.

With 260Nm of torque, the 1.5 dCi is reasonable, and we recorded a 30-70mph time of 10.7 seconds in one. On the motorway the Renault does feel responsive, so it’s easy enough to keep up with changes in traffic speed without having to shift down.