Diesel fits the Scenic best, while the handling is tidy, although the ride could be a concern on UK roads

Renault isn’t just looking to innovate with the Scenic’s looks; it’s also hoping that the MPV can offer a nicer driving experience than a similarly-sized crossover or SUV. By sitting lower to the ground it has a lower centre of gravity, and Renault doesn’t have to combat body roll by fitting stiff suspension.

That’s only in theory, and given that the Scenic shares its underpinnings with the Megane, you’d expect the family-friendly MPV to deliver comfort and refinement at the expense of sharp handling and driver fun. But on the move it never feels as quiet and composed as its smaller brother or its MPV rivals. 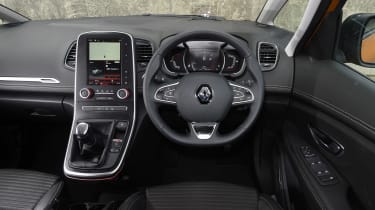 The electrically assisted steering is direct and well weighted, so you can place the Scenic accurately, plus there’s surprisingly little body roll. However, its vast 20-inch alloys are wrapped in relatively narrow 195-section tyres, so the Renault runs out of grip sooner than most rivals. It does remain safe and predictable, though, and the stability control cuts in smoothly.

More of a shock is the firm, brittle ride, which causes the car to fidget and thud over imperfections that a Citroen C4 SpaceTourer or Ford C-MAX soak up without fuss. There’s also some road roar, while the thin windscreen pillars suffer from wind noise on the motorway.

Still, visibility is good thanks to the large expanse of glass and tall windscreen, although it doesn’t come with the nifty sliding blinds you’ll find in a Citroen C4 SpaceTourer. It can be tricky to work out where the bonnet line ends as the windscreen is pushed so far forward and that makes tight manoeuvres in parking bays less than fun.

The Scenic’s petrol and diesel range was updated in 2018 to help the car deliver a better mix of performance and economy. The 1.3 TCe 140 turbo petrol, producing 138bhp, and the 118bhp 1.7 Blue dCi 120 diesel are available in all three trim levels that the Scenic is offered in. As well as 138bhp, the 1.3 TCe petrol has 240Nm of torque, and it manages the 0-62mph sprint in 10.1 seconds. Choosing the EDC auto adds a tenth of a second to this time.

The diesel is a better fit for the Scenic, even though it's not as powerful. The Blue dCi is smooth and refined, plus the six-speed box benefits from a neat shift action. However, you’ll have to make full use of the transmission to keep pace with traffic. The 118bhp engine isn't the most powerful motor when compared to rivals, but the 300Nm torque figure is useful. Still, a 0-62mph time of 11.1 seconds is nothing to write home about, but that slug of torque will help in everyday driving, especially when the car is fully laden.

Renault briefly offered a petrol-electric ‘Hybrid Assist’ variant of the older 1.5 dCi 110 diesel for £1,000 extra. This mild hybrid uses an integrated starter generator and regenerative braking to assist the engine wherever possible – that means it can’t run in silent electric only mode like a Prius, for example. It’s more efficient on paper and works pretty smoothly, although the real benefit is the low company car tax costs.