The Scenic isn't quite as efficient as you might expect

You may be a bit disappointed if you bought the Scenic instead of an SUV hoping for better fuel economy: in reality, the latest WLTP test procedure puts the MPV behind its SUV counterparts. The 1.3 TCe manages up to 41.5mpg in the latest test and emits 135g/km of CO2. These figures are poorer than those quoted for the Renault Kadjar with the same unit.

Add the EDC auto and the Scenic's fuel economy is marginally worse at 40.9mpg, but emissions are slightly better at 131g/km.

If it’s frugality you’re after, however, as ever we’d recommend choosing a diesel engine. The Blue dCi manages up to 51.4mpg on the combined WLTP test cycle and emits 126g/km, while adding the EDC auto to the diesel sees economy tail off to 47.9mpg and emissions remain at 126g/km. 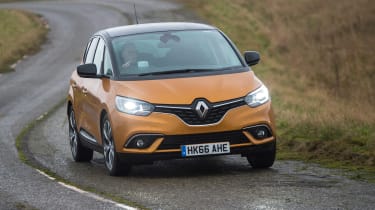 Some buyers may have concern over the Scenic’s 20-inch alloy wheels and the cost of replacement tyres. As a result, Renault has teamed up with a couple of tyre manufacturers to ensure new tyres don’t cost any more than normal 17-inch rubber. They’re actually quite skinny, too, while the sidewall isn’t a particularly low profile.

Insurance groups range from Group 13 to 17, helped in part by the Scenic’s autonomous braking system and five-star Euro NCAP rating. A Renault Kadjar starts at group 19, so the Scenic should have lower premiums.

Traditionally, large Renaults don’t hold on to their value very well, and the MPV sector is suffering at the moment too, so it's no surprise that the Scenic holds on to around 35-38 per cent of its value after three years. If you go for the larger Grand Scenic, then residuals peak as high as 40 per cent. In comparison, the whole Citroen C4 SpaceTourer holds on to a slightly higher percentage of their new values after three years.