Not the most practical people carrier in its class, but a big boot and decent storage makes it better than an SUV

This is where an MPV has to shine regardless of how desirable it is on the outside, and the Scenic largely delivers on the practicality front. For starters, it’s longer and wider than the old model, while the boot is class-leading for a five-seat people carrier.

Up front you’ll find acres of leg and headroom, while the seats have a wide range of adjustment although there’s no fancy electric footrest like on the Citroen C4 SpaceTourer.  The Scenic has quite an SUV-like driving position, too, which will appeal to those torn between the two classes. 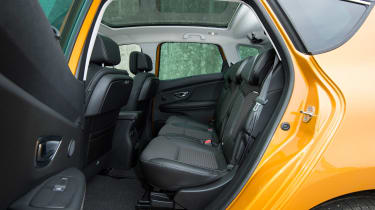 In the back, space isn’t quite as good as the best in the class, but at least there’s a wealth of storage spaces dotted about the cabin, including a central console with 13-litres of space in it that slides smoothly back and forwards depending on what you need from it. There are also compartments under the front seats and rear seat floor, plus a glovebox that slides outwards like a filing cabinet. Further neat touches include little secondary sun-visors that slide out of the main ones to block the small bit of window by the rear-view mirror that usually lets the sun in.

The folding mechanism for the three rear seats is a doddle to use, and as an option the Scenic’s rearmost chairs can be folded electrically either with buttons in the boot or via a menu on the central touchscreen.

The Scenic is 20mm wider than the old model, 40mm higher off the ground and has a 32mm longer wheelbase, yet the rear overhang is 16mm shorter. Buyers can also opt for the seven-seat Grand Scenic, which adds an additional 228mm of bodywork. By comparison, the Citroen C4 SpaceTourer is slightly longer than the standard Scenic but not as wide or as tall.

The Scenic offers plenty of head and legroom for passengers despite top models coming fitted with a panoramic glass sunroof. Kneeroom is a touch compromised by the large dashboard, but overall most shapes and sizes should be able to get comfortable.

The back isn’t quite as commodious, however, as there isn’t a huge amount of legroom for taller adults even with the three seats slid back and reclined as far as they go. A Citroen C4 SpaceTourer is better in this regard.  Headroom is reasonable but not class-leading, although shoulder room is much better than before thanks to the increased body width. 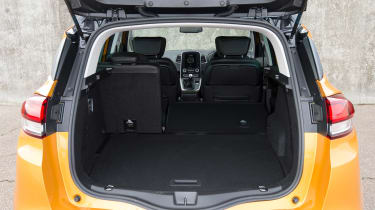 The Scenic offers a class-leading seat-up bootspace capacity of 572-litres, although you have to bear in mind that figure is without the removable boot floor and tyre inflation kit. The boot is well-shaped, but the load lip is a little high and with the seats folded down there’s a bit of a lip to lift items over. The rear bench can be folded at the touch of a button, but this gives a maximum capacity of 1,554 litres – 297 litres less than in a C4 SpaceTourer.