It’s quick off the mark, and now has added range – although the Zoe runs out of puff on motorways

Renault employs a single, front-mounted electric motor in the Zoe, powered by a 52kWh battery. The manufacturer claims the new battery stores 25% more energy than its predecessor, despite having exactly the same dimensions.

The biggest benefit of the new battery in the Zoe is that the range has increased to a maximum 245 miles, although to achieve this figure in real-world driving you'll have to allow for variables such as weather conditions and driving style. Renault itself acknowledges that, in colder winter months, the battery range could be just 150 miles on average.

On the move, the Zoe’s steering feels a little artificial, and with 326kg of batteries to lug around, it’s a little inert compared with the Volkswagen e-up!. Body control isn’t dreadful, but it rolls a bit with those batteries mounted beneath the floorpan, and the Renault seems a tad nose-heavy.

The ride is generally well composed, although the firm suspension can send a thump through the cabin over larger potholes. Road noise is reasonable, but wind noise is intrusive at higher speeds. The grabby brakes make it hard to slow down progressively; a heavy regenerative braking system kicks in when you back off the throttle.

Around town, the light steering and silent running make the Zoe a relaxing drive, and while the light trim reflected in the windscreen of early cars, this was fixed from 2015 models onwards. It’s just a shame the issue of nasty blindspots created by those thick, sweeping A-pillars hasn’t also been addressed.

The Zoe has two available power outputs - the R110 model produces 107bhp with 225Nm of torque, while the R135 variant delivers more straight-line shove with 134bhp and 245Nm of torque. And, don't forget - that torque figure is developed as soon as the motor turns, giving very sprightly acceleration off the mark – 0-30mph in the R135 takes 3.6 seconds .

However, push on and you’ll notice the Zoe runs out of puff, as it struggles at higher speeds and on steep inclines. The R110 version takes 11.4 seconds from 0-62mph, with a top speed of 84mph. The R135 is able to make the same dash in 9.5 seconds, before topping-out at 87mph. 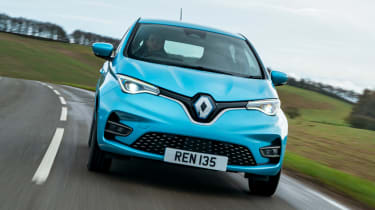 You'll be able to use the standard Type 2 plug, capable of up to 22kW on an AC connection, to charge the Zoe's battery in around three hours.

A 7.4kW home wallbox will take just over nine hours to complete a full charge, while the speedy DC charging is only available as a £1,000 option on i Iconic and i GT Line cars. This delivers an 80% top-up in 70 minutes.