Impressive range, fast charging times and zero emissions all bode well; residuals should be good for an EV. 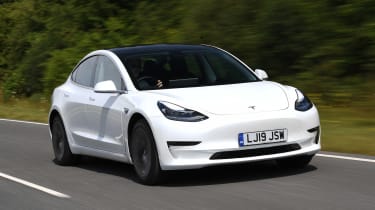 Electric cars traditionally offer lower running costs than their internal combustion counterparts and the Model 3 won’t be an exception. You’ll need to pay to access Tesla’s network of Superchargers to enjoy the fastest charging times, but for the first time on a Tesla you’ll be able to use standard public chargers too.

Road tax is free thanks to the Model 3’s lack of emissions, while company-car users will also benefit from very low Benefit-in-Kind charges – 16% in 2019/20 and 0% in 2020/21. The Model 3 is also exempt from the London Congestion Charge and London Ultra Low Emission Zone (ULEZ) charge.

We are yet to test the Model 3’s range in our own real-world tests but Tesla claims impressive ranges for both models. Its 60kWh battery is good for a range of 254 miles in the Standard Range car, while the 88kWh battery in the Performance version manages a claimed 329 miles on a charge. The Long Range model boasts a claimed 348-mile range.

Owners can pay for access to Tesla’s own Supercharger network, which affords the fastest possible charging options, but the Model 3 gets extra flexibility thanks to the inclusion of Type 2 and CCS ports to allow the use of generic public chargers. The charging port is located just next to one of the car’s rear lights and opens with the push of a button on the charging cable.

Charging your Model 3 should take around 107 minutes via a Type 2 cable for a full charge, or just 36 minutes from zero to 80 per cent via a Tesla Supercharger.

The Tesla Model 3 occupies group 48-50 insurance, depending on the version. However, it also receives a U rating, which relates to an unacceptable standard of security.

The Model 3 was judged, by industry testers Thatcham Research, to only offer ‘Basic’ levels of protection for vehicle security, and its low scores relate to a number of systems, including the fitment and effectiveness of immobilisers, alarms, double-locking systems and wheel security, making the Model 3 potentially more open to theft. However, Tesla are working with Thatcham to rectify the issue, with the car's ability to receive over-the-air software updates potentially a big advantage.

For reference, the cheaper Kia e-Niro sits in group 29 and the pricier Jaguar I-Pace occupies group 50.

Electric cars can suffer worse depreciation than some internal combustion cars, but the Tesla Model 3’s combination of desirability, high demand and relatively future-proof design mean it bucks the trend.