Minimal running costs and tax-breaks are appealing, while Tesla's free charge points are growing in number

The government's green car grant will knock £3,000 off the cost of the Tesla Model S, although Tesla’s Enhanced Autopilot option costs £6,800, which more than cancels out the discount. As it’s an electric car with zero running emissions, you’ll have no road tax to pay, and it’s exempt from the London Congestion Charge, too.

Range is probably the biggest concern for potential owners, although Tesla makes reassuring claims about the Model S’s potential to eke out big mileages. We’ve no reason to doubt the figures achieved under test conditions, but keep in mind that if you want to unleash the car’s performance the achievable mileage will drop. The official range figures vary from 367 miles for the Performance to 379 miles for the 'Long Range'. 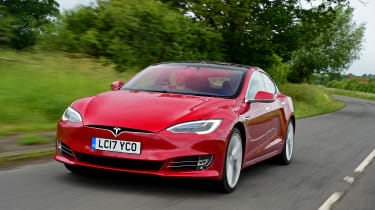 There’s a fascinating table on the Tesla website showing miles of ‘range per charging hour’ available from different types of electrical outlet. The standard domestic plug-equipped charging cable will give you six miles per hour, and the car also comes with a blue three-pin ‘utility plug’ cable that bumps it up to 22 miles per hour. An optional red five-pin plug cable is available from Tesla that offers up to 34 miles per charging hour, but you’ll need an electrician to sort out a three-phase electric supply, for which the costs will be variable depending on your situation.

To maximise charging efficiency, we'd recommend installing a dedicated wallbox with at least the blue utility (‘commando’) socket, as charging a fully flat Model S from a standard UK mains plug will take more than a day to achieve. Even better is Tesla’s Supercharger network, which will recharge a flat battery to 80% in around half an hour, or if you're in more of a rush, it'll provide 133 miles of range in 15 minutes. As of June 2020, Tesla has installed over 500 of its Superchargers in the UK.

They're exclusive to Tesla owners and all new cars come with around 1,000 miles of free charge per year – after which owners will be charged a nominal fee to top up. Even without this facility, however, rough estimates suggest you’ll only spend around £300 a year on charging via the dedicated wallbox.

Whichever version you pick, the Tesla Model S is luxury saloon offers extremely high performance – so you won’t be surprised to hear it has group 50 insurance, a privilege shared with cars such as the Bentley Continental GT and Ferrari 812 Superfast, among others.

Tesla reckons it has an ace up its sleeve with the Model S, as the car’s software packages are updated every few months - much like a personal computer. According to one company source this means the car ‘improves over time instead of depreciating’. This thinking certainly seems to have contributed to strong residual values, as expert data suggests the Model S will hold onto almost 60% of its original value over three years and 36,000 miles.