Punchy engines deliver decent refinement, but the Crossland X doesn’t offer much in the way of fun

The Vauxhall Crossland X is a competent cruiser that’s easy to drive in town, but its soft setup lets it down on twistier, more challenging roads. However, for most that’s unlikely to be of consequence, and rivals like the Renault Captur suffer the same issues.

The soft ride means the Crossland X is comfortable on the motorway, where the raised ride height allows the suspension to smooth larger undulations with ease. This catches the car out at slower speeds, however, where the taller springs struggle to keep up over Britain’s notoriously rutted roads.

Light steering makes the Crossland easy to manoeuvre, but on the open road it’s lifeless and offers little in the way of feedback. The manual gearbox is a bit vague, too, and there is no four-wheel drive option despite its raised body and SUV appearance. 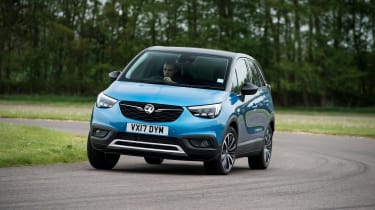 A Peugeot 2008 is keener to respond and while the Crossland X is no worse than the previous (but similarly-sized) Mokka X in this respect, the excellent Astra and new Insignia Grand Sport show how good Vauxhalls can be when the engineers put their minds to it.

Being based on the Peugeot 2008 means the Vauxhall Crossland X uses a very similar range of engines. Those after the cheapest entry-point into Crossland ownership are pointed towards the naturally aspirated 82bhp 1.2-litre petrol engine. It’s available across the range but only comes with a five-speed manual gearbox and does without fuel-saving stop-start technology.

A better bet is the turbocharged 1.2; with 108bhp and 205Nm of torque it’s far livelier and will happily cope with town driving and longer motorway trips. It’ll do 0-62mph in 10.2 seconds and hit 116mph flat out. The more powerful 128bhp turbo model gets a six-speed manual gearbox, but the performance gains are marginal so for most it won’t be worth the extra.

The diesels are expected to account for a large proportion of sales, and by looking at the numbers it’s easy to see why. They post frankly astounding official fuel economy claims, while losing little to the petrols in terms of performance. They aren’t as refined, though, and with the future of diesel uncertain, many buyers may be better off with one of the quieter and still frugal turbo petrol models.