Vauxhall is positioning the Crossland X as a more practical alternative to the Mokka X, but it’s also a more economical choice. As such, you’ll find that many of the engines on offer feature turbocharging and stop-start technology, and there are no expensive, heavy 4x4 models, either. 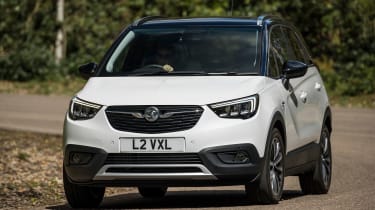 The most economical choice is the entry-level diesel. This turbocharged 1.6-litre with 98bhp delivers a claimed 76.3mpg with CO2 emissions of 93g/km. Opt for larger 17-inch wheels and tailpipe emissions climb to 95g/km. While this makes no difference in terms of road tax owing to the latest VED bands, it does increase the first year BIK rate for company car buyers by one per cent. As for the more powerful 118bhp diesel, a combined figure of 70.6mpg is claimed with 105g/km.

Our pick of the range is the 108bhp 1.2-litre turbocharged petrol, which delivers a claimed 58.9mpg and 109g/km CO2 when fitted with the five-speed manual gearbox. Opt for the automatic and you’ll see your fuel economy drop to 52.3mpg, while CO2 rises to 123g/km.

Official figures mark the 128bhp variant down as being capable of 55.4mpg on a combined run with 116g/km of CO2. A manual gearbox is the only option here. The entry level, naturally aspirated 1.2-litre petrol still delivers fuel economy on par with its turbo siblings – a combined figure of 54.3mpg is claimed.

With figures like these, the Crossland X outclasses the Nissan Juke on paper, as that car’s petrol powertrains all dip below 50mpg. Overall though, the Vauxhall is par for the course when it comes to fuel economy, with broadly similar running costs to a like-for-like Renault Captur.

The Crossland X launches with a broad selection of 26 different engine and trim variants, so it’s no surprise to see a great deal of variation across the range when it comes to insurance groups. The entry-level 80bhp 1.2-litre petrol sits in insurance group eight regardless of trim, meaning the most basic model should be cheaper to insure than its key rivals – the Renault Captur and Nissan Juke – both of which sit in higher brackets.

Higher-power 108bhp 1.2-litre turbo cars fluctuate between groups 12 and 14, though all automatic versions sneak into that lower bracket. The most powerful engine – the 128bhp 1.2-litre turbo – is only available on Tech Line Nav trim cars and up, meaning pricier insurance in group 17 and 18. As for the diesels, the higher powered 118bhp car slots into group 17, with the 98bhp car sitting in group 14. 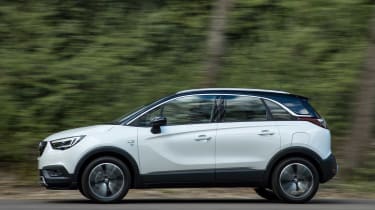 Standard security equipment across all models includes electronically protected audio and infotainment hardware, a luggage area cover, an immobiliser system and remote central locking. Finally, keyless entry isn’t available at all on 80bhp 1.2-litre petrol cars or SE and SE Nav models, but is on the options list elsewhere.

The Crossland X is brand new to the market so we don’t yet have real world results when it comes to depreciation. Nonetheless, expert data predicts that the new model will lose value slightly faster than its larger, Mokka X sibling over a 36-month period. The data suggests that the Crossland X will lose roughly 40 per cent of its value over three years. Our engine choice – the 108bhp 1.2-litre turbo petrol – will be least susceptible to depreciation.