Practicality is a strong point for the Crossland X. The tall, upright and square body means there’s loads of room inside for passengers and luggage, with plenty of storage solutions dotted about the cabin. It’s only available with five seats but there should be more than enough space inside for most families.

The driving position is good and extremely comfortable over long distances due to its elevated stance and supportive seats. The car’s large glasshouse makes the cabin feel light and airy, but the way the dashboard stretches out ahead of you can make parking tricky. The short rear overhang ensures reversing isn’t so hard, while the £455 reversing camera should limit dinks and dents for less confident drivers.

At 4,212mm long, the Crossland X is slightly shorter than the previous Meriva, though being a few millimetres wider (1,825mm vs 1,812mm) gives it a more purposeful stance. The black body cladding raises its profile, while scuff plates front and rear give the Crossland X a sense of style so important in today’s market. 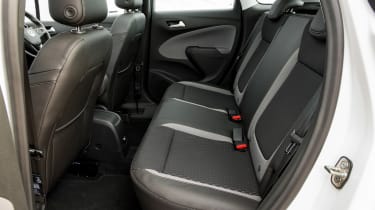 Those dimensions are broadly similar to the Mokka’s, but make it considerably larger than a Nissan Juke. Parking is a little tricky in the Crossland X due to the long dashboard and steeply sloped bonnet, but a short overhang at the rear means reversing is simpler.

There is no denying the Crossland X is a practical car. In the transition from MPV to SUV, the versatile family car has lost none of its family-friendly flair. There is loads of room up front, while in the back you’ll find space for three adults thanks to the fact that there’s plenty of head and shoulder room.

You can improve things further with the good value Versatility Pack (£375), which adds a sliding rear bench and 40:20:40 split-fold seats. This allows passengers to prioritise legroom or cargo area depending on yours or their needs – boosting boot space by up to 110 litres.

All Vauxhall Crossland X models boast a 410-litre boot with the rear seats in place. The Versatility Pack boosts load capacity to 520 litres, which helps the family SUV trump cars in the class above; like the excellent SEAT Ateca.

Fold the seats down and the Vauxhall Crossland X gives a 1,255 litres total capacity, and the large, square load bay means it’s easy to load bulky gear – and the lack of a load lip ensures sliding heavier objects in is no trouble either. That Versatility Pack also adds 40:20:40 split-fold rear seats, which could come in handy if you regularly carry longer items. 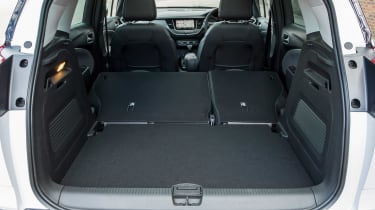 26
Go Back toInterior, design and technology
Continue ReadingReliability and Safety