The Grandland X doesn’t have the biggest boot in its class, but it’s still a seriously spacious SUV 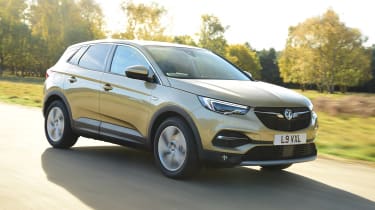 The Vauxhall Grandland X is a practical family car. It has a roomy interior and a big boot, with plenty of useful cubbies and storage spaces. Visibility is excellent, with a typically raised driving position and plenty of adjustment in the seat and steering wheel.

The five-seat SUV (there is no seven-seat version) has loads of space in the back for adults and children alike, with ISOFIX points on each of the outside seats. There are lots of storage spaces, including one ahead of the gear lever and one in the central armrest; the door bins are a decent size, and the glovebox is spacious, too.

Those after a little extra convenience should look at the inclusive option packs, which add things like parking sensors and a reversing camera, as well as LED lights and a tow bar.

The Vauxhall Grandland X is 4.47m long and 1.81m wide. It doesn’t feel like a cumbersome car on the road, but those after something a bit easier to park might be interested in the firm’s smaller SUVs: the Crossland X or Mokka X. The SEAT Ateca is shorter, but slightly wider.

Space in the back of Vauxhall’s Grandland X is very generous. The flat floor means there’s room for three across the rear bench, with plenty of head, leg and knee room. The large windows and light-colour headlinings mean it never feels dark, cramped or claustrophobic, either. 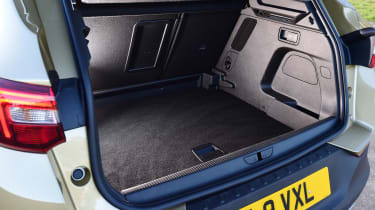 There’s no seven-seat option. Whereas Peugeot offers a seven-seat 5008, Vauxhall buyers seeking an additional two seats in the boot will need to look at the Zafira Tourer or the van-based Combo Life. Every Grandland X gets three ISOFIX points, including tethers on the front passenger seat.

The Vauxhall Grandland X’s 514-litre boot is easy to access thanks to the big, wide, and square tailgate. A Peugeot 3008 is marginally bigger with the seats in place, but fold things flat and the load bay booms to 1,652 litres – two litres more than you’ll find in the Peugeot, and almost as much as some cars in the class above. A Kia Sorento, for example, provides a 1,732-litre load bay with all five of its rear seats folded flat.

How much your Vauxhall Grandland X can tow will depend on which engine you choose. The basic 1.2-litre (130ps) turbo models will tow a 1,400kg braked trailer, reduced to 1,300kg if you go for the automatic model.

The 1.5-litre diesels – with their punchier engines and improved torque – are better, boasting 1,500kg and 1,300kg maximums for the manual and auto models respectively, while the Hybrid4 all-wheel-drive model has a towing capacity of 1,250kg