Volkswagen has revealed the 314mpg XL1 two-seater, and it's set for limited production later this year 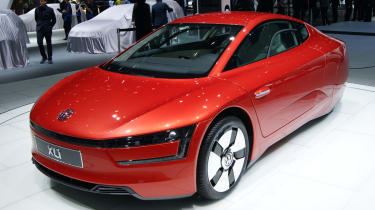 Volkswagen has revealed the production version of the XL1 diesel-electric hybrid; a car that Volkswagen claims can travel more than 62 miles on one litre of diesel – or £1.45-worth at the current average price.

The lightweight two-seater has previously been revealed in concept form, claiming similarly staggering figures, but now Volkswagen has confirmed the final fuel economy and emissions numbers to be 314mpg and 21g/km of CO2.

The impressive efficiency is down to its low kerbweight, aerodynamic design and frugal powertrain. The XL1 weighs 795kg because it has a body made mostly of carbon-fibre-reinforced plastic and an ultra-thin glass windscreen. The body itself weighs just 230kgs.

Lightweight doesn't mean flimsy, though, with the carbon-fibre-reinforced plastic providing a high-strength survival space in the case of a crash. Front and rear aluminium structures are present to absorb most of the crash energy and the gullwing doors are fitted with explosive bolts so drivers can get out if the car flips upside down.

The XL1 is powered by an 800cc two-cylinder diesel engine with 47bhp and a 27bhp electric motor, delivering power to the rear wheels through a seven-speed dual-clutch gearbox. In electric-only mode the XL1 can travel around 30 miles on a single charge. When driven in diesel-only mode at normal motorway speeds VW claims it can average around 130-140mpg – or about 250 miles on one 10-litre tank full.

With a long, low and narrow design the XL1 claims a drag coefficient of just 0.189. That’s better than the Prius, which claims 0.25Cd. It’s achieved through having skinny tyres and e-mirrors mounted in the doors rather than traditional wing mirrors. These project virtual images on to screens in the cabin, so the driver can see behind them.

Inside the cabin, the driver and passenger sit next to each other, with one seat mounted slightly behind the other. The dash is simply laid-out and borrows from other models in the Volkswagen line-up. There is a 120-litre boot at the back, too.

There’s no word on price just yet but Auto Express was told it will almost certainly be sold as a lease car, rather than outright. Annual production is estimated to be between 50 and 5,000 models and the UK has provisionally requested 50 XL1s.