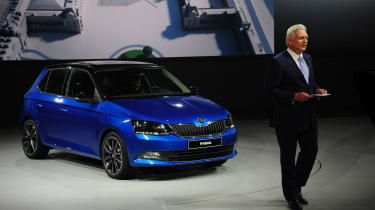 The Fabia is Skoda’s most popular model in the UK, and the new third-generation supermini is now on sale. You can read on for some details on the car, but the best way to find out about the car is by reading our full Skoda Fabia in-depth review.

We were given a preview of the car before it launched and spoke to senior exterior designer, Marko Jevtic about it.

“First of all, there is better packaging, the proportions are healthier,” said Jevtic. “The previous model was too tall and looked a little heavy over the rear wheels. The new model has a much better balance.”

With the third-generation model, Skoda was keen to revert back to the Fabia’s original, first-generation design, and added 90mm to the width of the car, while taking 30mm from its height. 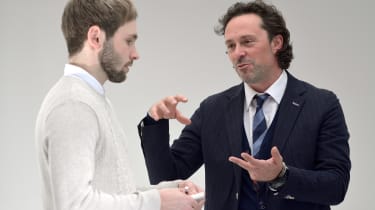 “It [the new model] has the qualities of the first Fabia,” added Jevtic. “We wanted its simplicity; we did not want to overload the design. The car is not fashion; people who buy it will want the car to look good in five years’ time, so we added a pinch of sharpness.”

One criticism often directed towards Skoda is that its models do not distance themselves enough from parent group Volkswagen. “We are trying to differentiate models,” said Jevtic, “but they are part of a family and every good family will have some common DNA, so we have common elements to the design.”

The engine range from the latest VW Polo has been adopted by the Fabia, too, with prices starting from £10,600.

Skoda hinted at its new styling direction with the Vision C concept at March’s Geneva Motor Show, and the Fabia has embraced many of those design cues, with its contoured bonnet and chrome-framed grille. They help portray a more upmarket look, while wide-set foglights are embedded low in the bumper for a broader stance.

A sharp waistline stretches from the angular headlights to the tail-lamps, to give a longer appearance. But this latest model hasn’t only been restricted to an injection of style, as the new Fabia also boasts inflated proportions. It’s 90mm wider and 30mm lower than the outgoing model, so it should be more stable and practical. It’s the same length as before, but a longer wheelbase will increase interior passenger space.

Boot capacity grows from 315 to 330 litres, and by folding the rear seats flat, buyers are able to free up a maximum luggage space of 1,195 litres – that’s 15 litres more than before. But for those wanting that little bit extra, Skoda will offer an estate version of the Fabia, too – we’re told that this will feature “class-leading space”.

The car debuted in the metal at the 2014 Paris Motor Show, and with a focus on efficiency, practicality and style, it will attempt to outgun the class-leading Ford Fiesta.

Skoda has revealed prices for the new Fabia hatch, which will start from £10,600. The range also offers a significant equipment upgrade over the last model.

The Elegance line-up offers the broadest array of engines, including a 1.4 TDI with 104bhp which isn’t available anywhere else in the line-up. That engine will cost you £16,840.

As well as all the standard kit, Skoda has introduced a Colour Concept system, which is aiming to offer buyers a new level of personalisation. The manufacturer says there are 15 different body colours to choose from as well as a number of different wheel, roof and wing mirror options.

The company has also turned to owner Volkswagen for help with the revised engine range, and the 59bhp and 74bhp 1.0-litre petrol three-cylinders from the VW Polo are offered in the Fabia for the first time. Higher-powered 89bhp and 109bhp 1.2-litre TSI engines are also borrowed from the Polo.

Fuel-sipping diesel options are the 89bhp or 103bhp 1.4-litre TDI engines – both of which will emit less than 90g/km of CO2.

A more efficient 74bhp GreenLine model using the 1.4 TDI is ont he way, too. This will be one of the cleanest superminis on sale, promising 91mpg economy and only 82g/km of CO2. Only Toyota’s 75g/km Yaris Hybrid can trump it. 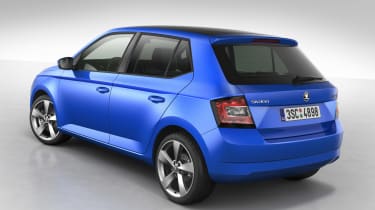 The development of the current model’s platform will be central to these big reductions in running costs. The new Fabia doesn’t ride on a shrunken version of the VW Group’s modular MQB architecture, but does feature a number of its components. This ensures the car weighs less than 1,000kg when fitted with the base 1.0-litre three-cylinder engine – a reduction of around 40kg.

Inside, more features are shared with the Polo. All cars get a revised dash with a touchscreen, while higher-spec models feature a 6.5-inch display with smartphone MirrorLink function, along with a reversing camera.

Tell us what you think of the new Skoda Fabia in the comments section below. Then check out the cars the Fabia has to beat in our best superminis round-up... 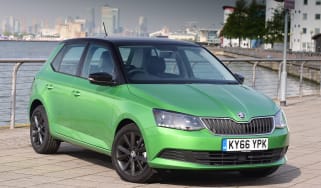