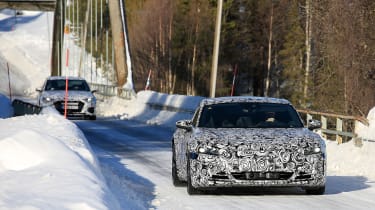 The production version of the Audi e-tron GT has been spied for the first time. The images show the all-electric Tesla Model S challenger undergoing winter testing before its official release later this year.

Though the current car wears a heavy disguise, the production version is expected to be near-identical to the concept first revealed at the 2018 Los Angeles Motor Show. From a styling point of view, only minor details will change: while the road car’s wheels will have five traditional bolts each as opposed to the concept’s centre locking system, the design is largely similar. Audi has previously confirmed that the concept’s 22-inch wheel diameter will be carried over, too.

Elsewhere, the concept’s glowing e-tron logos front and rear won’t make it onto the production car, and the touch sensitive door openers will be replaced by conventional handles for safety reasons.

Expect the e-tron GT to be similar in length and width to the A7 Sportback, but it should be roughly 1,370mm tall - a full 50mm lower than the A7 - despite the fact that it stores a battery on the floor of the platform.

The testing mule shows the retractable rear spoiler in its raised position, but this will drop to reduce drag - and therefore range - in certain situations. This will also work alongside sleeker underbody aerodynamics than its combustion cars; a benefit of not needing to route an exhaust system beneath the car.

Under the skin, the e-tron GT is closely related to the Porsche Taycan, with roughly 60 per cent of parts shared between the two. In the case of the Porsche, power from its twin-electric motor setup ranges from between 523 and 751bhp depending on model and with between 640 and 1050Nm of torque in overboost mode.

Sending drive to all four wheels, Audi expects the e-tron GT to accelerate from 0-62mph in around 3.5 seconds, while a special software system will allow it to achieve such figures repeatedly, even when the battery isn’t fully charged.

The 96kWh battery is capable of charging from flat to 80 per cent in just 15-20 minutes. One pedal driving is possible should the driver ramp up the rate of regenerative braking. 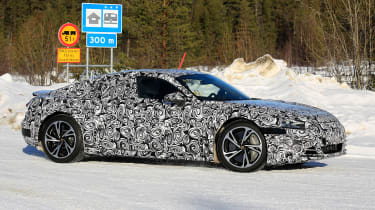 The electric drive has allowed Audi to control power via an advanced torque vectoring system. Despite a kerb weight in the region of two tonnes, the e-tron GT’s low centre of gravity (a result of not only the battery’s location but, in the case of the concept, the use of carbon for the car’s roof and aluminium for the doors) should ensure a handling balance that behaves every bit like the four-door supercar.

Speaking about the car at the 2018 LA Show, Marc Lichte, head of Audi design, was very excited to be involved with the e-tron. “It’s a dream to design a car like this.” says Lichte. “This is truly a design where the sketch becomes a reality.”

The electric design presents additional challenges, too. As Lichte explains, “ Other noises like road and wind noise become much more obvious without an engine. For example, we’ve designed the side mirrors to channel the air along the door skins instead of the window glass, so wind noise is less.”

Like the outside, much of the concept’s interior design is likely to be carried over to the production e-tron GT. That includes a centre span of the dashboard that flows into the doors to emphasise the cabin’s width. Whether the concept’s fully vegan material usage will be used is less likely.

Would you pick the Audi e-tron GT over a Porsche Taycan or Tesla Model S? Let us know your thoughts in the comments below... 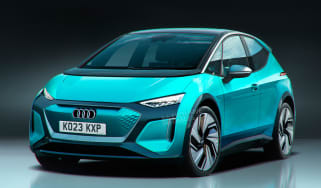 Audi ready to expand its e-tron portfolio with a new all-electric supermini model, which will sit on the VW Group’s MEB platform