Buying a pink car used to be a big no-no, but the demand for pink cars is growing 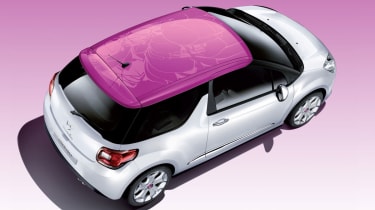 In the big book of car buying dos and don'ts, one mistake used to stand out above all others. It didn’t matter what badge was on the bootlid or what engine under the bonnet; but if you dared to drive home in a pink car, people would look on in horror and pity.

Even if you loved your new purchase, conventional wisdom said you’d never sell it on. Yet Auto Express has discovered that things have changed, and pink is becoming positively chic.

Seven to eight per cent of DS3s sold by Citroen now have the Fuchsia Pink roof option, while 11 per cent of Renault Twingo customers also choose Fuschia (where it’s available) and seven per cent of Peugeot 208 buyers opted for Rose Quartz metallic last year. Fuchsia Blush was introduced for the Kia Picanto in January, and this shade now accounts for 5.3 per cent of the colour mix. The proportion could be higher, but demand is outstripping supply.

Society of Motor Manufacturers and Traders (SMMT) records show that 9,914 cars in the UK now have the colour pink registered on their V5 – and a spike saw registrations nearly double last year from 2,035 in 2011 to 4,464.

This doesn’t tell the whole story, though, as many cars that have been sprayed pink or covered in PVC wraps will have their original colour on the V5.

John Symes, owner of specialist car custom business Symes in Bournemouth, Dorset, began spraying cars pink seven years ago. He tells us: “I was a MINI dealer, and every week someone would call wanting a pink MINI. I had a car that had been keyed, so I sprayed it pink and it sold within 24 hours.”

Now, John charges £3,000 to spray a MINI-sized model pink. He says his customers are all female, and he’s shipped pink cars as far afield as Cyprus and Japan. According to John, here “the colour is most sought after in Liverpool, Newcastle and Scotland, followed by London”.

The most popular cars to spray pink are the MINI and VW Beetle Cabriolet. John’s also sprayed a 500 in Razr Pink – a more vibrant shade than Fiat’s own Idol Pink, which makes up two per cent of the colour mix.

However, not every manufacturer is happy with the ‘pink’ label. Instead, some insist that their pink cars are ‘lilac’, or a ‘rosy’ hue – they clearly fear their models being branded ‘girls’ cars’. While women are happy to buy a masculine car, male buyers fear the wrath of their peers.

These days, however, plenty of women enjoy subverting the stereotype by making their cars even girlier. Just as some male drivers add macho graphics, girls are ‘pinking their rides’ with fairy, butterfly and Hello Kitty stick-ons.

Seven years ago Ruthie Collier-Large set up Me-Mo – an online store selling car kit for women. One of her latest stickers reads: “Caution! Away with the Fairies!” – and business is booming.

It’s clear that girl power is one reason you’ll see more pink cars around. Another is that brighter, bolder colours are becoming more popular across the entire automotive palette. The Hot Magenta Ford Fiesta (two per cent of the mix) is far from the brightest shade on the chart compared with Candy Blue (turquoise), Hot Mustard (acid yellow) and the more traditional Race Red.

A Fiat spokeswoman says: “We have a wide selection of colours available across the [500] range, including a light pink (Idol Pink) and a deep purple (Chillout Purple). While these types of colours may be for a niche audience, we do find that we have enthusiastic customers ordering them.”

Peter Cullum Kenyon develops bespoke colours for Bentley. Traditionally, he claims, people in the northern hemisphere go for muted tones – but things seem to be changing. “I don’t know if people are better off or just bored with the recession, but globally there is a resurgence in bright colours,” he explains.

Yet what about those crucial resale values? Tim Naylor, editor of British Car Auctions’ annual Used Car Market Report, says: “Pink remains a very scarce colour. However, when pink cars do get offered for sale, their scarcity can work in their favour.”

Philip Nothard, price expert CAP’s used car value specialist, agrees that cars finished in pink and other bright colours are not only holding their value, but outperforming ‘safe’ options.

CAP compares prices achieved at auctions against its benchmark. Over six months from February to July, 51 pink cars were sold at an average price of 97.5 per cent of the Cap benchmark. That compares to 96.5 per cent for black and silver cars (with 28,300 and 18,000 sold respectively).

When it comes to pink, Nothard says: “People bidding at auction for a number of cars to sell on wouldn’t go for pink; the buyers will have a customer already lined up, or they may be a private buyer looking for a pink model, so the cars perform well.”

So, if you’re an aspiring ‘pinky’, you can now buy without fear of ridicule. And if you fancy a brighter shade to cheer up the grey British weather, there’s likely to be even more choice in the near future.