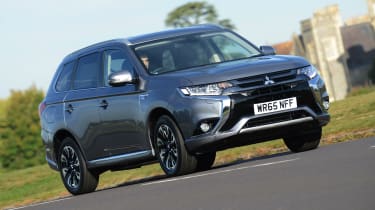 Security expert Ken Munro and his colleagues at Pent Test Partners security firm began investigating the Outlander PHEV after Munro noticed the mobile app used to communicate with the car had an unusual characteristic.

Most mobile apps use a GSN module to communicate between the car and the mobile phone, but the Outlander PHEV does without one. Instead, the Mitsubishi has a wireless access point on-board the car, which means it can be talked to directly.

Munro then realised the password to the Wi-Fi key can be easily cracked. He said: “The password is not long enough. The format is four lower cases, plus six numeric digits. That just isn’t enough.” On a relatively slow cracking rig, it took Munro and his team just four days to crack the password key. With top notch software the key can be accessed within a day.

Munro then looked if there was any more security between phone and the Wi-Fi access point other than the key. He said: “ We listened to look at the traffic going between the car and the device, and discovered a relatively simple binary protocol that was incredibly straightforward to understand and reverse engineer.”

This allowed Munro to communicate with the car directly, and gave him control of functions like lights and air-conditioning, and more worryingly, access to the charging and security status. Munro was able to turn off the car’s alarm and disconnect it from charging, showing how potential perps could break into the car and drive away with it.

A short-term fix exists, according to Munro. He advises to first unpair all mobile devices that have been connected with the car's access point. Then, using the app, he advises users to go to 'Settings' and select 'Cancel VIN registration', to effectively put the device to sleep. A long-term fix would require intervention from Mitsubishi.

Mitsubishi has since said it has taken the “matter seriously". It also pointed out that the hack affects the car's app and gives hackers limited access: “It should be noted that without the remote control device, the car cannot be started and driven away."

Are you worried about car hackers? Tell us in the comments below...