The 2017 Mitsubishi Outlander PHEV has improved economy and more kit, but is it still worth buying? 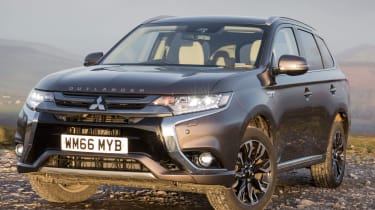 Small updates to the Outlander PHEV for 2017 do little to change our verdict on the hybrid SUV. It still remains a unique prospect in its class, and for many will prove practical and cheap to run. It’s still very appealing as a company car, but when the tax rules change in April the incentive for private buyers to go hybrid won’t be as great. Many similarly priced SUV rivals are better all-rounders, and could prove just as frugal if you can’t regularly plug in.

Mitsubishi’s UK market presence isn’t particularly big, but it does have one surprise hit on its hands. The Outlander PHEV launched in the UK back in 2014, and since then over 26,000 examples of the plug-in SUV have been shifted – considerably more than bosses initially expected to sell.

The Outlander range received a fairly heavy makeover at the end of 2015, with revised styling and improvements to the cabin. For the 2017 model year car we’re driving here, the updates are more minor.

From the outside, you’d have to be a serious Outlander enthusiast to spot the difference – front LED foglights and a new shark-fin antenna are the only real alterations to the exterior. Inside, there’s a revised centre console design to accommodate an electronic parking brake, some ambient lighting strips, plus extra kit on top-spec models including a heated steering wheel, 360-degree camera, rear cross-traffic alert and blind spot warning. Android Auto and Apple CarPlay connectivity has been added, too.

It’s certainly well equipped, and quality is decent enough, but the design isn’t particularly attractive or modern and the infotainment remains fiddly and old-fashioned. A Skoda Kodiaq or Kia Sorento is a far more up-to-date place to sit. 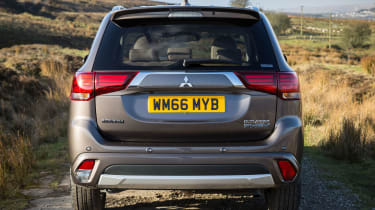 Nice though that extra kit is, it’s unlikely to sway any buyers who weren’t already tempted by the MY16 model. What’s more interesting are the small changes to the powertrain, resulting in improvements to refinement, claimed efficiency and the car’s electric range. Mitsubishi now claims a combined figure of 166mpg for the PHEV (up from 156mpg), while CO2 emissions drop from 44g/km to 41g/km. As before, whether or not you’ll get near these figures depends hugely on driving habits and your ability to regularly plug the car in – either at home or elsewhere.

The electric range is boosted slightly, with a real-world figure of about 25 miles - though you'll struggle to get near that with a heavy right foot. Mitsubishi has also added in an ‘EV-only’ function which keeps the car running on battery power alone as much as possible. Rapid charging times are also a bit better, too.

Regardless, it remains a powertrain that excels in town and on shorter commutes, but makes considerably less sense for longer journeys. It’s a little quieter than before, though, so when demanding all of the PHEV’s reasonable (but not plentiful) power reserve the petrol engine doesn’t become as thrashy as hybrids from Toyota and Lexus, for example.

On the road, despite claims of chassis revisions, the Outlander feels much the same as before. Don’t ask too much of it in dynamic terms and it’s perfectly acceptable for a family SUV, yet the extra weight of the batteries does harm its overall composure compared to a diesel Outlander. The steering is direct but body roll is pronounced, and while the soft suspension means a mostly comfortable ride, large bumps can thump and crash through the cabin. The quieter powertrain is also marred by lots of wind noise at motorway speeds. 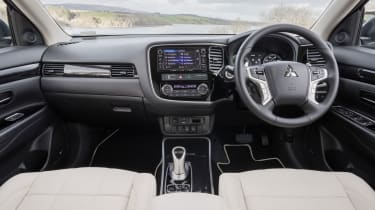 Our biggest problem with the plug-in Outlander isn’t with the car itself, but changes to the financial benefit of buying one privately in the UK. Previously, Mitsubishi’s aggressive pricing structure meant a PHEV could be had for the same price as an equivalent diesel. However, last year the Government’s plug-in car grant changed, meaning the list price subsidies for the Outlander have been halved to £2,500. It means the PHEV isn’t the bargain it once was – every variant is a few thousand pounds pricier than a diesel equivalent, while our top-spec test car is over £41,000.

This year sees changes to road tax bands, too, meaning those who buy a top-spec PHEV over the £40,000 list price barrier after April will go from paying zero tax to a flat £450 a year fee after the first year.

That brings the cheaper to buy diesel Outlander closer to the plug-in in terms of running costs, which for many buyers may make it the more economical choice. Nevertheless, the PHEV’s low Benefit in Kind (BiK) tax rate of 7 per cent remains unchanged, allowing company car users to save thousands of pounds a year compared to the oil-burner.