Mitsubishi’s Outlander PHEV is the best selling PHEV in the UK. We find out if the new model has the potential to continue this success 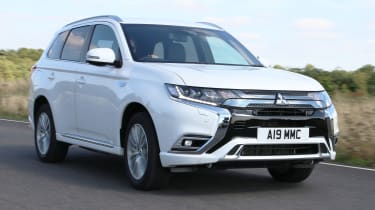 The revisions to the UK’s best-selling plug-in vehicle have not corrected many of its flaws – but equally, they’ve done nothing to dilute its appeal. The Outlander PHEV occupies an unusual niche in the marketplace, offering full-on family SUV practicality with low running costs and company car bills. So while more capable, plusher rivals are undoubtedly on the horizon, for now at least, there’s little to suggest that the Outlander PHEV’s sales success story is anywhere near its conclusion.

The Mitsubishi Outlander PHEV is the biggest selling plug-in vehicle in the UK; indeed, it’s held that title in Europe over the past three years. And while the onset of WLTP legislation and verification has held up the much-threatened onslaught of rivals for the electrified family SUV, it’s fair to say that the next year or so will see some serious competition come to light.

So here, right on cue (and, Mitsubishi is keen to point out, available for order now with delivery times of only a couple of weeks), is the updated 2019-model year Outlander PHEV. We were left more impressed by the Outlander PHEV’s numbers (and its value proposition) than its driving dynamics during an early drive abroad at the start of the summer. But now we’ve had a chance to put the package to the test on British roads.

The changes are significant. The new Outlander PHEV’s petrol engine expands from 2.0 to 2.4 litres, and can now run in two modes: Atkinson for greater efficiency, and Otto for more conventional performance and torque. It uses the electric motors to smooth over any jump when it's transitioning between the two.

The raw stats look promising enough. The larger 2.4-litre petrol engine now produces 133bhp compared with the 2.0’s 119bhp, and more torque (211Nm compared with 190Nm). The electric components have also been upgraded; the battery capacity rises by 15 per cent, to 13.8kWh, and the rear electric motor now produces 94bhp instead of 81bhp.

Significantly, Mitsubishi’s offering arrives just in time for perfectly synced certification on the WLTP economy test – designed, of course, to deliver more realistic official figures for regular cars, hybrids and EVs. The Outlander can travel up to 28 miles on electric power alone, and returns 139mpg and 46g/km of CO2 emissions.

There are chassis tweaks too. Changes in the welding process help to raise rigidity in the Outlander’s bodyshell, while revised shock absorbers are designed to improve ride quality. There’s a quicker steering rack, and the car gets larger front brake discs too – for what Mitsubishi claims is improved feel along with increased stopping power. 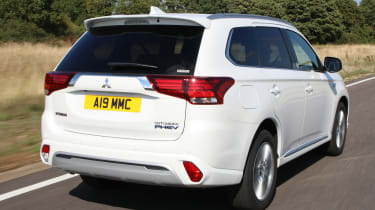 It will probably not surprise you to learn that the tweaks to the chassis do not transform the Outlander into a vehicle with any great degree of involvement, but the UK’s road surfaces do show that it now rides with a little more sophistication – marrying a fair ability to hang on in corners with compliancy over most potholes. It’s comfortable in almost all situations, in fact.

The difference in the steering is harder to gauge – but suffice it to say that it’s still accurate and light enough for town use, while also being low on communication.

Fact is, the Outlander PHEV is still much more comfortable as a cruiser than it is being hustled along. Try to get up to speed coming out of a 30mph zone, for example, and you’ll find the petrol engine quick to search for higher revs. Attempts to throw the car around on a B-road will ultimately expose it for the 1.9-tonne SUV that it is.

Stroke it along at a more modest pace, though, and you’ll find a pure-electric range of around 25 miles quite achievable – more than enough for the average daily commute. More than that, you’ll find the Outlander PHEV a pretty refined companion; there’s not much electric motor whine, and unless the petrol motor is provoked, it cuts in and out without fuss. 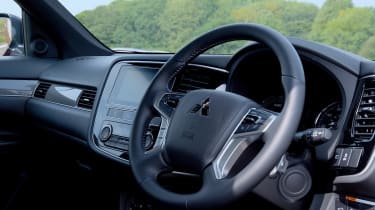 There’s also a Sport mode, which adjusts the power steering configuration, throttle response and Mitsubishi’s four-wheel drive system – but the limitations of the powertrain and the chassis get in the way long before you can really call it sporty. We doubt it’s a button that’ll get much use, frankly.

The Outlander PHEV’s trump card continues to be pricing. This is a capable five-seat SUV with 463 litres of boot space (it can even tow up to 1,500kg) and a complex electrified powertrain. But after the government grant is factored in, prices start from just £34,255. With a £5,000 deposit (and a generous Mitsubishi contribution), you’ll be left with monthly payments of around £440 for the entry-level Juro. The car continues to be strong on company car benefit-in-kind tax, too, with a rating of 13 per cent.

• What is the UK plug-in car grant?

There’s no arguing with the kit list, either. Basic versions get a heated windscreen and heated front seats, an electric pre-heater that can warm the car up via a smartphone app, an infotainment system including Apple CarPlay and Android Auto, a reversing camera, dual-zone climate control and cruise control.

Step up to 4h, the predicted best-seller in the UK, and you get leather upholstery with eight-way electric adjustment on the driver’s seat, a powered tailgate, LED headlights, a 360-degree camera feature and both blind-spot warning and rear cross-traffic alert.

The interior finish remains a notch behind other vehicles at this price point, however, with durable but tough plastics and cheap-looking switchgear still too prevalent. But the build quality itself feels solid and robust – and Mitsubishi backs it up with a five-year, 62,500-mile warranty that’s better than you’ll find on many premium SUVs.