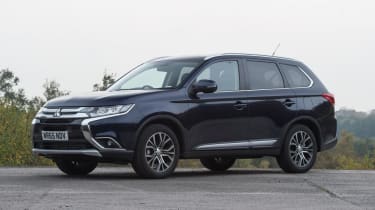 Mitsubishi made history with the launch of the Outlander PHEV, and it’s still a best-seller despite grants for this model being scrapped. While the plug-in hybrid grabs the headlines, don’t forget there’s also a diesel model. For many owners this makes more sense because it’s better suited to long motorway drives and towing. The right powertrain will reward you with good economy, but servicing costs are high and many parts are pricey, although using an independent garage could cut your bills. On this note, it’s apparent from reading owner forums that Mitsubishi dealers are either brilliant or terrible, with not much in between. So before you buy, if you’re going to keep things official, make sure your dealer is in the former camp.

Mitsubishi has a history of making tough, go-anywhere 4x4s. Its legendary Shogun was introduced 37 years ago, and since then the company has built a string of rugged pick-ups capable of taking on the iconic Toyota Hilux.

When it comes to producing road-biased SUVs, though, Mitsubishi has struggled. The first Outlander was launched in 2004, but failed to gain recognition in a segment full of talent. And it was the same story with the second-generation car, which was also sold as the Citroen C-Crosser and Peugeot 4007.

The third-generation Outlander of 2012 didn’t set the market alight at first. But, when a plug-in hybrid joined the range later, Mitsubishi had a huge hit on its hands. The Outlander is now a common sight in the UK, so how does it stack up as a used buy? 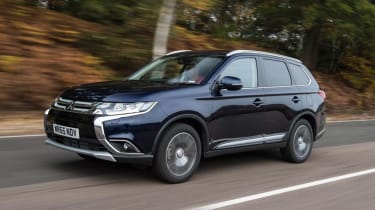 When the third-generation Outlander arrived, it came only with a 2.2-litre diesel engine but, within a year, the PHEV (plug-in hybrid) version was on sale. This was the world’s first SUV to have such technology, combining a 2.0-litre petrol engine and a 12kWh battery (upped to 13.8kWh in 2018). Trim choices were GX3h, GX4h and GX4hs, with GX5h added in October 2018.

In November 2016, the diesel model received a revised interior and suspension, and two months later the PHEV followed suit.

Finally, in August 2018, a 148bhp 2.0-litre petrol-engined version – available only with a continuously variable automatic transmission – joined the range.

All Outlanders are four-wheel drive and most have an automatic transmission. The diesel was the only version offered with a manual gearbox – and most have one – and it can make more sense if you do lots of long-distance runs. However, the hybrid is perfect for short, urban or stop-start trips. 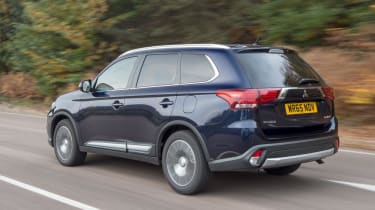 Alternatives to the Mitsubishi Outlander

Part of the reason the Outlander has been doing so well is that the PHEV doesn’t have any direct rivals. The Volvo XC90 and XC60 T8s are also plug-in hybrid SUVs, but they are more expensive, while the Kia Niro is smaller although, if it’s big enough for you, it’s certainly worth a look. If you’re not bothered about having a hybrid, you’ll have more choice. The Nissan X-Trail and Honda CR-V provide some stiff competition, while the Kia Sorento and Hyundai Santa Fe offer seven seats, a large cabin, strong reliability and lots of equipment.

All models above GX2 come with seven seats, although the space needed for the extra electrics in the PHEV make it a five-seater only.

On diesel Outlanders, engine oil can get into the clutch and flywheel. If this happens, both parts must be replaced – an expensive job.

Connectivity problems are common, with a lot of owners complaining about phones disconnecting mid-conversation.

The PHEV can return impressive economy if you charge it up regularly, but fail to do so and you may be less happy.

It’s a real mixed bag inside, with decent space for up to seven and a generally user-friendly dash. Plenty of seat and steering wheel adjustment make it easy to get comfortable. Boot space is good, too, with 1,608 litres (1,602 in the PHEV) available when the seats are folded. However, some of the materials look and feel cheap, the navigation is poor and PHEV models only have five seats. 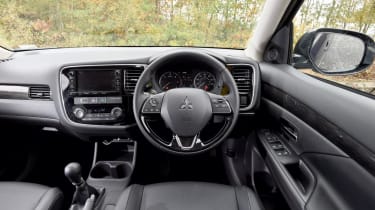 With diesel Outlanders, the service schedule runs minor, intermediate and major (these cost £335, £380 and £680, respectively), although you can purchase three-year/37,500-mile service plans for £525 on PHEV models and £700 on petrols and diesels. 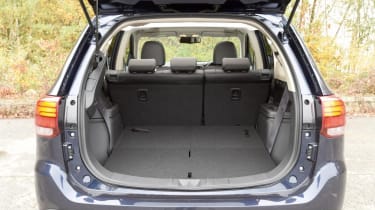 The Outlander Mk3 has been recalled 10 times. The first, in July 2013, was for early cars that could suffer adaptive cruise control glitches. Other recalls have been for transmission and brake problems, and (on PHEVs) fuel leaks and the engine not starting. They also covered door latch failures, handbrake corrosion, issues with driver assistance systems and overheating ECUs.

The Outlander didn’t make it into our Driver Power surveys in 2018, but there are plenty of owner reviews on the Carbuyer website. The regular Outlander scores four out of five stars, the PHEV 3.8. Owners of the PHEV like its economy (off the motorway), usability, electric-only range and reliability. While diesel owners love their cars even more, the cabin and Bluetooth are criticised.