The X-Trail sits in a crowded market, especially if five seats are enough for your needs. But even if you need space for seven, there are many accomplished choices and it doesn’t really stand out. Still, the Nissan isn’t a poor buy; it looks smart, is well equipped and has a roomy cabin, but there are alternatives that offer these things and feel more special to drive and more solidly built, and are just as affordable. So while we wouldn’t steer you away from an X-Trail at the right price, we’d urge you to look at a few rivals before taking the plunge.

Nissan has a long history of making rugged SUVs; its Patrol was introduced way back in 1951. Over the years the company has produced a raft of other 4x4s, including the original X-Trail, which arrived in the UK in 2000.

The first two generations of X-Trail were surprisingly capable off road, and offered reliable family transport at keen prices, even though the exterior design was uninspiring.

But with the Mk3, unveiled in 2013, Nissan brought the design right up to date. This sleeker and much more stylish SUV packed lots of hi-tech features. It also offered the option of seven seats, which is why there’s no second-generation Qashqai +2. So how does the X-Trail Mk3 stack up? 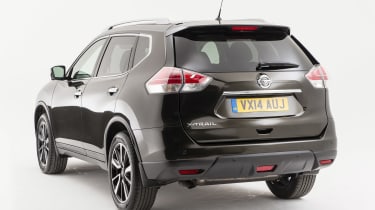 The third-generation X-Trail arrived in July 2014, codenamed T32; its predecessors were the T30 and T31. Only a 130bhp 1.6 dCi diesel engine was offered, with front or part-time four-wheel drive; the former was available with a six-speed manual or a CVT auto.

July 2017’s facelift brought a revised nose, better refinement and a higher-quality interior, plus LED rear lights, new wheel designs and DAB as standard across the range. There was also new standard and optional safety tech.

The 1.6 DIG-T feels sluggish while the 1.6 dCi is noisy and short on torque, leaving the 2.0 dCi as the best option, especially if towing, but prices are high.

Alternatives to the Nissan X-Trail Mk3

Two of the most talented seven-seat SUVs that compete with the X-Trail are the Hyundai Santa Fe and its Kia Sorento cousin. Both are bigger, come with long warranties, lots of kit and keen prices; they tend to be reliable, too. Another alternative is the Mitsubishi Outlander, which (unusually) is available in plug-in hybrid form or as a regular diesel. 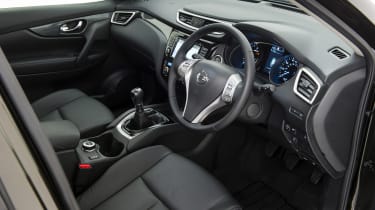 Noticeably more upmarket – and pricey – is the Volkswagen Tiguan. Older models come with five seats only, like the (more costly) Audi Q5 and BMW X3.

Vibrations can occur at motorway speeds, even if the wheels are perfectly balanced.

If the stop/start doesn’t work properly the car is probably overdue a service or needs a new battery.

When car is driven on rough surfaces, sunroof mechanism can squeak and rattle. Dealers can fix this.

Central locking solenoids can fail, leaving doors unable to lock or unlock, so check that all the door locks work.

Inside, the X-Trail is less utilitarian than previous models, and feels more upmarket, with a modern design and plenty of passenger space – even if the optional third row is only for children. It’s still worth having, but boot space rises from 445 to 550 litres if you go for the five-seater. Find a car with a glass roof if you can; it really brightens up the cabin. 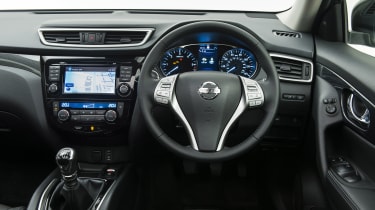 All engines are chain-driven so there are no cambelts to change, but fresh brake fluid is needed biennially, at £50. If you can find a car with the balance of a service plan, some maintenance will already have been paid for.

The X-Trail has been recalled just twice so far, the first time in July 2016 over possible oxygen sensor failure, leading to the car running badly. Models built between April 2015 and June 2016 were affected. X-Trails made up to the end of 2015 were recalled in August 2016 for possible corrosion in the tailgate’s gas struts. These could then fail so the tailgate wasn’t supported.

In this year’s Driver Power satisfaction survey, the X-Trail came 60th out of 75 cars. It didn’t score particularly highly in any category, with the engine and gearbox rated towards the bottom of the table, along with build quality and reliability. Owners rated the car’s infotainment and safety highest, along with its practicality.