Does Nissan’s gamble to replace the old X-Trail and Qashqai+2 with one car pay off? We drive new Nissan X-Trail dCi 130 n-tec to find out 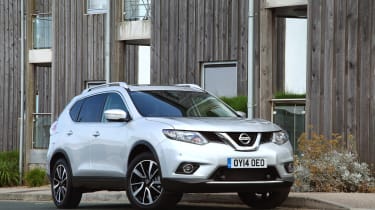 The Nissan X-Trail will move family and freight with more economically and comfortably than its predecessor, but its limited powertrain range leaves it exposed to the similarly-priced Honda CR-V and Hyundai Santa Fe, which offer similar driving experiences and brawnier 2.2-litre diesel engines.

The Qashqai+2 is dead. Long live the Nissan X-Trail. It's Nissan’s bold move to, in one fell swoop, streamline the fine new Qashqai into a one-bodystyle range, and boost the new X-Trail’s profile (and sales) by making it the only seven-seat crossover in Nissan’s range.

That’s the version we’re driving here in the UK for the first time, with out test car having the requisite £700 option box ticked to score two folding seats in the boot. Fifty per cent of UK buyers are expected to cough up for the seven-seater.

Opting for seven seats reduces the boot capacity from 550 litres to 425, but the upshot is the extra seats are stowable with one hand and are perfectly spacious enough for children, or adults up to six feet. It’s a lack of floor space rather than cramped headroom (despite the raised theatre-style tiered seating) that’s the limiting factor. But the X-Trail’s rear quarters are practical in other respects, with a standard-fit spare wheel under the boot floor and a remote-open tailgate on n-tec and Tekna models.

Assuming you’ve arrived in the X-Trail for its seven seats, what else are you in for? If you’re perturbed at missing out on the latest Qashqai, don’t worry, as the larger X-Trail feels remarkably similar from behind the wheel. 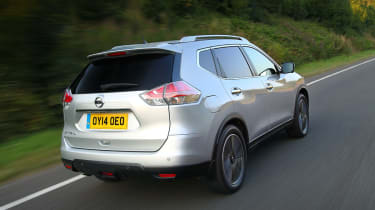 Nissan is employing a similar cabin design policy to Ford and Mercedes, where large chunks of its model range use all but identical dashboard design, switchgear and equipment. Not only does that make the four-model families easier to decipher, but the car itself is familiar to operate, with the same seven-inch NissanConnect touchscreen interface, factory-fit climate control, and a five-inch screen between the instrument dials. This display cycles between 12 different readouts – switch to navigation directions for a tricky roundabout, then back to Bluetooth media info or the drowsiness sensor, for example.

The combination of user-friendly tech and a somewhat plain but sensible layout makes operating the X-Trail a largely stress-free experience – just the job for those upsizing from smaller hatchbacks and crossovers, as Nissan predicts close to half of buyers will do.

Turning the X-Trail from rugged 4x4 to car-like crossover for its third iteration is a crowd-pleasing decision that’s undeniably sensible if not at all beguiling, but Nissan’s decision to only offer the car with one decidedly downsized engine is a little more troubling. Even with just the driver on board, the 1.6-litre diesel’s 128bhp and narrow 320Nm torque band only feels ‘adequate’ rather than punchy. 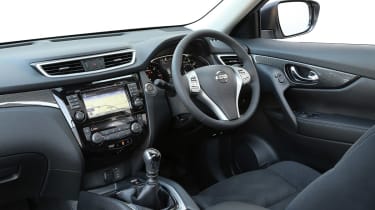 Load the car with the people and the luggage it’s clearly capable of swallowing and the X-Trail will feel breathless, while revving out the little diesel quickly destroys the strong NVH (Noise, Vibration and Harshness) levels for very little benefit in forward momentum. Nissan has quietly confirmed there’ll be a turbocharged 1.6-litre petrol option in 2015, but its 187bhp and 240Nm are unlikely to sole the problem, no matter how hard you row the clattery six-speed manual gearbox. A CVT automatic marketed as ‘Xtronic’ is a £1350 option across the range.

When Nissan rebooted the Qashqai for 2014, it did away with a good deal of the predecessor car’s unlikely handling brio for a much more refined (but less chuckable) character. Predictably, that’s the mood the new X-Trail has assumed too. Steering and pedal weights are light, and the ride is compliant enough on all but the roughest urban roads (thanks in part to chunky tyre sidewalls even on the top-spec 19-inch alloys). But there’s nothing here for the enthusiastic driver to savour, pointing those looking for an engaging school run firmly towards the (five-seat only) Ford Kuga or Skoda Yeti.