The Ford Kuga is competent and good looking, but doesn’t feel as up-to-date as newer SUV rivals 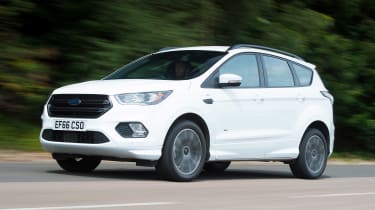 Ford's second-generation Kuga was facelifted in 2017, but other than the refreshed looks not much has changed under the skin. It's decent enough to drive, but not the most engaging in its class, while there's plenty of kit and the diesel engine is capable.

Going against the current trend, the Ford Kuga is more SUV than crossover. This is demonstrated by a range that offers a lot of four-wheel-drive choices, meaning it's more useful in the rough stuff than some.

Smart styling, that spacious interior and plenty of standard equipment count in its favour, although the Kuga’s infotainment system isn’t the easiest to operate, and the dash looks and feels quite low-rent. The new looks mean it's more distinctive and handsome, but overall the Kuga is starting to feel old when compared to newer arrivals such as the SEAT Ateca and Peugeot 3008.

In the US, Ford is famous for its SUVs and pickup trucks. But, it only hit the compact SUV sector in the UK in 2008, when the Kuga arrived. The Kuga Mk2 was launched in 2012, while a facelift in early 2017 added the latest Ford tech to keep the Kuga competitive against a growing number of rivals. A third-generation Kuga has now been introduced, featuring mild and plug-in hybrid technology.

It's a popular model among buyers, especially because Ford offers decent discounts on the car, while the extensive dealer network persuades people to buy out of convenience more than anything else. Thankfully, the Kuga is a practical machine that carries much of the DNA of the Focus within it. What's more, while the Kuga can be classed as a crossover, four-wheel drive is available on more models in the range than on most rivals, so it has a more rugged appeal than its competitors.

The Kuga line-up mirrors that of the Focus, and comprises Zetec, Titanium, ST-Line and Vignale trims. Standard equipment across all models is generous, with the entry-level Zetec offering 17-inch alloy wheels, a DAB radio, air-conditioning, cruise control and Ford's Sync3 system which includes sat-nav with Android Auto and Apple CarPlay connectivity. ST-Line models get a sportier look than standard, with bigger wheels and less chrome trim.

The ST-Line X model bundles extra kit together into an affordable package, especially if you're buying a Kuga on finance. At the top of the range, the luxurious Kuga Vignale has everything you could wish for, including special styling tweaks, 19-inch alloys, a 10-way adjustable electric driver’s seat, leather upholstery and leather-topped dashboard. Pre-collision assist with autonomous emergency braking is now standard across the range, as is lane-keeping aid with lane-departure warning. 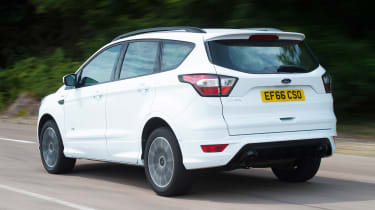 With the third generation of the Kuga, Ford has realigned the engine line-up to include mild and plug-in hybrid technology. In terms of diesel power, there is a 1.5-litre EcoBlue unit with 120PS and a more powerful 2.0-litre EcoBlue delivering 190PS. This larger capacity diesel engine is now offered with mild hybrid tech and produces 150PS.

Petrol versions of the Kuga include the 1.5-litre EcoBoost in 120PS and 150PS guises and a new 2.5-litre Duratec plug-in hybrid with 225PS. The lower-powered EcoBoost variant is only offered in combination with entry-level Zetec trim, while the 150PS engine can be found throughout the range. Both petrol models only come with a six-speed manual gearbox, whereas the plug-in hybrid features a CVT auto transmission.

There are plenty of rivals to the Kuga, as prices run from around £24,000 to £38,000. The most direct rivals in concept are the Mazda CX-5, Honda CR-V, Toyota RAV4 and Volkswagen Tiguan. But there are plenty of other options, including the SEAT Ateca and Skoda Karoq, the Peugeot 3008, the Kia Sportage and Hyundai Tucson, the Renault Kadjar and Nissan Qashqai, among many others.

For an alternative review of the latest Ford Kuga SUV visit our sister site carbuyer.co.uk

Show me:
Ford Kuga vs Toyota RAV4 vs Skoda Karoq 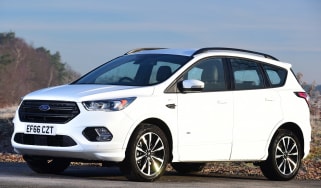 The new Ford Kuga will start from £23,995, and has arrived on the UK market with three hybrid versions - including a plug-in - in its range
Ford Kuga Titanium 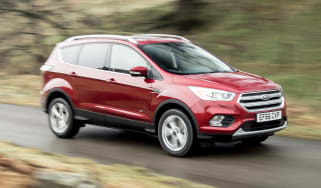 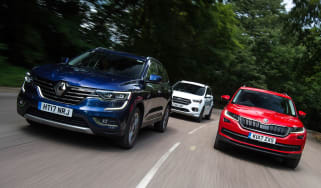 The Koleos name is back on all-new full-sized Renault SUV, but how does it compare to the Skoda Kodiaq and Ford Kuga?
Ford Kuga vs Volkswagen Tiguan vs Mazda CX-5 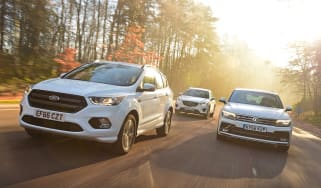 Ford hopes to muscle in on the compact SUV class with its facelifted Kuga. How does it fare against VW Tiguan and Mazda CX-5?
New Ford Kuga 2017 review 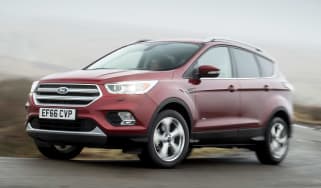 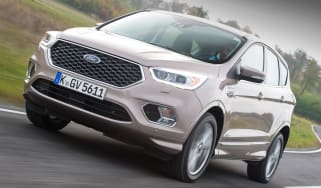 The Ford Kuga Vignale is the glamorous range-topper in the SUV's range, but it's just too expensive to recommend
New 2017 Ford Kuga facelift: Full pricing and specs revealed 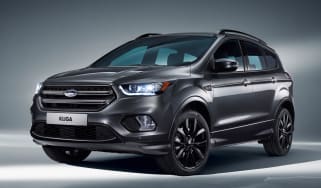 Ford's updated Kuga SUV will go on sale before the end of the year, priced from £20,845
New Ford Kuga Vignale revealed in production form 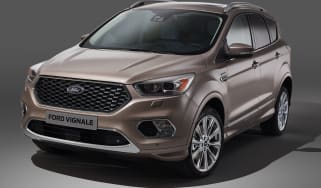 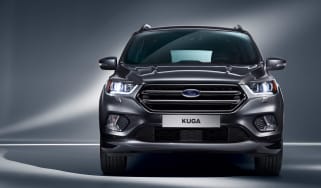 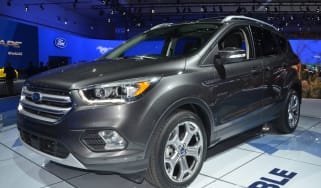 The Ford Escape is the sister car to the European Kuga, and a facelift may preview changes for the Kuga
Honda CR-V vs Mazda CX-5 & Ford Kuga 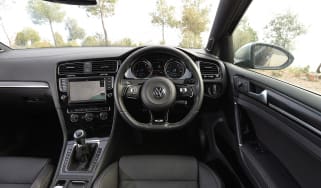 Has a facelift breathed life into the Honda CR-V? We find out as it meets the Mazda CX-5 and Ford Kuga
Ford Kuga Titanium X Sport review 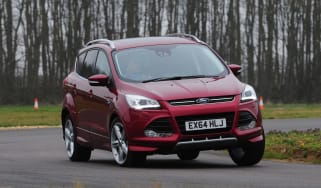 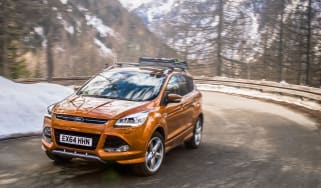 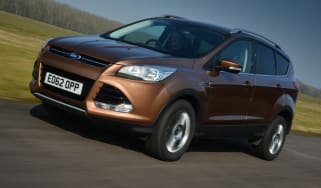 The Kuga Titanium X offers a huge haul of equipment and luxuries in the mid-size SUV sector but is it worth the price bump?
Ford Kuga Titanium X Sport hits the showrooms 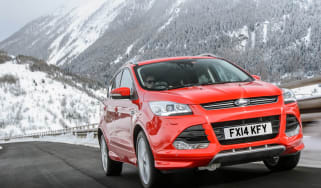 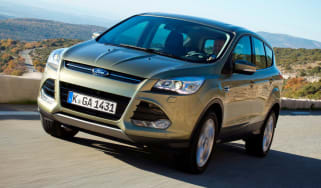 Rightly or wrongly, safety has always been part of the appeal of owning a 4x4.
Ford Kuga 2.0 TDCi 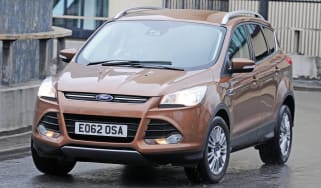 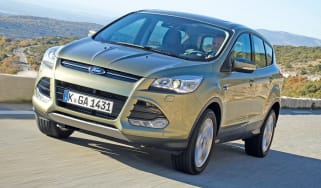 We’ve already tried the diesel version of the all-new Ford Kuga, so how does the petrol model compare?
Ford Kuga (2008-2012) review 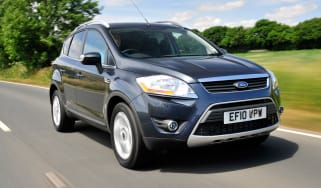 Smart-looking Ford Kuga 4x4 drives as well as it looks, but it could be more practical
Skip to HeaderSkip to Content