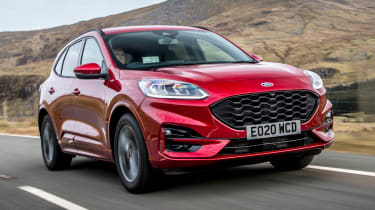 The Ford Kuga PHEV is at its best when running around in its pure-EV mode. The engine is a little intrusive when it kicks in, and the CVT gearbox doesn’t do the driving experience any favours. Thankfully, the Kuga has a usable electric range, plus enough space for all the family. ST-Line brings plenty of kit, and if you’re planning to buy on finance or as a company car, this PHEV version could work out cheaper per month than an equivalent diesel model.

We’ve already driven the new Ford Kuga, and been impressed by its handling, interior and strong kit list. The mild-hybrid diesel model did a lot well, but while that car is likely to be the top-seller, this plug-in hybrid will appeal to company car buyers looking to cut their tax bills.

We’ll start by looking at the costs. There’s no ignoring the fact that low CO2 emissions result in affordable Benefit in Kind (BiK) tax. This Kuga is no exception, with its 10 per cent banding rising by just one percentage point each year for the next three years.

By contrast, the 118bhp 1.5 EcoBlue diesel automatic emits 145g/km of CO2, so you’re looking at a lofty 36 per cent banding – just one percentage point off the most polluting models. In this way the Kuga PHEV makes a strong case for itself.

Yet this pales into insignificance if you aren’t able to use the Kuga PHEV as Ford intended. Despite its generous 35-mile electric-only range (28-30 miles is more realistic), you’ll still need regular access to a plug in order to realise its full potential. 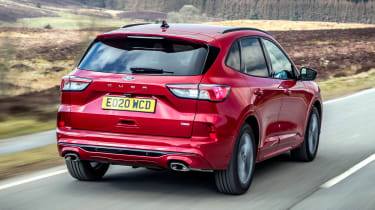 Rely too heavily on the petrol engine and you’ll quickly realise that lugging around a big battery without being able to use it hits fuel efficiency hard. It’ll be worse still if you flick the Kuga into its ‘EV Charge’ setting. Here it uses the engine to top up the cells; we’d avoid this unless you’re due to enter a built-up area or low-emission zone.

If you’re regularly driving long distances or live somewhere without access to off-street parking, then one of the cheaper diesel or petrol models is likely to be a more cost-effective consideration. Charging the PHEV on a daily basis will show the car in its best light; there’s no quick-charge capability – instead, the fastest you’ll be able to recharge from empty is in 3.5 hours using a 7.4kW home wallbox. A standard three-pin plug should do the same job in around six hours. Beware, if you want to use a public charge point, you’ll need to specify the relevant cable from Ford – at a cost of £195.

But what’s the Kuga PHEV like to drive if you meet the criteria? Well, the good news is that it keeps many of the diesel’s favourable handling traits; body control is tight, the steering is sharp and the ride is compliant. 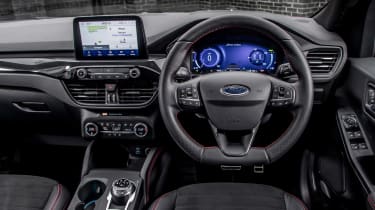 The complications arrive when you delve into the car’s many drive modes. Not only are there the usual Normal, Eco and Sport settings, there’s also a Slippery Deep Snow/Sand mode. And yet this Kuga is offered only with front-wheel drive. On top of that there are four settings for the electric drivetrain; the aforementioned ‘EV Charge’ tops up the battery using the engine, while ‘EV Now’ prioritises any remaining electric energy. ‘EV Later’ holds the state of charge, and ‘EV Auto’ uses the car’s electronics to determine the most efficient combination of petrol and electric power delivery.

With a full battery, the Kuga will move off in near-silence. The hybrid powertrain, with the Kuga’s raised driving position and good visibility, makes it very easy to drive in town.

Here the Kuga PHEV is at its best. You’d never call it quick, but power is instant and it’s smooth in its delivery. You can boost the level of brake regeneration by clicking the ‘L’ button on the gear selector; it doesn’t allow one-pedal driving, but it helps to make urban treks as efficient as possible. As long as you’ve enough charge, the Kuga will run at up to 85mph without waking the engine.

The issues come when you ask for a bit more shove, or when the charge is depleted. The engine drones away in the background as it tries to feed the battery, and you find the usual issues with CVT gearboxes. Hard acceleration causes the revs to soar and the engine to groan; we’d prefer a conventional auto ’box like the one in the Hyundai Ioniq. 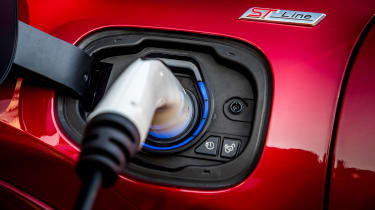 Elsewhere, much of what we said of the diesel rings true with the plug-in. The interior is built to a high standard, and on ST-Line and above, you get great digital instruments. The rotary gear selector isn’t the most tactile, but it makes space on the centre console.

ST-Line is likely to be a popular choice – not only for that dash, but also for its sportier styling, 18-inch alloys and black roof rails. That’s on top of the Titanium’s LED lights, climate control and B&O stereo, at £2,100 extra – or about £25/month more (on a £393/month bill) on a three-year PCP deal.

That’s particularly competitive when you compare costs with those of a similar ST-Line diesel auto (£407/month) – although the PHEV has a much larger balloon payment at the end of the agreement.

The Vauxhall Grandland X Hybrid is about £600 a month in mid-spec SRi Nav trim, even with Vauxhall’s £2,000 deposit contribution.