The Hyundai Ioniq comes in three flavours, and is a more conventional-looking – and cheaper – proposition than the Toyota Prius

Hyundai’s first attempt at a full-on eco car family is a strong one. The Ioniq comes in hybrid, plug-in and full electric forms, and all three offer plenty of practicality at an affordable price with lots of kit. However, the electric motor and petrol engine in the hybrid variants aren’t integrated as well as in the Toyota Prius, and the car isn’t as comfortable, either.

Still, if efficiency on a budget is your main aim, the Ioniq is a great alternative to the Prius. On top of that, the amount of standard equipment is very generous, while the cabin is more conventional and easier to get along with day-to-day. 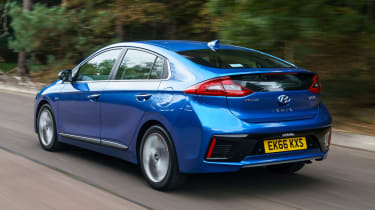 Over the years, Hyundai has transformed itself from a budget brand that offered no-frills cars to a company that fills niches across the board. From the i30 N hot hatchback and i10 city car to the full-size Santa Fe SUV, there's a Hyundai model for sale in most sectors – including an eco-friendly machine in the shape of this, the Ioniq.

The Ioniq is Hyundai's answer to both the Toyota Prius and Nissan Leaf, because it's offered in hybrid, plug-in and full EV configurations. What's most impressive is that those rivals from Japan have had a few years' head start over the Ioniq in terms of development, yet the Ioniq is a strong contender against both.

The standard hybrid model was the first Ioniq to arrive, and it features a 1.6-litre petrol engine (confusingly badged GDi, which is short for Gasoline Direct Injection), electric motor and battery pack that gets power to the road via a six-speed twin-clutch DCT gearbox. This should be a sportier option than the CVT-equipped Prius, but in reality the Ioniq is designed for comfort over speed, and is relaxing to drive.

The Ioniq plug-in features the same engine and electric motor, but it gets an 8.9kWh battery. This is bigger than the battery in the Prius Plug-In, and helps Hyundai to claim a range of 39 miles for the plug-in model on electric power alone.

Finally, the Ioniq EV features an improved 100kW electric motor and a 38.3kWh battery to give a claimed maximum range of 193 miles. 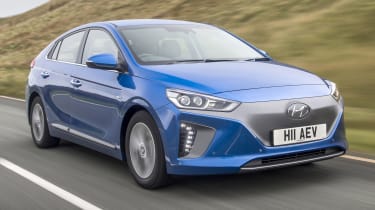 From the outside, the three Ioniqs share the same shape, but the there are subtle differences between them. The big giveaway to the EV version is its blank grille insert up front, but the hybrid versions are largely indistinguishable from each other. Like other Hyundai models, the Ioniq is offered in Premium and Premium SE, while the standard hybrid is also available in SE Connect guise, which gives the range a starting price of around £23,800 – the Premium model is around £2,000 extra. There's a price jump of around £4,500 to the plug-in variant, while the EV is around £7,000 extra, although you can claw some of that back with the £4,500 Plug-in Car Grant.

The main rivals for the Ioniq hybrid are the aforementioned Prius, while the Kia Niro uses the same running gear as the Ioniq, but cloaks it in an SUV-style body. All three of these cars are also offered in plug-in hybrid guise, while the Mitsubishi Outlander PHEV, MINI Countryman PHEV and VW Golf GTD are other plug-ins that it goes against.

As for the EV version, the main rival is the Nissan Leaf, although the latest Leaf Mk2 has a greater battery range and improved performance, while the VW e-Golf, BMW i3 and Renault Zoe all offer zero-emissions electric driving at different price points. 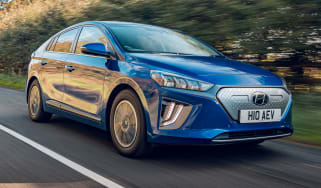 The Toyota Prius is the world's most popular hybrid - can the refreshed Hyundai Ioniq prove to be a worthy rival?
New Hyundai Ioniq Hybrid 2019 review 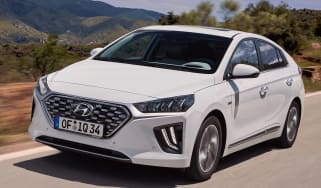 Have a series of updates lifted the Hyundai Ioniq above the Toyota Prius in the battle for hybrid supremacy?
New facelifted Hyundai Ioniq range uncovered 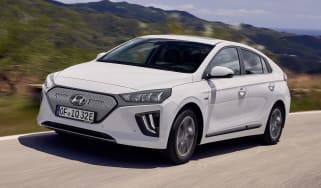 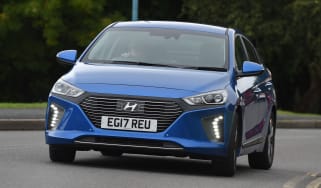 The Ioniq is available as a conventional hybrid, a plug-in hybrid and an all out electric vehicle. But the plug-in is the best all-rounder
Long-term test review: Hyundai Ioniq Plug-in Hybrid 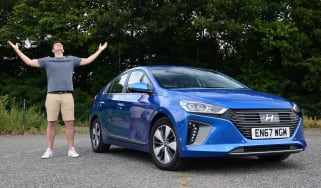 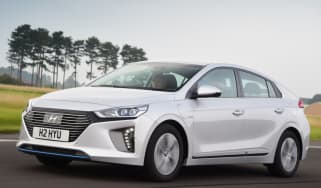 The Ioniq is Hyundai's first hybrid, and it's a solid first effort from the Korean maker
Hyundai Ioniq Plug-in vs Toyota Prius PHV 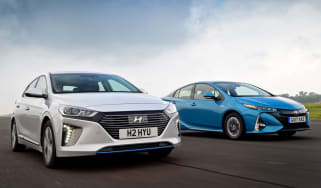 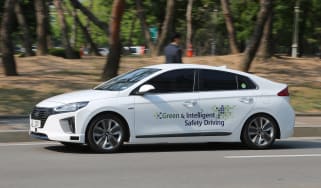 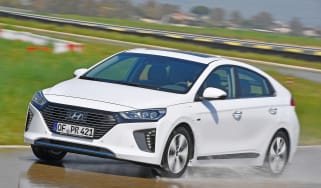 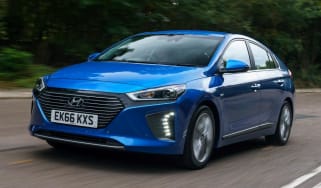 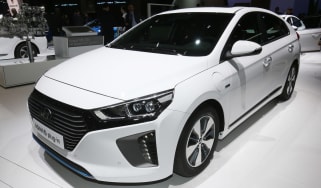 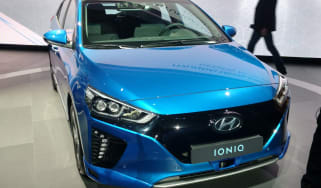 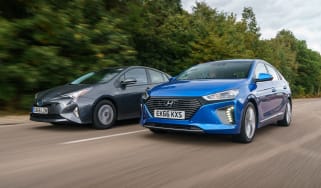 Hyundai has entered the hybrid market with its new Ioniq, but does it have what it takes to topple Toyota’s Prius?
Hyundai Ioniq EV electric car 2016 review 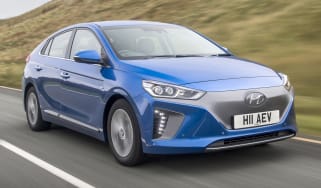 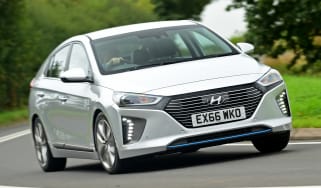 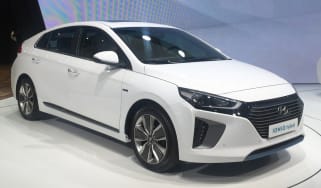 Hyundai reveals its Toyota Prius rival will start from £19,995, and go on sale in October
Skip to HeaderSkip to Content