Have a series of updates lifted the Hyundai Ioniq above the Toyota Prius in the battle for hybrid supremacy? 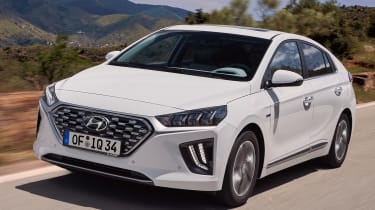 Incremental improvements make the Hyundai Ioniq a more convincing proposition than before, but whether it does enough to topple the all-conquering Toyota Prius remains to be seen. It’s not as sharp to drive, nor is it as comfortable, but the interior feels better laid out and the infotainment set-up is streaks ahead. We’ll deliver our definitive verdict when we bring the two together in the UK in the coming months.

The Hyundai Ioniq has lived in the shadow of the pioneering Toyota Prius ever since it launched in 2016. But the Korean maker thinks a series of mid-life updates – focused largely on technology and infotainment – will help its hybrid hopeful rise to the top.

It still comes in three different flavours: Hybrid, Plug-in Hybrid and Electric. Historically, the EV accounted for only five per cent of UK cars, while the Plug-in catered for an additional 15 per cent. The conventional hybrid we’re driving here has always been the big seller, and should continue to take the lion’s share of sales going forward.

Save a few external tweaks, the new Ioniq looks much like the car it replaces. The Hybrid gets a new ‘cascading’ grille with active air slips, which open and close to improve efficiency. There are new lights front and rear and new alloy wheel designs, too. 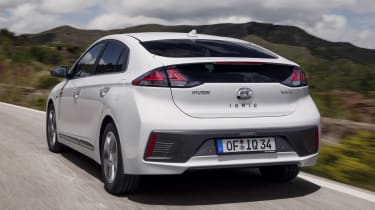 Inside, the changes are easier to spot. The dashboard has been completely redesigned with a new 10.25-inch infotainment system and a seven-inch digital instrument cluster. Bizarrely, while some manufacturers are ditching screen-operated climate controls for easier to use buttons, Hyundai has done the opposite and switched its intuitive scroll wheels for a much more fiddly touch-sensitive display.

Quality is good in the most part, but there are still some scratchy plastics around the cabin. It’s disappointing Hyundai didn’t deem it worthwhile to spruce up the panel that runs behind the steering wheel and below the central screen, especially as your fingernails brush against it every time you switch the car on.

Another big issue with the interior of our test car, were the borderline-dangerous reflections emanating from the light-coloured dashboard. Not only do they project on to the windscreen, they also obscured the view out the side mirrors. If we were specifying a new Ioniq, we’d sway toward the darker trims. 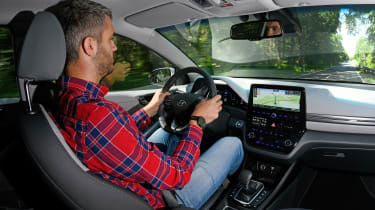 That aforementioned touchscreen is filled with technology, however, and is intuitive enough to operate. It’s light years ahead of Toyota’s set-up, and can be customised to display the information you use most often; myriad widgets (sat-nav, climate, audio, phone connectivity, etc) can be stacked on the home screen exactly as the driver desires.

The system is all online, too. Using a built-in SIM card, the Ioniq can offer live traffic, parking and fuel station information, as well as – in the case of the Plug-in and Electric versions – real-time charge point availability. The BlueLink smartphone app offers new functionality for all three models, including the ability to set the air-conditioning remotely, or send a sat-nav destination straight to your car. Again, Plug-in and Electric owners get added features, including battery information and state of charge.

While the Ioniq Electric gets a bigger 38.3kWh battery (for a 182-mile WLTP range), the hybrid models are unchanged. That means the same combined 139bhp and 265Nm of torque. The Plug-in car will do 32 miles on electric power, thanks to an 8.9kWh battery.

However, unlike many electrified family cars, the Ioniq feels a little lethargic. The car starts in ‘Eco’ mode by default, restricting power to conserve energy. To suggest it wouldn’t pull the skin off a rice pudding might be a step too far, but it’s not going to win any traffic light drag races. Even in Sport (selected by pushing the gear lever to the left) it struggles to pick up pace with any sense of urgency.

Yet the Ioniq is at its best in town, where even the standard Hybrid will pootle between junctions without waking the engine. And when it does kick into life, it’s about as unobtrusive as any hybrid currently on sale. 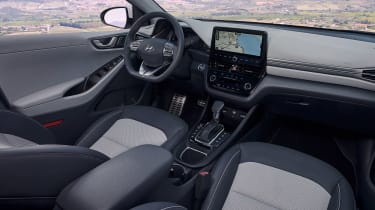 The DCT gearbox isn’t perfect, but it slurs changes as gently as you’d hope possible in a car like this. The steering wheel paddles double as controls for the regenerative braking system, too; flicking the left paddle increases the system’s strength, slowing the car to a crawl in its most aggressive setting. It’s incredibly intuitive to use, if not quite as effective as the Nissan Leaf’s e-Pedal.

The ride, like before, doesn’t feel as well damped as it does in the Toyota, but it’s far from uncomfortable. Refinement is acceptable, with driver and passenger sufficiently insulated from any kind of wind or road noise. The seats are a little flat, however, not offering the support of more conventional family cars like the Volkswagen Golf or Vauxhall Astra.

Exact prices and specs will be announced closer to the car’s on sale date towards the end of September, but Hyundai UK is expecting a premium of between £800 and £1,500 over the outgoing car will be justified by a longer list of standard kit.