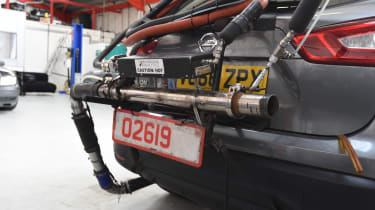 All new cars sold from that date have to be assessed under WLTP, and the tests involved are longer and tougher than those contained within the previous NEDC (New European Driving Cycle) assessments that it replaced. WLTP is designed to give motorists a clearer idea of how much fuel their cars will use, and the volume of pollutants emitted during driving.

While the actual amount of fuel cars burn (and the volume of pollutants they emit) when driven on the road by motorists hasn’t changed, the new criteria mean that during official efficiency assessments, higher readings are recorded. 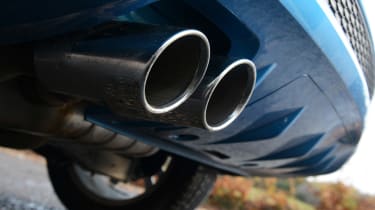 This has led to worse on-paper fuel economy figures for almost every new car on sale in the UK, and higher recorded CO2 emissions, too. Experts estimate measured CO2 emissions have risen between 13 and 22 per cent under WLTP tests when compared to NEDC assessments, for example.

Car manufacturers are also facing supply issues with some of their vehicles, as every model a brand produces has to be assessed against WLTP criteria. Recently a number of companies admitted supply issues with plug-in hybrid vehicles (PHEVs), as the priority has been to get big-selling petrol and diesel models through the new certification process. A number of buyers have reported delivery delays for their new cars, too, regardless of fuel type.

Furthermore, some test centres across Europe are understood to be suffering bottlenecks caused both by the volume of cars that require retesting, and the fact the WLTP procedure takes longer to conduct than the NEDC tests did. There is also concern the UK’s Vehicle Certification agency (VCA) may lose its certification powers after Brexit, causing further assessment headaches.

Because both the first year of road tax (VED) and company car tax are based on a car’s CO2 emissions, the amount of tax that consumers pay on their cars will change based on the new WLTP assessments.

However, to avoid consumers facing a significant tax hike as a result of increased emission measurements, WLTP figures are being converted back to NEDC figures until April 2020. These figures will then be published on cars’ window stickers and official documentation, and used for the purposes of tax calculations.

The EU has developed a computer programme, known as CO2MPAS, to replicate NEDC figures from WLTP tests. But there is still the option to retest under old NEDC conditions if the manufacturer disputes the CO2MPAS calculation.

From April 2020, figures will cease to be converted to NEDC equivalent, and WLTP measurements will be used for tax calculations.

The new WLTP tests represent a root and branch change compared to the NEDC assessments they replaced. While they are still laboratory-based, the cars are ‘driven’ for longer distances, at higher speeds, and more variables taken into account.

Individual cars with different alloy wheel sizes and trim levels, for example, must be assessed individually under WLTP, as larger alloy wheels negatively impact economy and emissions. It's the same story for the extra weight added equipment on higher trim levels; options such as roof racks, which affect aerodynamics, are also taken into consideration. Other changes include faster acceleration and sharper braking, while cars are put through different levels of assessment depending on their power-to-weight ratios.

Plug-in hybrids, or PHEVs, which can drive on all-electric power for 20-30 miles and be recharged from a plug, are tested in a different manner from conventional petrol and diesel cars when being assessed under WLTP.

One test is started with the PHEV’s battery fully charged, and the car is put through repeated WLTP cycles until the battery is fully depleted. A second test then takes place, which begins with the PHEV’s battery being totally empty, the car being powered solely by its internal combustion engine (along with any energy generated from regenerative braking). A PHEV’s CO2 emissions are calculated based on the average of these two tests.

Electric cars are also assessed more stringently under WLTP than they were under NEDC. They start with a full battery, and are subjected to the same fuel economy cycle petrol and diesel cars undertake. Once the cycle is complete their batteries are recharged, and a meter measures how much electricity has been used during the trial. The EV’s range is calculated based on how far and how fast it has travelled during the test.

Where do real-world RDE tests come into it? 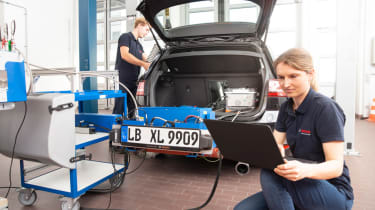 RDE tests have to be carried out and logged by manufacturers, but only the particulate matter element has to be passed at present. From September 2019 the NOx emission element will also have to be passed.

Even so, to reflect how tough RDE tests are, car makers are allowed a ‘conformity factor’ of 2.1, meaning their cars can emit 2.1 times more NOx during the on-road RDE portion of the test than the limits set.

Yes. Euro 6 standards arrived in 2014-15, setting a limit of 80 milligrams per kilometre (mg/km) for NOx for diesel cars (60mg/km for petrols) and 4.5mg/km of particulate matter (microscopic soot and other waste particles) for all passenger cars. Euro 6 standards will be in place until at least 2021, and the limits they comprise haven’t changed; WLTP has simply toughened up the way cars are measured against them.

WLTP and RDE economy and emissions tests could still be unrealistic

The WLTP/RDE tests for car fuel economy and emissions are unlikely to match real-world figures, according to Mercedes.

Speaking exclusively to Auto Express, Mercedes’ Dr Christoph Höhmann, in charge of Certification of Emissions and Consumption in the EU, said, “It’s not for us to introduce WLTP, but we stand behind it.”

• Real world emissions tests: everything you need to know

Asked if he thought the new test regime was the right thing to do, he continued, “It’s better than the old one. But if the expectation is that everything will be fixed, then in that respect it’s not right.”

Dr Höhmann went on to give an example of the new RDE tests, which includes on-road analysis of emissions with a PEMS device. “The framework [for RDE] does not say when you have to shift gears or whether you should be using items like the air conditioning or heated rear screen during the test,” he told us. “The air con could have a huge effect, but you don’t have to turn it on [in the test] and you will probably have it on in the real world.”

Every new model introduced since September 2017 must have been put through the WLTP testing programme, but every car registered from September 2018 – including existing models – is expected to have been tested and to have had its new figures made available to buyers.

• Eco driving tips: how to save fuel

The new programme aims to provide a more real-world figure for consumers to base their buying decisions on, with the test split into two parts – the laboratory WLTP test and on-road RDE assessment.

WLTP regulations run to over 700 pages, with Mercedes estimating the new regime takes around twice as much effort as testing under NEDC. To avoid any cheating, all WLTP tests are overseen by an independent body, while 50 per cent of the RDE tests have to be carried out by an external organisation. Additional independent tests will also be carried out, although manufacturers won’t know when or where these spot checks will be done.

Now check out our list of the most economical cars on sale...