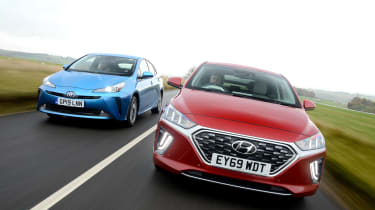 The car industry has found itself stuck between a rock and a hard place in recent years, because both regulations and customers demand more efficient and economical models, yet at the same time begin to reject diesel power.

Hybrids are one way that car makers are tackling this problem, and in recent years there have been more and more models using electric power to complement their combustion engines. Here we’ve brought together two fresh models, although neither is actually an all-new car.

The Hyundai Ioniq Hybrid is the newer of the two, but the Toyota Prius has also been updated this year to keep it relevant. These cars are two natural rivals that are focused heavily on fuel economy and practicality, and our aim here is to find out which is the better buy in 2019. 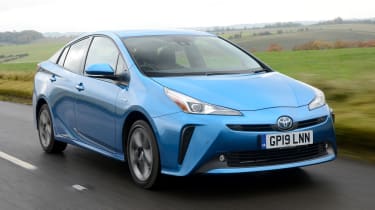 The Toyota Prius is probably the best-known hybrid car in the world, and it has been at the forefront of this tech for decades.

Here, the set-up is the same as in the normal Prius, so it has a 1.8-litre petrol engine and electric motor to deliver a total of 121bhp, but in this AWD car there’s also a second, modest 5.3kW motor on the rear axle to give four-wheel drive.

Don’t expect super levels of off-road performance; it’s there to boost traction at low speeds and is always engaged below 6mph, but between 6-44mph it only works when the car senses front wheelspin. Like all other Toyota hybrids, power is sent to the wheels via a CVT automatic, which doesn’t have gears as such, and moves between ratios continuously instead. 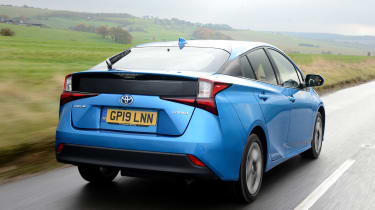 This has efficiency benefits because, theoretically, the CVT can always deliver an optimal gear ratio, although it can cause the engine to drone when you give any more than quarter throttle. In a car like the Prius, however, this isn’t a common occurrence and it works very well. The engine is kept quiet, so even when revs do rise it’s not too unpleasant.

The car sits on the Toyota New Global Architecture (TNGA) platform, which is also used by the C-HR, Corolla and RAV4. It features MacPherson struts at the front and double wishbones at the rear. This high-quality suspension set-up, combined with the Prius’ relatively small wheels and eco tyres, means it rides well. Most cars that ride as smoothly as the Prius on UK roads are much more expensive to buy. It’s comfortable both on the motorway and around town, so it excels on long and short trips.

Yet the Toyota is also relatively good to drive when you encounter some corners, too. The steering is well weighted, there’s enough grip to enjoy maintaining your momentum through bends, and the Toyota is more composed over mid-corner bumps than the Hyundai as well. The electric motor means driving in town is relaxing, because the Prius uses battery power only at low speed, just like the Ioniq. 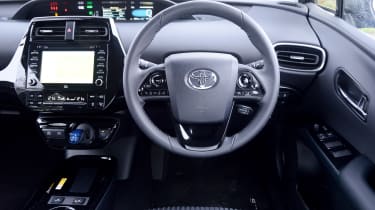 There are a few cheap-looking materials around the cabin and the touchscreen display screen is well behind the Hyundai’s system; while the Ioniq has one of the best infotainment set-ups around, the Prius has one of the worst. It’s slow, frustrating to use and there’s no smartphone integration.

• Infotainment: The system here might have been acceptable 10 years ago, but its sluggish operation, confusing menus and lack of connectivity is poor in a car made in 2019• Gearbox: The CVT transmission in the Toyota works very well for this type of car. It responds best to a relaxed driving style • Materials: While the Prius’ interior isn’t high on perceived quality, the build quality is very good 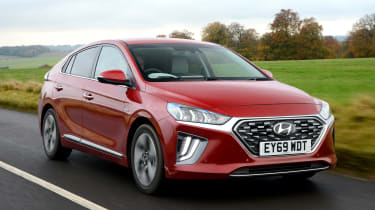 For: Great infotainment system, cheaper than its Toyota rival, easy to driveAgainst: Ride could be smoother, noisier than a Prius, not efficient enough

Hyundai's Ioniq is one of very few models available as a hybrid, plug-in hybrid and full EV, so it’s worth considering which version works for you before you buy. The Prius it rivals here is also available as a plug-in, but not as an EV.

The Ioniq has a 1.6-litre petrol engine and an electric motor. As in the Prius, the 1.56kWh battery is only big enough for a few miles worth of pure-electric running, and in normal driving it switches between this and engine power intelligently and, mostly, without fuss. It’s mainly used for low-speed driving, so around town both cars are easy to drive.

Power is delivered via a dual-clutch automatic gearbox rather than a CVT, which means the Ioniq drives more like a normal automatic car and there’s less unpleasant drone from the engine if you put your foot down. However, the engine is a little noisier than the Prius’ most of the time, and the long economy-focused gearing means it often needs to kick down to make progress. 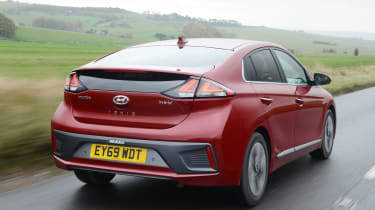 With the CVT-equipped Toyota unable to produce in-gear figures, we recorded 30-50mph and 50-70mph in both cars in their Sport modes. The Ioniq took 3.7 and 5.4 seconds respectively, and the slightly less powerful Prius needed 4.2 and 6.4 seconds. Yet this doesn’t matter too much in the real world, because both cars have sufficient power and performance to feel quick enough, but comfortable and relaxing, which is a key trait.

The Ioniq’s ride isn’t as smooth as the Toyota’s, especially at low speed. The Prius is well controlled and deals with ruts sweetly, while the Hyundai can shudder over some bumps. It settles down at higher speed, but it can’t match the Toyota for comfort.

It’s also not as good to drive, because the Ioniq isn’t as agile as its rival. The steering has no feel at all and is very light, so there’s no satisfaction from driving it; in fact, the Ioniq hybrid is dull even by the standards of economy-focused cars. At least it has a comfortable driving position, and visibility is good, so it’s easy to drive. Wind and road noise is at a similar level to in the Prius, and both are refined. 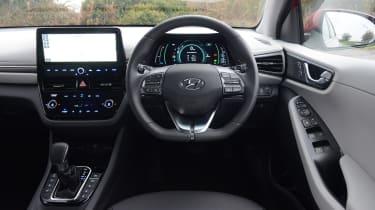 A huge part of the Ioniq’s appeal lies in its new interior, which has been updated for 2019 with one of the best infotainment systems in any car. The new 10.25-inch touchscreen looks superb and is really easy to use, with loads of features plus Android Auto and Apple CarPlay as standard.

• Infotainment: The new widescreen display is responsive and sharp, with an interface that’s easy to understand and colourful. There’s lots of information available, along with a good map• Dashboard: The new dash looks good but is a backward step for useability, because there aren’t enough physical buttons to use• Paddles: You can change the amount of regenerative braking using paddles on the steering wheel, a feature lifted from Hyundai’s EVs 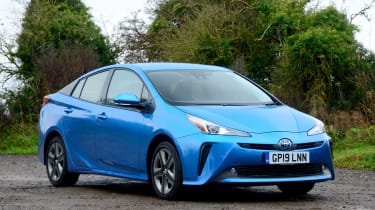 The Prius’ infotainment is poor, but fundamentally it’s a better car than the Ioniq Hybrid. Most importantly, not only is it more economical than its rival, it’s also more comfortable, more spacious and better to drive. There’s no reason to choose an AWD model, though; the 2WD is better value. 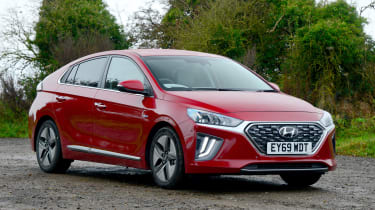 The Ioniq returned lower fuel economy and it’s not as comfortable as the Prius. However, its infotainment is excellent, it’s packed with standard kit and has plenty of passenger space. It makes more sense as a plug-in hybrid, where you can make the most of its all-electric range.