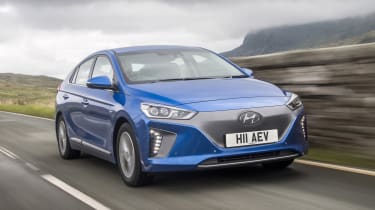 The Hyundai Ioniq is a great electric car, offering enough range for commuting, plenty of space for a family, and a more grown-up feel than a Renault ZOE. It's more upmarket than a Nissan Leaf as well.

The Hyundai Ioniq is finally in the UK, and after enjoying the Hybrid model, we’ve now had the chance to drive the Electric version, which does away with the engine completely. While the Hybrid is a direct rival for the Toyota Prius, the Electric model has cars like the Nissan Leaf, BMW i3 and Kia Soul EV in its sights.

Buyers after an EV will be looking at all of those models, and now there’s a new one to add to the list. Happily, the Ioniq is actually one of the best pure EVs out there, and while it’s not without its problems, it’s more than capable of standing up to its main rivals.

The car’s 174-mile range should be plenty for most EV buyers, and it’s a bit more than a Nissan Leaf (155 miles) offers, too.

The 28kWh Lithium-ion Polymer battery helps the motor generate 119bhp and 295Nm of torque, although that is only available in Sport mode, with Normal and Eco modes keeping some in reserve to help boost the range. In fact, there are plenty of efficient tricks, including a special climate control system, regenerative braking and an aerodynamic body. 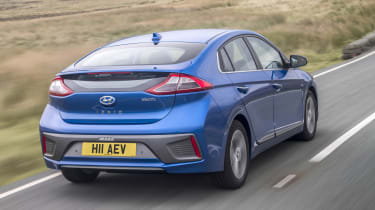 That’s why the electric version looks a bit different: the large grey plastic panel where the grille would be helps move air more efficiently, and those strange-looking wheels do the same thing. Unfortunately the Ioniq doesn’t look as quirky as the Toyota Prius (another aero-focused design), looking more like a conventional petrol car from afar - but it’s certainly not offensive.

Inside it’s more impressive, and while the grey plastics look a little dull, the materials feel good to the touch and there are some copper-coloured accents around the cabin that give a youthful appeal. It feels much more upmarket inside than the Leaf as a result - although not as plush as a BMW i3, which costs a bit more.

It feels similar to a Leaf to drive, with the instant response from the electric motor meaning there’s plenty of around-town performance. It’s not as aggressive off the line as some other electric cars, but it gets up to speed with a whoosh of power. It takes 10.2 seconds to go from 0-62mph, but it’s most impressive from 20-40mph.

Of course it does that all without a peep from the motor, save for a hushed whine and an external hum to warn pedestrians that you’re there. It means that at low speeds the Ioniq feels right at home, being very refined and easy to drive in an urban environment. 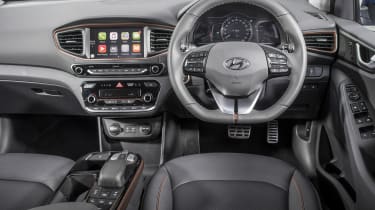 The inconsistent brake pedal is a bit irritating in stop-start traffic, but most of the time you can avoid using it completely thanks to regenerative braking when you lift off the throttle. It’s a relatively novel way of driving, but you quickly adjust to it.

At higher speeds the Ioniq Electric behaves just like any other car: while there’s no sound from the engine, there’s tyre and wind noise are noticeable. It’s no worse than a Prius, but you’ll still have to turn the radio up as you push on.

The ride is settled at motorway speeds, with small lumps taken smoothly. There is a bit of stiffness at lower speed, but it’s not exactly uncomfortable. It means it’s better to drive than a Leaf as well, with the Ioniq resisting body roll better than the Nissan.

The steering lacks feel and the self-centring is inconsistent, but the Ioniq handles tidily enough. It flows well through longer corners, and the electric motor means it’s fun to power out of slower bends, too. It’s not a driver’s car, but you can still have fun. 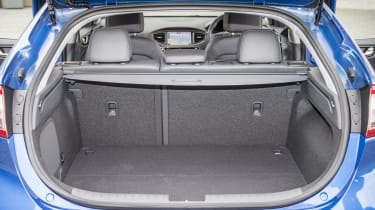 There’s enough space in the back for adults, if not quite as much room as in a Nissan Leaf, and the 350-litre boot increases to 1,410 litres with the rear seats folded down. Neither figure is particularly big thanks to bulky batteries, and some of that space is taken up by the charging kit - but it’s still a useable space.

So while an entry-level Nissan Leaf is a bit cheaper than an Ioniq Electric, the two are very comparable in terms of kit. The Ioniq’s more grown-up feel and longer range means it’s a better overall choice. That said, if it’s a grown-up driving experience you’re looking for, the BMW i3 is definitely worth a look.