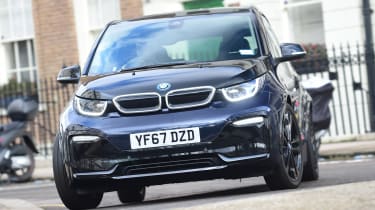 The BMW i3 was designed from the ground up as an eco car and so feels a little more special than its Volkswagen e-Golf rival, which is based around a conventional platform. The BMW is a relaxing, strong performer and more importantly, it mixes incredible efficiency with quality and a greater sense of individuality than rivals like the e-Golf or Nissan Leaf.

With its strikingly contemporary looks and that familiar blue and white badge on its nose, the BMW i3 delivers a new and engaging driving experience, although it does have a firm ride. It’s not just the i3’s efficiency that impresses – the packaging and design make it one of the most user-friendly and appealing electric cars on the market. It may look pricey compared to rivals, but it definitely feels like the premium choice.

The BMW i3 electric hatchback has been around since 2013, yet thanks to its innovative and bespoke design, it still manages to look and feel more advanced than rivals based on regular production models.

The BMW i3 was updated in 2018 with a larger battery. The car came with a 22.6kWh battery at launch in 2013, climbing to 33kWh with a 2016 update – now there’s 42.2kWh battery that’s more in line with those fitted to the latest Nissan Leaf (40kWh) and Hyundai Kona Electric (64kWh). The i3 boasts an official range (measured on the latest WLTP scale) of up to 188 miles – an almost 30 per cent improvement over its predecessor.

There are two versions of the i3 available: a standard car with 168bhp and the i3s, a sportier model with 181bhp. BMW no longer sells hybrid ‘range extender’ models, which used three-cylinder petrol engines to charge the battery on the move.

The i3 is part of a BMW ‘i’ line-up that also includes the stunning i8 coupe and roadster models, while the forthcoming BMW i4 will further expand the range. 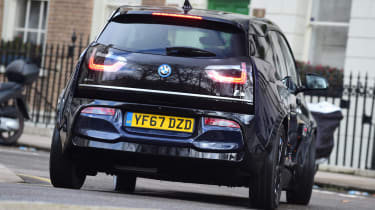 All the ‘i’ models share the ground-up design approach and use advanced construction methods and carbon fibre to keep weight to a minimum. They all have radical styling too, which in the i3’s case means a unique hatchback body with a wheel-at-each-corner design, with rear-hinged rear passenger doors for easier access to the spacious four-seat interior.

While there are gradually increasing numbers of EV and alternative powertrain vehicles on sale in the UK, few can match the road presence and sense of innovation the i3 provides. However, rivals for the i3 with pure electric drive include the Nissan Leaf, Renault Zoe and VW e-Golf.

While the i3 has been on sale in the UK since 2014, there was a round of revisions to the car in 2016. The latest iteration arrived in 2017 along with the sporty i3s, with both getting a small update in 2018 to add a larger battery. The range-extender hybrid was discontinued at this point, so all BMW i3 models are now EVs.

The i3 is the most affordable car in BMW’s ‘i’ line-up, although with prices starting at around the £35,000 mark (excluding Government grant), it's still not exactly cheap. While the i8 offers supercar styling, with its party-piece beetle-wing doors and powerful hybrid drivetrain, the i3 focuses more on practicality and reducing running costs significantly.

For an alternative review of the latest BMW i3 Hatchback visit our sister site carbuyer.co.uk

Small cars come in all kinds of shapes, if not sizes. Here we highlight the best new small cars on sale
BMW i3 Urban Suite concept turns compact EV into luxury lounge 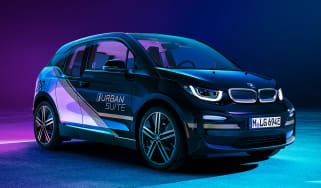 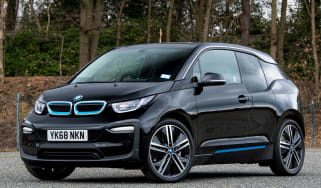 BMW i3 electric car may not be replaced 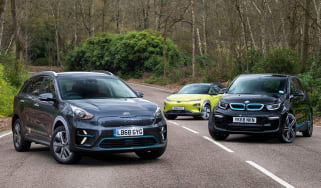 Kia e-Niro vs BMW i3 vs Hyundai Kona Electric

We find out if the new Kia e-Niro or revamped BMW i3 can beat our current EV champion, the Hyundai Kona Electric
Current BMW i3 to get revamp rather than all-new model

Current BMW i3 to get revamp rather than all-new model

The BMW i3 is entering its seventh year of production, but the electric car will continue to be produced with further updates planned
Used BMW i3 review 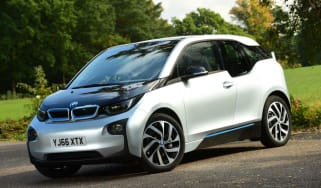 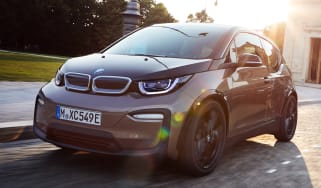 A bigger battery means more range for the updated BMW i3, but can it keep pace with more modern rivals?
BMW i3 updated with more range and new trim options 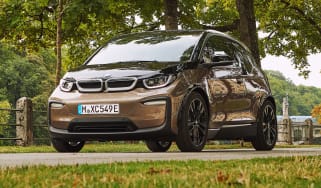 BMW i3 updated with more range and new trim options 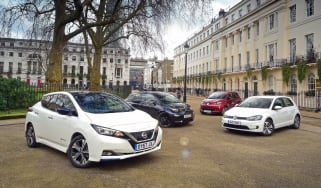 A lot has changed in the EV world since the first Nissan Leaf arrived. We try the Mk2 against the BMW i3, Volkswagen e-Golf and Renault ZOE
Advertisement
Most economical hybrid cars 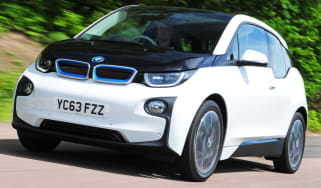 Electrification is sweeping like wildfire across the automotive industry, but which hybrid offers the best economy
New BMW i3s 2018 review 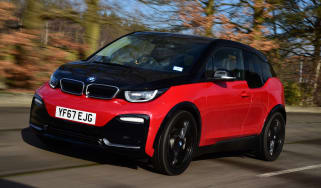 Is the sporty new BMW i3s worth £3k extra? We try the range-extender version to find out…
Advertisement
Hotter BMW i3s revealed alongside facelifted i3 EV at Frankfurt 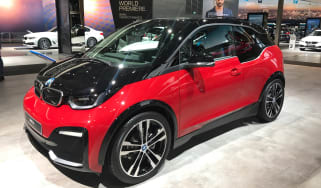 Hotter BMW i3s revealed alongside facelifted i3 EV at Frankfurt

Revised BMW i3 gets improved range, new looks and a hot i3s model capable of 0-62mph in under seven seconds
BMW i3 - best tax-free cars 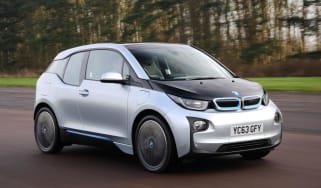 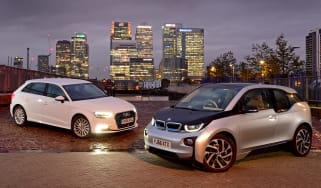 These premium electric cars have both been updated to provide more real-world usability - which is the better buy?
Long-term test review: BMW i3 Range Extender 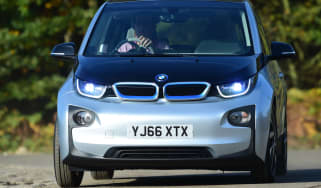 We find out what it's really like to live with an electric car with our new, web exclusive, i3 long-termer
Advertisement
BMW i3 94Ah Range Extender 2016 review 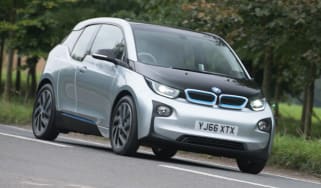 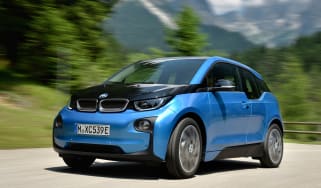 The BMW i3 jumps in price, but upgraded batteries have almost doubled the range and it remains as good to drive as ever
Green Car of the Year 2016: Toyota Prius 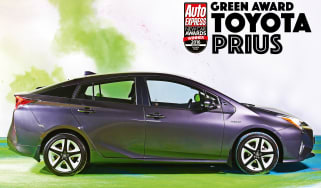 The Toyota Prius is the 2016 Auto Express Green Car of the Year, with the BMW i3 and Kia Niro commended
BMW i3 range to be increased to 195 miles with July updates 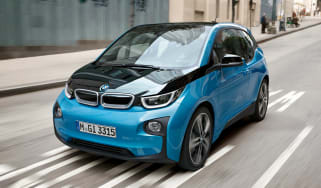 The BMW i3 will get a range increase of between 80 and 100 miles, while DC fast-charging will now come as standard
Can you drive a BMW i3 through London without using the brakes? 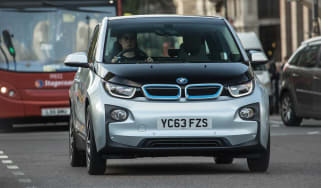 Can you drive a BMW i3 through London without using the brakes?

Is it possible to take on London's roads without using the brake pedal? Find out in our latest video
Audi A3 e-tron vs BMW i3 & Mitsubishi Outlander PHEV 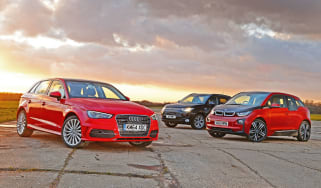 Audi A3 e-tron vs BMW i3 & Mitsubishi Outlander PHEV

Plug-in cars promise great efficiency, but is Audi’s new A3 e-tron hybrid a better bet than range-extending i3 and Outlander?
Advertisement
Kia Soul EV vs BMW i3 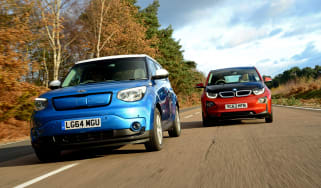 Kia is the latest manufacturer to enter the all-electric small car market with its new Soul EV. Can it take the fight to the BMW i3?
CES 2015: BMW’s laser-guided i3 makes debut 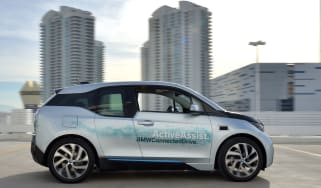