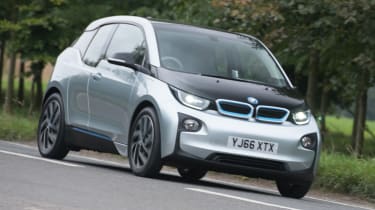 The BMW i3 is a more compelling proposition than ever thanks to its bigger battery pack and improved range. The pure EV version will cost pennies to run, but it’s this REx model that steals the show. Unlike conventional plug-in rivals like the VW Golf GTE, the i3 offers a truly usable electric-only range, allowing you to feasibly avoid using the petrol engine at all. Added kit like DC charging should make it even easier to live with, too.

In a world of increasingly stringent emissions regulations, more and more buyers are considering the purchase of an electric vehicle. Range anxiety remains a problem, however, with many worried about simply running out of juice.

BMW thinks it has the answer. By fitting a denser 94Ah battery pack to its funky looking i3, engineers have almost doubled the car’s all-electric range. Now capable of up to 195 miles, the BMW i3 is more than suitable for the average daily commute.

But what if that’s not enough? What if the thought of being stranded at a motorway service station without access to a plug still terrifies you? Handily, bosses have seen fit to add the bigger battery to the Range Extender model, too. 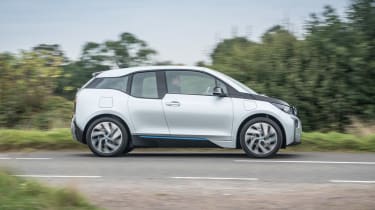 The thing is, it’s not actually any bigger. The 94Ah battery slots into the same space as the old unit – meaning this new model is only marginally heavier than the outgoing car. BMW says it’ll do 288 miles on a single charge and full tank of fuel, charging from empty to 80 per cent full in only 40 minutes.

That super-fast charge time is thanks to the fact that all i3s now get DC Rapid Charge as standard. It’ll still allow you to top up from a standard three-pin wall socket, although that’ll take around 10 hours.

On the road, the i3 drives just as it did before. It has the same playful handling as we’ve grown to expect from a BMW, while the rear-wheel propulsion gives it a sporting edge often missing on competitor cars. The two-cylinder engine feeds the batteries rather than being directly connected to the wheels, meaning you’re never driving solely on petrol power. It’s whisper quiet, too, ticking away in the background without you even noticing. 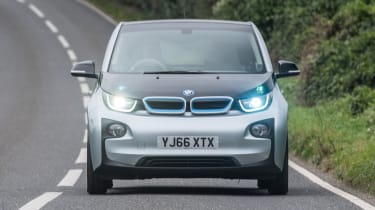 As a result, the BMW i3 always benefits from the electric motor’s instant torque. It offers pleasing acceleration (0-62mph takes 8.1 seconds) – with the ability to surprise some supercars off the line. It tails off at motorway speeds, but still feels comfortable at 70mph.

At these speeds, the i3 does suffer a degree of wind buffeting and there’s noticeable tyre roar, too, but it’s no worse than a Nissan Leaf. That’s the problem with electric cars – the absence of an engine means everything else appears louder. The large, skinny wheels add a firm edge to the ride, too, causing the car to fidget over rougher surfaces. The upright body means it’s also rather susceptible to the odd crosswind.

BMW claims average fuel economy of 470.8mpg, but unlike rivals that depend heavily on their combustion engine, you can drive the i3 on electric without ever calling on the petrol unit. Providing the i3 is sufficiently charged, even a full throttle dash is done in complete silence. Rock-bottom CO2 emissions of 12g/km mean both private buyers and company car drivers will pay the very lowest levels of tax. It’s all helped by the aggressive regenerative braking system which slows the car quickly when you lift off the throttle. While it takes some getting used to, this should have the added benefit of reducing wear and tear over the life of the vehicle. 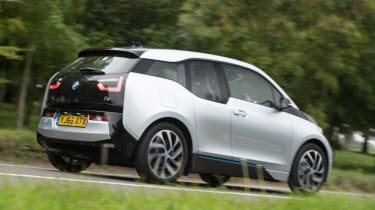 Aside from the improved performance and boosted range, the i3 range also benefits from an additional exterior hue. Protonic Blue first featured on the i8, adding a dose of colour to the otherwise mundane palette. It matches well with the i3’s interior colour schemes – known as ‘worlds’ in the brochure - and all the usual high quality materials and switches are present and correct.

The cabin feels light, bright and spacious, with loads of room up front. The rear-hinged doors allow easy access to the rear, too, so despite the compact body it’s actually surprisingly practical. The 260-litre boot isn’t bad for an electric car, but this expands to 1,100 litres if you fold the rear seats down.